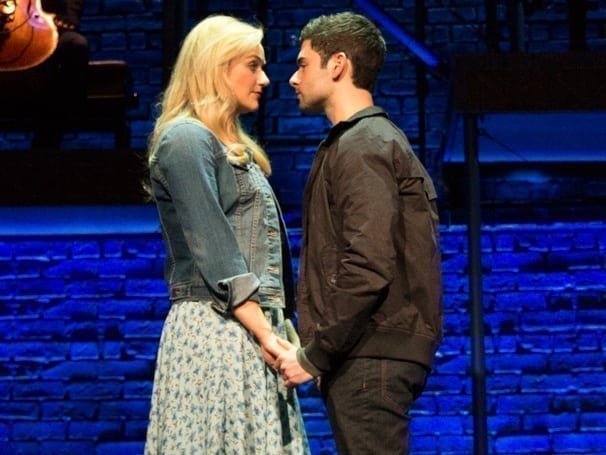 The Last Five Years is still problematic but Kinky Boots is fabulous fun!

Since it vaulted Sherie Rene Scott and Norbert Leo Butz to stardom in 2002, Jason Robert Brown’s The Last Five Years has become incredibly popular in regional, collegiate and community theatres around the country.  This can be directly attributed to Brown’s terrific score and the sensational original cast recording, despite the fact there’s virtually no ‘book’ for the show and it’s more of a song-cycle than an actual musical.  Somewhat strangely (it’s only been ten years, after all), 2econd Stage made the decision to program The Last Five Years in its current season, this time with Brown himself as the director.  The show still doesn’t really work but its score, this time sung by the lovely Betsy Wolfe and the adorable Adam Kantor, continues to shine brightly.  The structural problem with The Last Five Years is that it tells the story of the 5-year relationship of Jamie and Cathy, but it tells it going ‘forward’ for Jamie (Kantor) and going in ‘reverse’ for Cathy (Wolfe).  With the exception of one song when they ‘meet in the middle,’ there’s no interaction between the characters and they’re left to ‘play’ their songs to the air (or to 45-degree angles and the wings, as directed by Brown).  We never really get to know Jamie and Cathy in any depth and, as a result, they remain two-dimensional despite the terrific songs they get to perform.

Based on the wonderful Julian Jarrold film from 2005, the new Broadway musical version of Kinky Boots written by Cyndi Lauper (score) and Harvey Fierstein (book) is tuneful, fabulous fun.  Based on a true story of a Northamptonshire shoe manufacturer who switched from making dress shoes to glamorous high-heeled boots for a transvestite, niche market, Kinky Boots  the musical is surprisingly (and gratifyingly) true to Kinky Boots the film.  Starring the handsome Stark Sands as shoe scion Charlie Price who must save his family’s factory and the divine Billy Porter as the fierce drag queen Lola who serves as Charlie’s fashion muse, Kinky Boots is propelled from beginning to end by a first-rate musical score courtesy of pop icon Lauper.  Filled with hummable melodies, smart lyrics and themes that advance the plot, Lauper’s work is simply terrific – and served up in grand, theatrical fashion by a first-rate cast.  Swiftly directed and ingeniously choreographed by Jerry Mitchell, with terrific music arrangements and orchestrations by Stephen Oremus not to mention delicious costumes by Gregg Barnes, Kinky Boots ‘ message of tolerance and self-acceptance has never been more timely, or more fun!