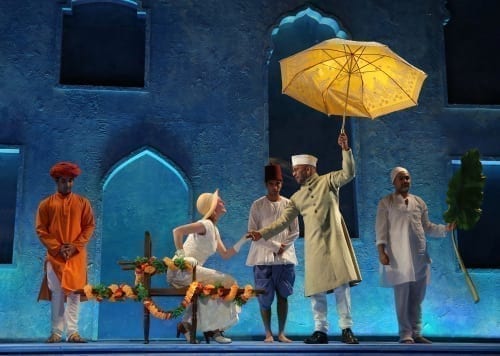 If you love literate, well-crafted plays that are actually about something; plays about ideas and people and politics and love and art and every other manner of substance; in other words, plays that are written by Tom Stoppard – don’t miss the Roundabout’s gorgeous and haunting production of Indian Ink now playing off-Broadway at their intimate Laura Pels Theatre.  Written by Stoppard in 1995 and only now making it’s New York debut, Indian Ink is directed with quiet precision by Casey Perloff (who directed its American debut at ACT in 1999) and performed by a superb company of actors.  It may not be on the same level as Stoppard’s masterpieces, Arcadia and The Invention of Love, but it’s illuminating on its own merits.  And it’s hard to imagine you’ll ever see another production that so perfectly captures the multiple layers of lives the way Perloff’s revival reveals them here. 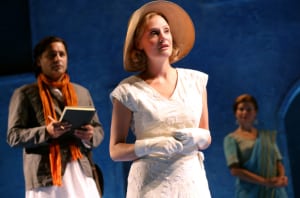 Separated by fifty years and two continents, Indian Ink alternates between scenes of Eleanor Swan in 1980’s England, elegantly portrayed by the legendary Rosemary Harris, an aging former communist who’s now a Tory, and her older sister Flora Crewe, a free-spirited poet accused of obscenity for her racy works, in 1930’s India, played by the luminous Romola Garai making an auspicious American stage debut.  A writer, Eldon Pike, the suitably annoying Neal Huff, has edited Flora’s collected poems to great success, reviving interest in Crew, her life and her work.  Pike visits Eleanor and probes her for information as he now strives to publish Flora’s collected letters in preparation for a full biography – the latter of which horrifies Eleanor’s sensibilities and sense of propriety.  Eleanor is evasive with Pike but is more forthcoming with Anish Das, a suave Bhavesh Patel, who she realizes is the son of Nirad Das, a local Indian artist who painted several portraits of her sister Flora during her time in India – one a formal portrait in oil and one an informal nude sketch which points to a possible, tantalizing relationship between Nirad and Flora, scandalous as that would have been. 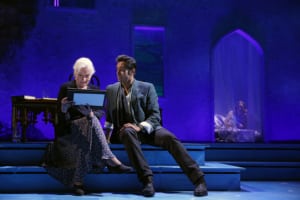 The pivotal role of Nirad is played by the wonderful Firdous Bamji, whose complex, multilayered portrayal of this conflicted man is beautifully rendered.  In their scenes together as Nirad and Flora, Bamji and Garai’s chemistry palpably escalates as their friendship blossoms and deeper feelings begin to surface.  Flora is romanced at the same time by an English military officer and a libidinous rajah, well-played by Lee Aaron Rosen and Rajeev Varma, but Flora is ill with tuberculosis and knows her time is too short for such frivolous trifles.  Throughout the alternating scenes in the 1980’s and 1930’s, Stoppard weaves multiple threads involving the nature of art, the meaning of love and the escalating confrontation between British rule and the subjugation of an Indian people longing to be free of their colonial chains.  The language is evocative and the stakes are provocative – but what else would we expect from Stoppard’s writing.

Though it’s on an off-Broadway scale, the sets by Neil Patel, costumes by Candice Donnelly, lighting by Robert Wierzel and music & sound by Dan Moses Schreier are wonderfully evocative without being distracting or showy.  Garai is irresistible as the wounded moth flying to close to the flame, and – at an astonishing 87 years of age (playing a woman who’s 75) – Rosemary Harris remains one of the towering actresses of the American theatre.  The chance to witness the two of them together should be more enticement than anyone can resist.