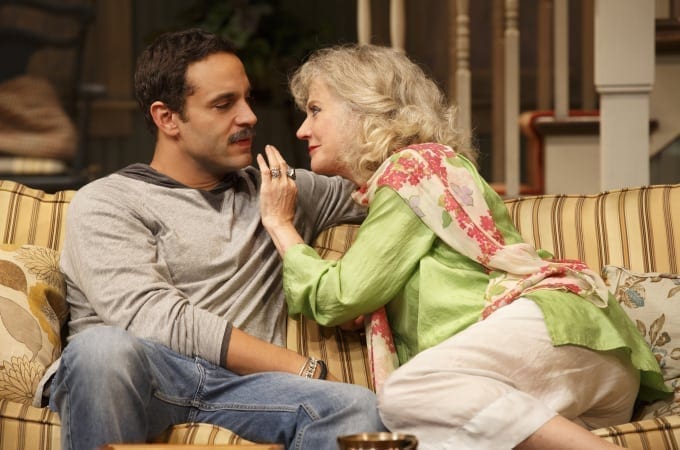 It’s hard to believe the same playwright who wrote the insightful Time Stands Still, Sight Unseen, Collected Stories and Dinner with Friends (for which he won the Pulitzer Prize) also wrote the clunky melodrama The Country House, but Donald Margulies is that playwright.  A vehicle for the vibrant Blythe Danner, The Country House is on view  thru November 23 at  MTC’s Samuel J. Friedman Theatre (formerly The Biltmore), but it’s disappointing viewing for anyone who’s admired Margulies’ previous work. 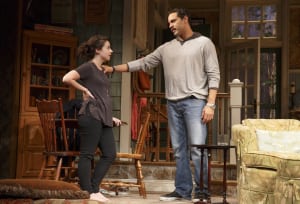 An homage to Chekhov’s The Seagull, Uncle Vanya and The Cherry Orchard posing as a Lifetime movie-of-the-week, The Country House revolves around a theatrical family led by their matriarch, Anna Patterson, a celebrated stage actress played by Danner with all her attendant glamour.  The family has gathered together on the anniversary of the death of Anna’s daughter, Kathy, a brilliant film actress whose death from lung cancer at 41 has wrecked havoc with the clan.  In attendance are: Kathy’s husband, Walter Keegan, played with matter-of-fact certainty by David Rasche; Walter’s new fiancee, Nell McNally, a lithe and detached Kate Jennings Grant; Kathy and Walter’s daughter Susie, a sharp and sassy Sarah Steele who’s a scene-stealer; and Kathy’s emotionally damaged brother, Elliot Cooper, played with scenery-chewing gusto by Eric Lange who is excellent despite this thankless role. 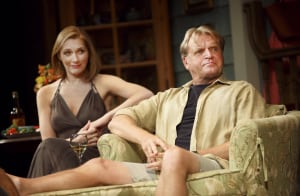 Set in Williamstown, Mass., at the start of the summer theatre festival (a case of art imitating life, in the case of the Danner), Anna is about to start rehearsals for a production of Shaw’s Mrs. Warren’s Profession, when she runs into an old family friend and fellow actor, Michael Astor, portrayed with a welcome surplus of charisma by the handsome Daniel Sunjata.  Michael, a one-time paramour of the late Kathy, is now rich and successful from a ridiculous sci-fi medical drama on television and is in town to flex his acting muscles in a production of Molnar’s The Guardsman.  Anna invites him to spend a few days at her place while his place is “aired out” after a fumigation, allowing Michael to set every female’s heart aflutter.  Thanks to Sunjata, this may be the one believable plot point in Margulies’ potboiler. 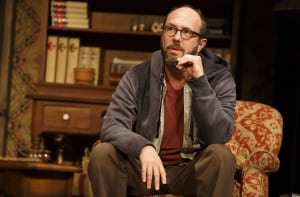 A clumsy mix of comedy and drama ensues with the disgruntled Elliot taking center stage in the play’s overwrought second act.  We learn quickly that Elliot, Margulies’ stand-in for Konstantin and Uncle Vanya, is a failure at everything.  His dead sister was his best (and, apparently only) friend, his mommy never loved him (we hear a lot about that), and it just so happens Nell turns out to be the girl Elliot fell in love with during a 6-week stint at The Human Festival in Louisville many years ago (yawn).  Elliot has now given up acting and has written a self-indulgent play that gets a reading by the group which ends in a bitter, dressing down of Elliot by Walter.  This denunciation gives Margulies a chance to rant about theatre, film, and ‘selling out’ in a merciless business.  Rasche sells well but it all feels manufactured and contrived.  Theatre-folk are just too easy a target and people simply don’t talk this way in real life.  But ‘real life’ was clearly not Margulies’ goal in The Country House.  Have none of these people ever heard of therapy?