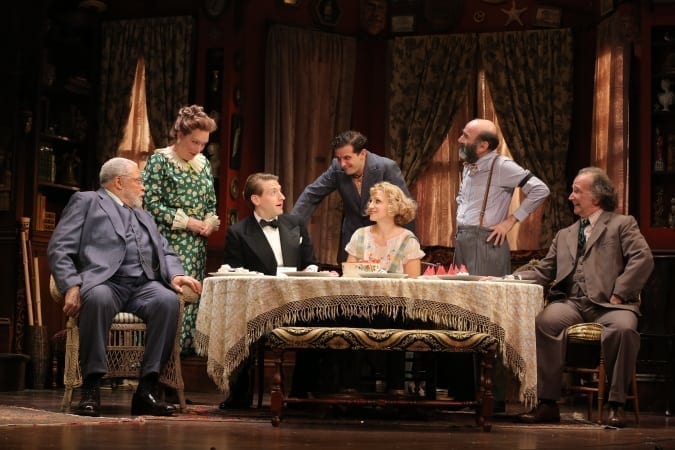 It’s been a long time since there was such a silly, joyous romp of a play on Broadway, but the new revival of You Can’t Take It With You hits all the right bells and blows all the right whistles!  Directed with clockwork precision by Scott Ellis on a jaw-dropping set by David Rockwell, the crackerjack cast of comedy professionals seem to be having a devilishly good time on-stage together and the results are laughter-nirvana for the audience. 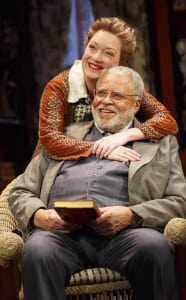 Kristine Nielsen & James Earl Jones in “You Can’t Take It With You” (photo: Joan Marcus)

First written in 1936 when it won the Pulitzer Prize, Kaufman & Hart’s outrageous farce about a mixed-up family of lunatics, the Sycamores, is deceptive in its difficulty, as anyone who’s sat thru a lugubrious high school or community theatre production can attest.  You Can’t Take It With You is best described as an extremely delicate soufflé; each ingredient must be added in just the right amounts and the dessert must be baked at just the right temperature for it to come out perfectly.  Such is the case with this revival, which Ellis and the company have whipped up in their kitchen with utter perfection and sly attention to detail. 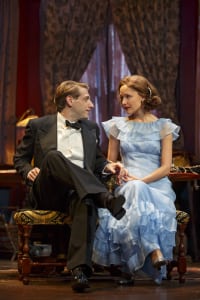 Fran Kranz & Rose Byrne in “You Can’t Take It With You” (photo: Joan Marcus)

Leading the company is the sublime Kristine Nielsen, a recent Tony nominee for Vanya and Sonia and Masha and Spike, who may well be giving the greatest performance of her career.  All her trademark tics, takes and mannerisms are softened in Penelope Sycamore, whether she’s stroking a baby kitten while typing her latest play, or interrogating her daughter’s new beau.  She can wring laughter out of a raised eyebrow and break your heart with her tear-stained  sadness.  Nielsen is – in a word – perfection.  That daughter and beau, Alice Sycamore and Tony Kirby, are terrifically played by Rose Byrne of Damages, making her New York stage debut, and Fran Kranz.  Byrne and Kranz bring just the right amount of wide-eyed innocence and optimism to the sprawl of chaos going on around them and it’s easy to root for their budding engagement to succeed. 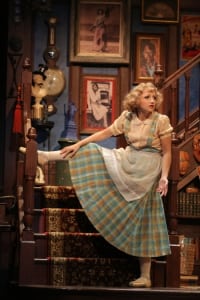 Annaleigh Ashford in “You Can’t Take It With You” (photo: Joan Marcus)

Their biggest cheerleaders would have to be Essie Sycamore and her husband Ed, played with outrageous hilarity by the brilliant Annaleigh Ashford, whose oblivious ballet “dancing” is a highlight each time she goes up on pointe in her toe-shoes, and the eye-popping Will Brill, whose bag of visual tricks seems limitless.  Rounding out the Sycamore family are Mark Linn-Baker as Penelope’s fireworks manufacturing husband Paul and all-around mensch, his trusty assistant Mr. DePinna, a spot-on Patrick Kerr, and the great James Earl Jones as the wise, old patriarch and Penelope’s father, Martin Vanderhof.  The fact that Martin has stopped paying his federal income taxes years ago is only one of many plot points that regularly draw big laughs from Jones’ sly and insouciant delivery.  He is a man at piece with himself and world, a fact which underscores Kaufman & Hart’s ingenious writing and makes You Can’t Take It With You as timeless as it is.

The rest of the supporting cast is filled with so many delicious and daffy performances it’s hard to know where to begin.  A good place would be with Julie Halston’s hilarious turn as Gay Wellington, a soused actress who comes home with Penelope to read her latest play but ends up passed out in the Sycamore’s living room.  Halston, a summa cum laude graduate of the Charles Busch School of the Performing Arts, has long been a master of the double-take and the perfectly timed sardonic retort.  Here she milks every drop of comedy out of multiple bits of stage business, including her crawling up a flight of stairs that has to be seen to be believed.  She is utterly shameless and the audience laps up every drop of cream. 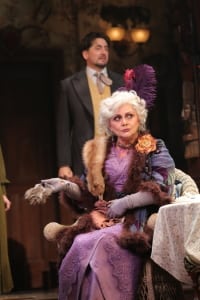 Reg Rogers & Elizabeth Ashley in “You Can’t Take It With You” (photo: Joan Marcus)

More subdued, but equally delicious, are Byron Jennings and Johanna Day as Tony’s parents, Mr. & Mrs. Kirby.  As scions of upper-crust society, their reactions and shock at the revelations an evening at the Sycamore’s house brings are delightful additions to the mayhem that abounds.  Throw in a sassy maid and her unmarried boyfriend, Rheba and Donald, the terrific Crystal Dickinson and Marc Damon Johnson, the Russian dance-instructor Boris Kolenkhov in the guise of the side-splitting Reg Rogers, and the scrumptious Elizabeth Ashley as the Grand Duchess Olga Katrina (who whips up some mean blintzes in the kitchen) and you have a recipe for 2 1/2 hours of hilarity that ends with a sweetness that defines the word heartwarming.