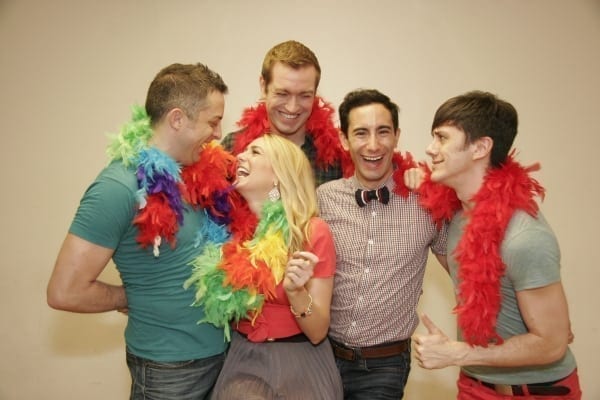 Boys Will Be Boys and Murder For Two

If the ‘revue’ is the most difficult of all theatrical genres to pull off, a ‘gay revue’ may be almost impossible.  This was recently evidenced by the well meaning but lightweight Boys Will Be Boys staged as part of this year’s New York Musical Theatre Festival (NYMF).  Written by Kenneth Kacmar (music) and Joe Miloscia (book and lyrics), Boys Will Be Boys is subtitled “An OUT-rageous Musical Revue!,” but the problem is it’s neither that outrageous nor that musical.  It desperately wants to be either of Howard Crabtree’s brilliant creations, Whoop-Dee-Doo! or When Pigs Fly, but those shows are in a class by themselves, setting the bar for future gay revues impossibly high.  Though it has a few funny moments and a hard-working cast, Boys Will Be Boys lacks bite, savvy, and, most importantly, relevancy.  In an era of expanding gay rights and gay marriage, Miloscia and Kacmar don’t seem to have anything to say about gay men today, and that’s a problem.  It’s not enough to give us stereotypes that are ‘out and proud’ if they have nothing to say, even if it’s done with love and good humor.  We’ve seen everything in Boys before, but done far better with more style and wit.  It doesn’t take much imagination to craft parodies of songs like “Sisters,” “Somewhere That’s Green” or “Some People,” especially when they’re next to smarter, original material like “Balls,” “Marry Me Anyway” and “Giant”.  Boys Will Be Boys debuted at The Duplex back in 2006 and has been kicking around the country ever since.  Based on its latest NYMF outing it’s time to give these Boys a rest.

Depending on your tolerance for camp acting, the disposable Murder For Two may be the longest 90 minutes you’ve ever spent in the theatre.  Directed with a leaden hand by Scott Schwartz, Murder is a two-hander whodunit that wants to be The 39 Steps by way of The Mystery of Irma Vep.  If only it succeeded; alas, it only exhausts.  The adorable Brett Ryback plays a police officer trying to solve a murder in order to get promoted to detective, while the over-the-top Jeff Blumenkrantz plays a baker’s dozen worth of suspects – each a chance to chew what little scenery there is in the theatre.  The gimmick?  Both actors play the piano (quite well, actually) and accompany themselves and each other at the center-stage Steinway when they’re not racing around like maniacs.  The point?  Good question.  Written by Joe Kinosian (who also co-starred in the 2011 Chicago production as ‘The Suspects’) and Kellen Blair, Murder For Two elicits admiration for the stamina of its cast more than anything else.