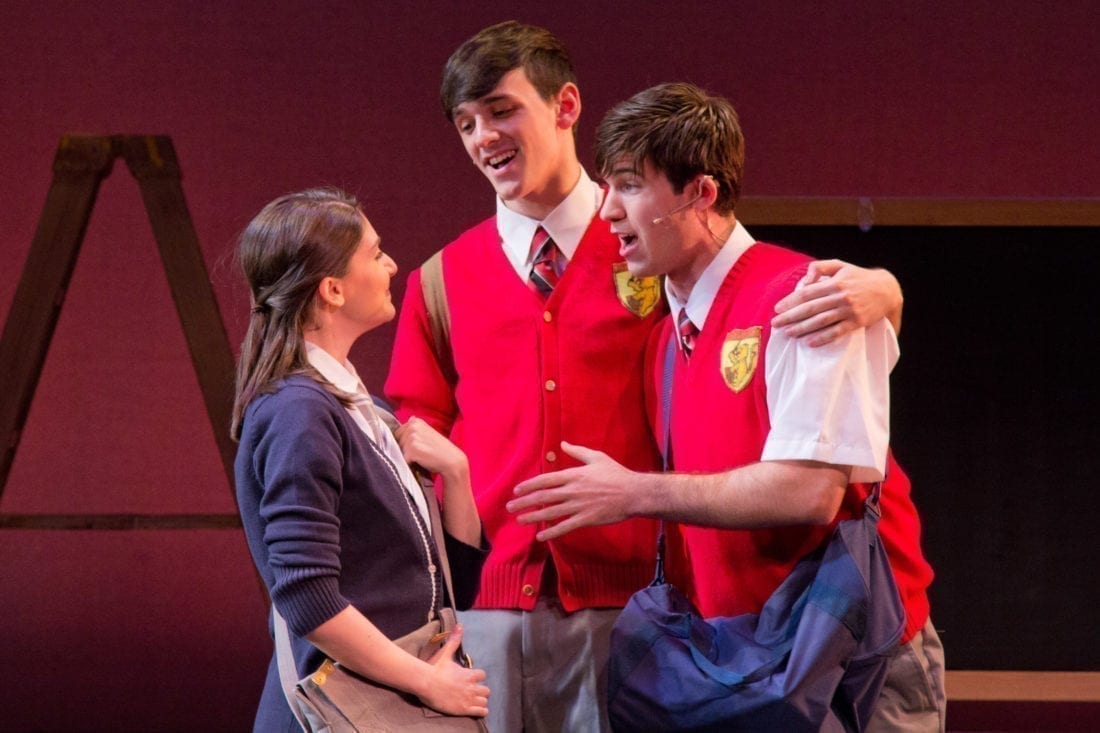 Nobody Loves You and Crossing Swords

Nobody’s cast is terrific, and Crossing Swords has potential

It’s a shame the score and book for Nobody Loves You at 2econd Stage aren’t as good as the cast who are knocking themselves out trying to breathe life into it.  It’s not unwatchable, but Nobody Loves You really only succeeds due to the strength of its multitalented cast.  The show, written by Itamar Moses (book & lyrics) and Gaby Alter (music & lyrics), is a spoof of our country’s obsession with television reality shows, but it lacks both the wit and bite of inspired satire to consistently hit its mark.  The setup is as ridiculous (and predictable) as its conclusion: Jeff, a doctoral student in ontology (yeah, right) argues with his girlfriend Nina about the reality show ‘Nobody Loves You’ and she promptly walks out on him, announcing her intention to audition as a contestant for the next season of the show.  To win her back Jeff auditions for the show too and is chosen while Nina is not.  Jeff initially tries to quit but decides to stay to both expose the show as a fake, and to utilize his observations of the contestants as part of his dissertation.   Despite his best intentions, Jeff falls for Jenny, a staffer on the show who is a budding filmmaker working in television to pay the bills.  He additionally becomes a breakout star, which pleases the show’s savvy producer Tanya and dim-witted host Byron and irritates his competition on the show, Christian, Megan and Samantha.  And since this is a musical everything is set to song, in this case, sadly, unmemorable ones.

As Jeff, Bryan Fenkart has charm and presence though he needs to find a good vocal coach who can teach him how to support his sound from his diaphragm and not from his throat.  As Jenny, his love interest, Aleque Reid brings an understated cynicism and alluring appeal to what could easily be a thankless role.  Roe Hartrampf and Lauren Molina are spot-on as fellow contestants Christian (a religious virgin) and Megan (a slutty tramp), but Autumn Hurlbert is too mannered and obvious as the odd-girl out, Samantha.  Three cast members, however, really steal the show.  As the show’s emcee Byron, Health Calvert is deliciously ‘bad’ as a smarmy, oblivious, pretty-boy.  The hilarious Rory O’Malley (a Tony nominee from The Book of Mormon) is a virtual Greek chorus of laughter as Jenny’s gay, blogger roommate, and the divine Leslie Kritzer kills in a trio of roles, primarily the show’s producer Tanya, though her vocal gifts are woefully underutilized.  In another time, composers would be lining up to write roles for a talent like Kritzer so it’s a sad comment on our times she’s not starring in one big splashy musical after another.

Though it’s far from perfect, after sitting through a few other terrible NYMF shows this year, Joe Slabe’s Crossing Swords seemed like a masterpiece.  A cute, coming-of-age tuner about an all boy’s school joining an all girl’s school for a production of “Cyrano de Bergerac,” most of Slabe’s book and score work beautifully especially as performed by a very strong cast.  Jeremy and David, the ideal Lyle Colby Mackston and Marrick Smith, are best friends but David doesn’t realize that Jeremy’s love for him is far more than platonic.  When they’re cast as Cyrano and Christian in “Cyrano,” David promptly falls for the girl playing Roxanne, Nicky, but Nicky, the adept Ali Gordon, find herself attracted to the actor playing Cyrano (Jeremy) instead of the hunky Christian (David).   There’s a simultaneous storyline involving the girl’s drama teacher Miss Daignault and the boy’s chaperone Sir, persuasively portrayed by Linda Balgord and Steven Hauck.  But their scenes bog down the action and Slabe’s use of a flashback device that bookends the show feels both tired and unnecessary.  Still, though it’s too long and a few numbers feel contrived (particularly “The Three of Us”), Crossing Swords made for a charming new musical with potential.