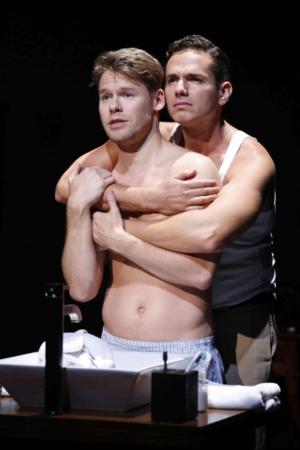 Summer Shorts – Series A and Harbor

Summer Shorts is truly awful and Harbor isn’t much better!

The Summer Shorts series has hit a new low with the three one-acts that comprise Series A this year.  In Good Luck (in Farsi), Neil LaBute turns his poison pen on two actresses, Kate and Paige, waiting in a hallway to audition for a television show.  As cattiness turns to bitchiness, the two girls agree on how difficult it is being ‘beautiful’ while trying to psych each other out before going in to audition.  The play goes nowhere and has no point.  Further, the dialogue is ridiculous, the acting unbelievable and several of the jokes downright racist.  Leave it to LaBute to write a one-act about two beautiful women being hateful and nasty to each other.  Worse is Lucas Hnath’s About A Woman Named Sarah.  Directed with no imagination by Eric Hoff, the Sarah in question is Sarah Palin and Hnath imagines a series of conversations when Palin met John McCain for the first time.  It’s filled with short, staccato sentences and someone off-stage banging on claves to irritating and dubious effect.  Like LaBute, Hnath doesn’t have a point except to tell us what we already know. But Series A saves the worst for last in Tina Howe’s Breaking the Spell, a mind numbing retelling of Sleeping Beauty that is torture to watch.  Howe’s not saying anything new about either Sleeping Beauty or fairytales, so what’s the point.   I understand the three plays in Series B are better than Series A, but sitting through the first set was so dispiriting I couldn’t bring myself to return for a second helping.

A semi-hit last fall when it premiered in Westport, Chad Beguelin’s Harbor opens Primary Stages season with a whimper.  Beguelin, who penned the lyrics for the vile musicals The Wedding Singer and Elf, has a great idea for his first straight play – a gay couple in Sag Harbor, resolved to remain childless, are forced to grapple with parenthood when one of their sisters arrives pregnant with a 15-year old daughter in tow.  Directed by Mark Lamos, Harbor is slick on its surface but hollow at its core.  It also suffers from the recasting of the central role of Kevin from the gifted Bobby Steggert at Westport to Randy Harrison here.  Though still adorable (from his Queer As Folk days), Harrison simply isn’t a strong enough actor to carry a play and that fact sinks Harbor quickly.  Beguelin’s unbelievable dialogue spirals out of control until a surprising, twist ending adds a dose of pathos to his contrived characters and their longings.