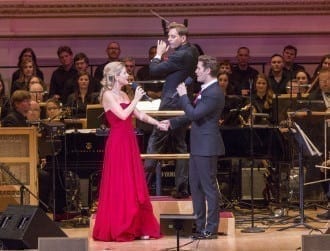 Of all the concerts on their yearly calendar, The New York Pops holiday concert is easily the most anticipated of the season.  On December 19th & 20th, under the astute leadership of Steven Reineke, high expectations were met and surpassed with the shrewd inclusion of Broadway stars Kelli O’Hara and Matthew Morrison, reuniting again at Carnegie after having starred together in the ravishing The Light in the Piazza (2005) and the sumptuous South Pacific revival (2008) – both at Lincoln Center Theatre.

Clearly delighted to be performing together again, O’Hara & Morrison’s on-stage chemistry was in full bloom under Reineke’s baton.  They essayed their way thru the obligatory “Baby, It’s Cold Outside” (arr. Fred Barton) and a fun version of “Let It Snow! Let It Snow! Let It Snow!” (arr. Chris Walden & Brad Ellis) before tackling some solos.  It was nice to hear Morrison sing ‘live’ again after his years on Glee and he progressively regained his Broadway chops with each song he performed.  A medley of “I’ll Be Home for Christmas” and “Mele Kalikimaka” (arr. Chris Walden) allowed him to pay tribute to Hawaii, a state he loves, has spent a lot of time in, and in which he just recently got married.  And though his jazzy arrangement of “Younger Than Springtime” (arr. Chris Walden) wasn’t to my taste, his sweet, mellifluous tenor sounded both lovely and assured.  For her part, O’Hara, stunning in two different gowns, was in exquisite voice on a wistful version of “I Wonder as I Wander” (arr. Steven Reineke) in act one, and brought the house down in an over-the-top rendition of “O Holy Night” (arr. David T. Clydesdale) that built to a jaw-dropping high D-flat which O’Hara sang with radiant brilliance.

Interspersed between solos were two more duets for the long-time friends in act two.  First the “Balcony Scene (Tonight)” from West Side Story and then “Believe” from The Polar Express (arr. Fred Barton & Jack Everly).  Now, what the classic balcony scene from West Side Story has to do with the holidays is anyone’s guess – but who cares!  With the glorious, symphonic Pops orchestra playing underneath their voices, O’Hara and Morrison made magic singing Bernstein & Sondheim’s achingly beautiful paean to young love.  It was interesting to hear Morrison audibly raise his game – vocally – in “Tonight”; he seemed to remember he’s done a lot of legit singing over the years and it all came back to him like riding a bike.  Together, their version was thrilling. Slightly less so with “Believe” which may work better as a solo (Josh Groban had a hit with it) than as a duet, despite the fact it’s a very pretty song.

For their part, Judith Clurman’s usually superb Essential Voices USA once again sounded wonderful, but their diction wasn’t as crisp as it usually is, especially their dental-ized consonants (d’s, t’s, k’s, etc.).  Yes, we all know songs like Jerry Herman’s “We Need a Little Christmas” (arr. Robert Wendel) and “It’s the Most Wonderful Time of the Year” (arr. Steven Reineke), but you’ve got to spit out those consonants if the words are going to be clear to the audience.  One notable exception was “Songs of Freedom: A Celebration of Chanukah” which was as lively as it was well enunciated.  It should also be noted that the soloist on the Chanukah medley, Arlo Hill, sang with a gorgeous lyric baritone that added enormously to the piece.

Throughout, the Pops played magnificently for maestro Reineke – as it always seems to do these days.  Their winter and spring programs should be circled in red on everyone’s calendars!

One Night Only: Sutton Foster