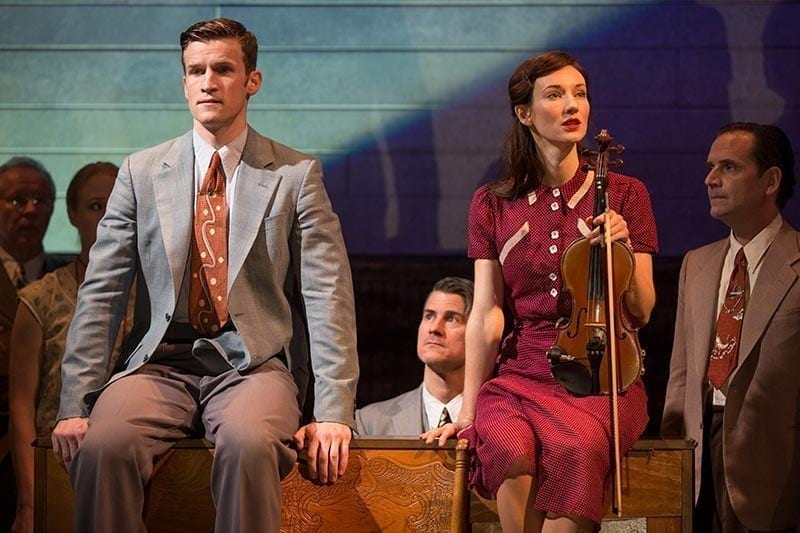 Rodgers & Hammerstein’s experimental musical Allegro (1947) divided the critics and was the team’s first indisputable ‘flop’.  Heavily influenced by Thornton Wilder’s Our Town,  Allegro tells the story of ‘everyman’ Joseph Taylor, Jr., from birth to adulthood, and it was the first musical to employ a singing and dancing ensemble to function as a Greek chorus, commenting on the action and the interior thoughts of the show’s protagonist.  Following R&H smashes Oklahoma (1943) and Carousel (1945),  Allegro had the largest advance of it’s day and ran almost a year.  But its preachy, moralistic tale about big-city success corrupting small-town values didn’t sit well with audiences and the songwriting team went on to future success with South Pacific (1949), The King & I (1951), Flower Drug Song (1958) and The Sound of Music (1959).

Allegro basically disappeared until it was included in the first season of City Center Encores! in 1994 starring Jonathan Hadary, Karen Ziemba, Celeste Holm and Stephen Bogardus.  And in 2009, to the delight of purists and and cast album collectors, Broadway Masterworks released the first complete recording of Allegro‘s score with a star-studded cast that included Nathan Gunn, Audra McDonald, Marni Nixon, Laura Benanti and Patrick Wilson.  With only one stand-out song in the show, “The Gentleman Is A Dope,” and three that are tuneful, “A Fellow Needs a Girl,” “So Far” and “You Are Never Away,” the rest of the score if dull and forgettable.  Couple that with the fact the story is plodding and devoid of dramatic tension means Allegro is a touch sell no matter what you do with it.

Classic Stage Company’s (CSC) misguided idea for a revival of Allegro has included hiring John Doyle to direct and the results are as pretentious as they are tedious.  As he did in Sweeney Todd  and Company, Doyle has hired a very talented cast who all play instruments and double as the show’s orchestra.  It may be a cost-savings for CSC but it does nothing for Allegro, especially the poor actors who are dragging around violins and cellos the entire show.  Doyle’s other decision, perhaps a wise one, was to eliminate an enormous amount of the score and book.  A 3-hour show is now a trim, intermission-less 90 minutes, but it still feels like 3 hours thanks to Doyle’s clunky staging and emotionless direction.

The CSC’s revival’s saving grace is its cast which is wonderful in spite of Doyle’s stripped-down production.  The handsome and charismatic Claybourne Elder plays Joseph Taylor, Jr., while Malcolm Gets (who also plays the piano for most of the show) is his father and Jessica Taylor Wright portrays his mother.  Though she’s saddled with a violin under her chin the majority of the show, Elizabeth A. Davis does her best to be Joseph’s love-interest Jenny Brinker.

For musical theatre completists who have never seen Allegro or don’t own the Masterworks recording, the CSC revival may be a necessity.  For everyone else, there are better ways to take a nap.