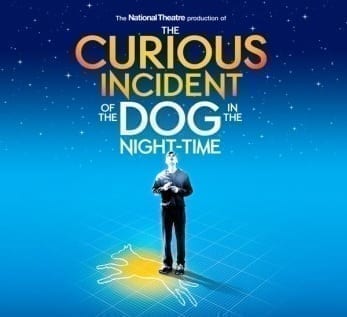 The Curious Incident of the Dog in the Night-Time ★★★★☆

A smash hit in London where it won seven Olivier Awards (including Best Play) and is still running in the West End, The Curious Incident of the Dog in the Night-Time has now conquered Broadway where it’s a smash hit at The Barrymore.  Based on Mark Haddon’s critically and popularly acclaimed 2003 book of the same name, Curious Incident… tells the story of Christopher John Francis Boone, a 15-year old boy living with Asperger’s Syndrome (or, if you prefer, autistic spectrum condition or savant syndrome).  At the play’s outset, Christopher, who’s high functioning – especially with numbers – but has some behavioral eccentricities, discovers the body of Wellington, his neighbor’s large, black poodle, who’s been brutally killed with a garden fork.  Christopher vows to track down Wellington’s killer but, in doing so, he inadvertently makes discoveries about his father and mother that will completely upend his life and world.  And that’s just the first act.  The second act finds Christopher making his way to London – on his own – on a journey of personal discovery that challenges him to the core of his being. 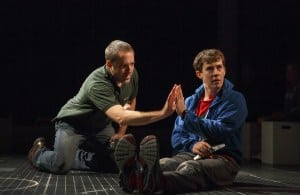 Ian Barford & Alex Sharp in “The Curious Incident of the Dog in the Night-Time” (photo: Joan Marcus)

As envisioned and staged by the brilliant director, Marianne Elliott (a Tony-winner for War Horse), on an eye-popping set by Bunny Christie with dazzling lighting by Paule Constable and imaginative video courtesy of Finn Ross, the role of Christopher is as physically exhaustive as it is emotionally draining.  Starring in the Broadway incarnation as Christopher is Alex Sharp, who just graduated from Julliard in May, and is utterly sensational in the part.  (Note: Taylor Trensch performs Christopher at certain performances.)  Sharp completely inhabits the role in every conceivable manner; verbally, physically and sensorially as he becomes Christopher right before our eyes.  It is as impressive as it is ultimately moving. 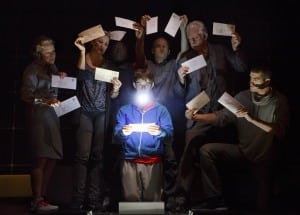 The ensemble surrounding Sharp (and Trensch) is equally wonderful.  As Ed and Judy, Christopher’s parents, both Ian Barford and Enid Graham are superb.  As his mentor and teacher at school, Francesca Faridany is cool and collected as Siobhan.  And, in a variety of supporting roles including Mrs. Alexander, one of Christopher’s neighbors, it’s a treat to see Helen Carey (a Tony-nominee for her bravura turn in London Assurance) on-stage again.  As an aside, it’s worth noting the staging at The National in London was originally ‘in-the-round’ and was captured on film for their NTLive broadcast series which I saw on its initial airing here in New York.  The staging for the West End production and now the Broadway production is geared for a proscenium stage and is obviously quite different.  It’s a shame the Broadway production couldn’t secure the Circle in the Square theatre as it would have been ideal for Elliott’s vision for Curious Incident.  To be sure, it’s still a wonderful, moving production, but it’s impact is lessened slightly by not being in a 360-degree space. 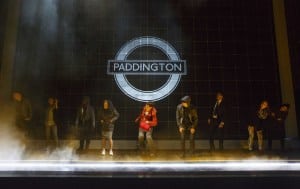 Alex Sharp (center in red) and company in “The Curious Incident of the Dog in the Night-Time” (photo: Joan Marcus)

Mark Haddon has said that Curious Incident isn’t a book about Asperger’s or autism.  “…it’s a novel about difference, about being an outsider, about seeing the world in a surprising and revealing way.”  This splendid production of Haddon’s novel sees the world in surprising, revealing ways, indeed.