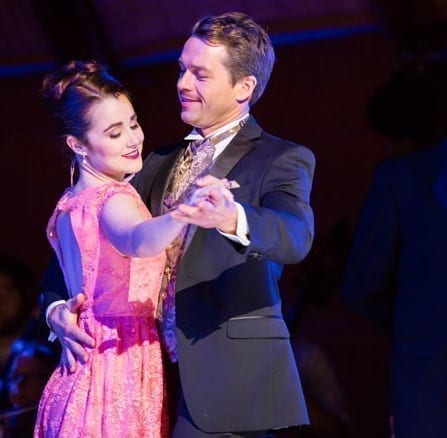 The New York Philharmonic served up an uneven concert production of Show Boat last weekend that, despite some wonderful individual performances, was disappointing overall.  Following the Philharmonic’s recent forays into musical theatre with Company in 2011, Carousel in 2013 and Sweeney Todd in 2014 (we won’t talk about the misguided Camelot in 2008), the expectations for Show Boat were high, but their semi-staged, in-concert production only partially delivered.   The orchestra – as always – sounded magnificent under the direction of Ted Sperling.  But while Sperling makes a wonderful musical director, based on the show’s clumsy staging and lack of dramatic tension he has no business acting as a stage director. 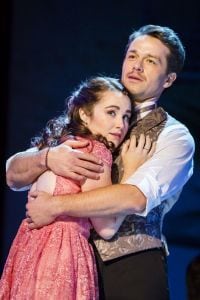 First what worked.  The handsome star of London’s West End, Julian Ovenden, made a dashing Gaylord Ravenal opposite the gorgeous Lauren Worsham as Magnolia Hawks.  With his magnificent, lyric tenor and her impressive soprano, they soared into the stratosphere on some of the most glorious duets ever written for the musical theatre.  Singing Kern & Hammerstein’s “Make Believe,” “You Are Love,” and “Why Do I Love You?,” Ovenden & Worsham were an ideal pairing that was as dramatically ideal as it was musically thrilling. 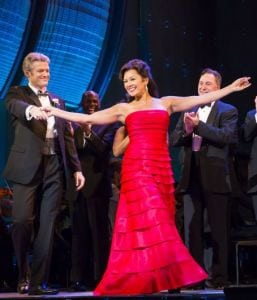 Portraying the doomed singer Julie Baker, the gorgeous Vanessa Williams displayed strength and vulnerability in equal measure.  Williams’ lovely voice sounded rich and full as she essayed the classic “Can’t Help Lovin’ Dat Man” and “Bill.”  Following stints in The Kiss of the Spider Woman, Into the Woods, Sondheim on Sondheim, The Trip to Bountiful and After Midnight how nice it would be if Williams came back to Broadway again in, well…anything.  Also terrific were the secondary leads Ellie & Frank, portrayed with wit and flash by Broadway pro’s Alli Mauzey (It’s A Bird…It’s A Plane…It’s Superman and Cry-Baby) and Christopher Fitzgerald (Finian’s Rainbow and Young Frankenstein).  They managed to get all their laughs despite some lackluster choreography for them in their second act feature, “Goodbye, My Lady Love.”  Finally, the sassy NaTasha Yvette Williams (A Night With Janis Joplin) made a sensational Queenie, leading the haunting “Mis’ry’s Comin’ Round” and a spirited “Queenie’s Ballyhoo,” and Ed Watts (Scandalous) was a rakish Steve Baker. 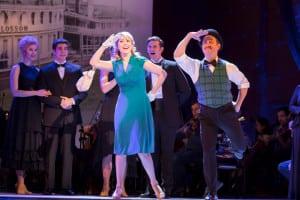 Performers who were miscast include the very talented Norm Lewis (Porgy & Bess) who never should have been asked to play Joe.  Lewis is a dramatic tenor who masquerades as a lyric baritone on Broadway.  (If you need proof he’s a tenor, just listen to the title track from his 2008 CD, This Is The Life!)  Joe, who sings Show Boat‘s most famous song, “Old Man River,” requires a deep, resonant bass voice which Lewis simply doesn’t have.  One can only imagine the number of African-American bass vocalists in New York who would have given anything to play such an iconic role.  Less obviously problematic was the casting of Fred Willard and Jane Alexander as Cap’n Andy Hawks and his wife Parthy, both of whom were distinctly ill-suited for their roles.  The ensemble sang well but there were odd moments when it was difficult to discern the lyrics they were singing, a combination of lazy diction from in combination with erratic sound amplification, which is always a problem in Avery Fisher Hall with these kinds of events.  Other problems included non-existent sets or projections and sloppy costuming for some of the principals, especially the women excepting Vanessa Williams who wore gowns by Carmen Marc Valvo.

It goes without saying that Kern & Hammerstein’s sumptuous score for Show Boat is a masterpiece of the American musical theatre and that it’s always gratifying and edifying to hear it live, especially when played by an orchestra as accomplished as the New York Philharmonic.  But it’s a shame the Philharmonic couldn’t spend a bit more time, attention and money on this staging of Show Boat when the past several musicals have been more lavishly produced. 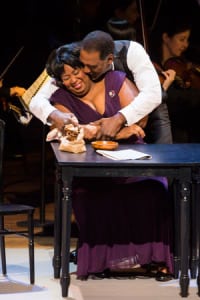