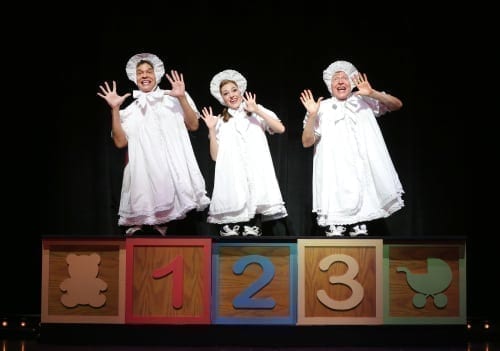 It’s easy to understand why someone thought it was a good idea to turn MGM’s celebrated 1953 musical, The Band Wagon into a stage vehicle.  Starring Fred Astaire, Cyd Charisse, Oscar Levant, Nanette Fabray and Jack Buchanan, the film has a terrific score by Dietz & Schwartz, and a hilarious screenplay by Comden & Green about a washed-up movie star (Astaire) who returns to Broadway hoping for a comeback.  (Well, at least half the screenplay is Comden & Green’s.  Their contract ran out halfway thru the picture so an uncredited Norman Corwin & Alan Jay Lerner completed it…kind of.)  It’s essentially a story about the resiliency of performers, and who doesn’t love that.  It also contains “That’s Entertainment” which was written specifically for the film and is the official anthem of Hollywood the same way that “There’s No Business Like Show Business,” is the official anthem of Broadway. 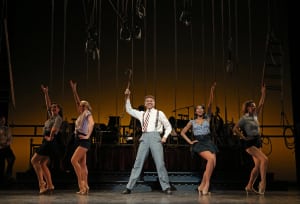 Indeed, for many movie-musical buffs, The Band Wagon is their favorite of all the MGM musicals.  It’s right up there with Singin’ in the Rain (1952) and An American In Paris (1951).  Ironically, …Rain was turned into a Broadway musical in 1985 and …Paris is slated for the Great White Way this spring.  Based on the production of The Band Wagon that just opened at City Center Encores! for a limited run, the question is whether the idea to put the film up on stage was warranted or a mistake.  The answer is a qualified ‘yes,’ but there are caveats with that vote of approval. 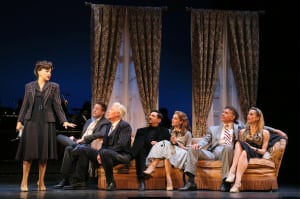 First seen at the La Jolla Playhouse in 2008 where it was called Dancing in the Dark and starred Scott Bakula (and where it got mixed reviews), The Band Wagon seems to have jettisoned all those involved in its California production with the exception of its new book writer, Douglas Carter Beane, who recently gave Rodgers & Hammerstein’s Cinderella a facelift resembling Jocelyn Wildenstein.  Kathleen Marshall has directed and choreographed a top-notch cast at City Center using Beane’s rewritten plot and reordered songs.  For the most part, everyone is terrific and the production looks and sounds good, despite the fact that the always wonderful Encores! Orchestra is greatly reduced in number.  The problem with the audience’s reaction to the show is that the memory of Fred Astaire hangs over The Band Wagon like a weight.  And how could it not?  It was a dance movie-musical and a lot of people are going to expect a dance stage-musical.  But that’s not what Beane and Marshall give us. 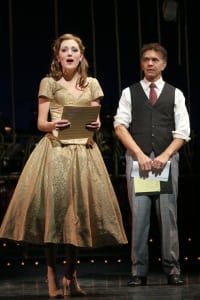 What we get instead is the charming and debonair Brian Stokes Mitchell in the Astaire role of Tony Hunter, the washed up movie star who’s come crawlin’ back to Broadway hoping for a comeback and, just perhaps, someone to love.  Mitchell, one of Broadway’s most talented and dependable leading men, is – as you would expect – wonderful in The Band Wagon.  He sings like a dream and acts up a storm.  But he’s not Fred Astaire – nor should he be expected to be.  It’s our pre-conceived notions about numbers like “By Myself” and “Dancing in the Dark” that subconsciously keep us from giving ourselves over to a newly conceived Tony Hunter.  To be fair, even at age 57, Mitchell is no slouch in the dance department.  He co-starred in David Merrick’s all-black production of Oh, Kay! back in 1990 and took over from Gregory Hines in Jelly’s Last Jam  in 1992.  He’s a mean tapper and proves it in The Band Wagon’s big finale, “A Shine On Your Shoes.”  But the show and Mitchell’s character could use more of Tony dancing and it doesn’t have it. 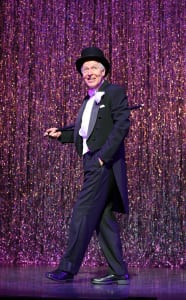 Joining Mitchell in the principal roles are: Tracey Ullman and Michael McKean as the show-within-the-show’s writer’s Lily & Lester Martin who have a love-hate history with Hunter; Tony Sheldon and Don Stephenson as the show’s flamboyant director Jeffrey Cordova who wants to turn the Martin’s musical into a modern-day Faust with himself as The Devil, and his dependable assistant Hal Meadows; Michael Berresse and Laura Osnes as the show’s modern choreographer Paul Byrd and the show’s new ballerina-leading-lady Gabrielle Gerard. 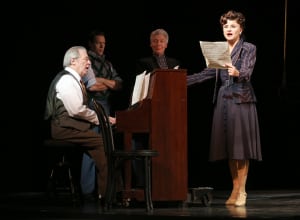 Ullman, making a rare New York stage appearance, is a revelation as Lily, singing with a brassy confidence and nailing every line Beane wrote for her (and then some).  The beautiful Osnes has a heavenly voice and holds her own with Mitchell in an underwritten role.  And then there’s the hilarious Tony Sheldon who practically steals the entire show as director Cordova.  After his Tony-nominated turn in Priscilla, Queen of the Desert I was worried that Sheldon would have trouble finding roles that would showcase his talents, but Cordova fits him like a glove and he struts across the stage with a magnificent bravado that’s delectable. 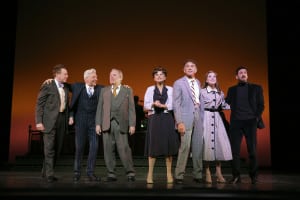 So if everyone’s so good, what’s the problem.  Well, Beane’s clunky book makes for some early plodding during the first 30 minutes of the show.  He’s gone back to Comden & Green’s original draft of the screenplay to incorporate some clumsy subplots involving Lily still carrying a torch for Tony, and her husband Lester falling off the wagon worrying whether he’s going to lose his wife to his show’s star.  Of course, Ullman and McKean are such pro’s that they put the material over, but it doesn’t make the new additions any more convincing.  Or necessary.  Somewhat unbelievably, The Band Wagon‘s second act is stronger than its first – and when was the last time anyone said that about a musical-comedy?!  It breezes along with a pacing a sense of purpose sorely lacking from the first act.

Still, despite its problems, The Band Wagon is consistently entertaining and it’s a delight to see so many wonderful performers doing the utmost to give us some of that old-fashioned, razzle-dazzle.  For those of you out there who love musicals, I wouldn’t delay in getting to City Center to see this incarnation of the show.  The lukewarm response from the New York critics (especially The New York Times) makes a transfer to Broadway highly unlikely – at least in its present form.  But perhaps we shouldn’t count The Band Wagon out just yet.  After all, it’s a show about a Broadway-bound musical that fixes itself and becomes a hit.  Perhaps life can imitate art after all. 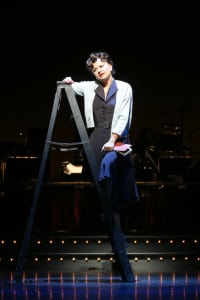