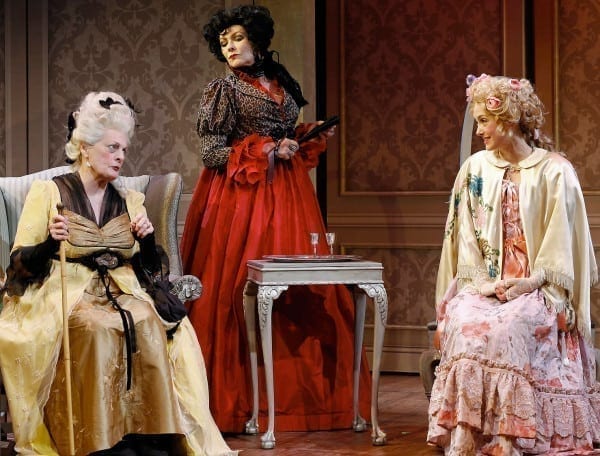 Run, don’t walk, down to the Lucille Lortel to see the Red Bull’s new revival of Sheridan’s classic comedy of (bad) manners, “The School for Scandal.”  With savvy direction, a star-studded cast, and lavish production values, this “Scandal” is a welcome treat for lovers of restoration comedy done very, very well, indeed!

Directed with pitch-perfect tone and style, Marc Vietor gets out of the way and lets his talented cast shine brightly in their delicious roles.  There’s the divine Frances Barber, prowling the stage as Lady Sneerwell, Jacob Dresch literally slithering around stage as the columnist Mr. Snake, and the inimitable Dana Ivey gleefully unleashed as Mrs. Candor.  Joining them are Derek Smith as a Ryan Garbayo as a malevolent Sir Benjamin Backbite and Derek Smith as his equally evil uncle, Mr. Crabtree.   Mark Linn-Baker shows up as a hilarious Sir Peter Teazle, accompanied by his too young wife, Lady Teazle, played by a flirtatious Helen Cespedes.  Which leaves us with the Surface brothers: Joseph, the older brother, played by Christian Conn, and Charles, the younger extravagant prodigal played by Christian Demarais and their long-absent uncle recently retuned from the Far East, Sir Oliver Surface, essayed by the wonderful Henry Stram.   And everyone wearing stunning costumes designed by Andrea Lauer and glorious wigs designed by Charles G. LaPointe.  What’s not to love.

No one understood ‘art’ and ‘artifice’ as Sheridan did and the climatic scene of “The School for Scandal” remains a heel-clicking theatrical treat hundreds of years after its premiere.  As revelations and unmasking occur, it’s like Christmas morning for the audience.  Don’t dream of missing it!