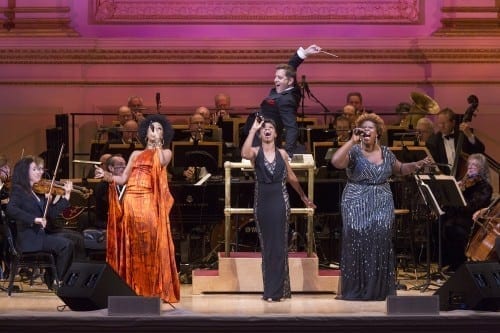 With their knockout evening of “Sophisticated Ladies” on November 13th, Steven Reineke and The New York Pops are ‘two for two’ in their 33rd season at Carnegie Hall.  After a rapturous October evening of classic Rodgers & Hammerstein, in November The Pops set their sights on the swinging jazz stylings of famous African-American songstresses, particularly Billie Holiday in this, her centennial year.  Wisely, Reineke recruited Broadway showstoppers Montego Glover and Capathia Jenkins, as well as jazz chanteuse Sy Smith, to put fresh spins on an evening of standards that would prove daunting assignments for lesser singers.  Lucky for The Pops and their audience, Glover, Jenkins and Smith seized their moment and delivered the vocal goods with style, verve and more than a smattering of glamorous gowns.

Glover, a Tony-nominee for Memphis currently starring as Fantine in Les Miserables, used her brassy, belt to sassy effect in “Come Rain or Come Shine” and “The Best Is Yet to Come” among others.  Smith, a Los Angeles-based recording artist previously unknown to me who works frequently with trumpeter Chris Botti, showed her soulful style on songs as diverse as “They Can’t Take That Aware from Me,” “Fascinatin’ Rhythm” and a stripped down “One for My Baby (and One More for the Road)” that had the audience on their feet cheering for her.  Smith can easily be compared to a young Diana Ross, both for her light, beautiful tonal quality as well as her chic fashion sense.  However, it must be pointed out that Smith has a better voice than Ross ever dreamed of having (hard as that may be for diehard Ross fans to believe).

For this writer, the discovery of the show turned out to be the vocally stunning Capathia Jenkins.  As luscious as she is talented, Jenkins put her indelible stylings on a pair of Gershwin songs (“Strike Up the Band” and “Clap Yo’ Hands”) before bringing down the house with Johnny Mercer’s “Something’s Gotta Give” and a spine-tingling reading of “Summertime.”  In listening to Jenkins essay such disparate material, it became clear the audience was only hearing the tip of the iceberg in terms of her range and talent.  She would begin to open up in her top belt and it was clear she had another half octave in reserve – just in case she wanted to use it.

Thankfully, the finale of “Sophisticated Ladies” brought all three divas together for an inspired “Blues in the Night,” arranged and orchestrated by Matt Podd.  Instead of competing with each other, these three superb performers joined their voices together to create a musical moment that was as heart-stopping as it was artistically satisfying.  Don’t miss The Pops’ holiday celebration: “It’s Christmas Time in the City” on December 18-19, starring Broadway favorites Stephanie J. Block and Brian d’Arcy James.