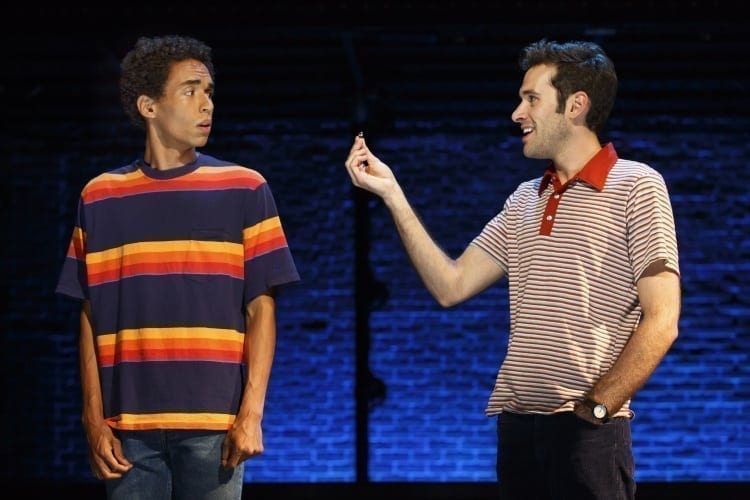 The Fortress of Solitude ★★★☆☆

The problem with turning a successful book into a stage musical is you’re going to make a lot of people unhappy – especially the people who loved the book.  Or those who loved the book but complained about its shortcomings and stylistic choices in the second half because they loved the first half.  Or those who loved the book because of the author’s specific ‘voice’ in evoking a time and a place they felt they knew, too.  Such is bound to be the case with The Fortress of Solitude (the title is the name of Superman’s sanctuary if you have to ask), a new musical at The Public based on Jonathan Lethem’s 2003, autobiographical, coming-of-age story about two adolescent boys – Dylan is white and Mingus is black – growing up motherless in the Gowanus section of Brooklyn in the mid-70’s.  Both Dylan and Mingus heal their loneliness and preserve their sanity thru comic books, music and their love for each other, which takes multiple forms as Lethem’s novel traces their stories as they grow to adulthood with excruciatingly different outcomes.  It’s a sprawling tale of friendship, race, loyalty, graffiti tags, gentrification, familial dysfunction, drug addiction and the power of imagination and superheroes  to transport the mind out of situations to emotionally painful to endure.  The first part of the boys story will make your spirit soar, but their descent into incarceration (both physical and psychological) in the second half will shatter your faith in humanity.

Director Daniel Aukin, who conceived the idea of turning The Fortress of Solitude into a musical, enlisted Itamar Moses (The Four of Us, Back Back Back) to write the book and composer Michael Friedman (The Civilians, Bloody Bloody Andrew Jackson, Love’s Labour’s Lost) to pen the music and lyrics.  The show was first workshopped by Vassar & New York Stage and Film in the summer of 2012, before receiving its world premiere at the Dallas Theater Center earlier this year, the latter production with the same primary principal actors.  To the creator’s credit, they manage to get some of Lethem’s story right, resulting in a frequently moving relationship between Solitude‘s protagonists, the importance of Dylan’s mother’s wedding ring (which she left when she abandoned her family) and a musical score which references the R&B soul music of the 60’s and 70’s with fluid style.  But the creator’s also get much of Lethem’s story wrong, resulting in fuzzy story telling that glosses over Dylan & Mingus’ homoerotic subtext in the first act and Dylan’s descent into mean, shallowness in the second act (among other things).  The musical’s ending, where Dylan visits Mingus in prison, is especially messy (particularly for Robert Woolfolk, a key supporting character), though a manipulative, musical reprise ensures the audience tears up on cue despite a less-than-upbeat ending.

Aukin’s work in the past, including Amy Herzog’s gorgeous 4000 Miles and Sam Shepard’s unwatchable Heartless, has been more hit than miss, and he keeps things moving fluidly  in Solitude.  The music is a key plot device, especially for Mingus’ father, Barrett Rude, Jr., who was a rising lead singer for the group The Subtle Distinctions before cocaine and changing tastes derailed his career.  Aukin’s staging of The Subtle Distinctions’ numbers bears a subtle resemblance to the late Michael Bennett’s work in the original production of Dreamgirls, but those moments are too fleeting.  Additionally, the choreography executed by the trio of men who make up the Distinctions is simply not “tight” enough to be convincing, and while the actor who plays Barrett Rude, Jr., Kevin Mambo, is a solid performer, he doesn’t have a great enough voice to be considered a singer just under the ranks of A-listers Sam Cooke and Marvin Gaye.

For the most part the talented cast, led by Adam Chanler-Berat and Kyle Beltran as Dylan and Mingus, is on top of their game with an especially feisty performance from Broadway legend Andre De Shields as Barrett Rude, Sr., a bible-thumping ex-con whose presence wrecks havoc with Mingus and his father’s fragile existence.  Good, too, are Ken Barnett as Dylan’s artist father singing “Painting,” perhaps the strongest song in the score, and Rebecca Naomi Jones as Dylan’s girlfriend in California singing “Something,” a song in which she’s trying to figure out her mysteriously reticent boyfriend.  David Rossmer and Alison Whitehurst almost make strong impressions as Arthur Lomb, a one-time nerd who ends up in drugs and real estate, and Liza, who went to Stuyvesant with Dylan but ends up a waitress in the newly gentrified Boerum Hill.  The pivotal leads Chanler-Berat and Beltran are fine (and still barely able to pass as the teens they both frequently portray) but it’s also necessary to point out Chanler-Berat gives the same performance in every show in which he’s cast.  It doesn’t matter whether it’s Next to Normal or Peter and the Starcatcher or Rent or The Fortress of Solitude, it’s the same performance with the same inflections and the same mannerisms.  He’s talented and easy to watch, but it would be nice to actually see him do something different for a change.

As for The Fortress of Solitude as a whole, it’s a frustrating might-have-been.  When it’s working and clicking, it’s filled with the kind of excitement and energy we’ve come to expect from shows at The Public, such as Fun Home, the dazzling new musical by Jeanine Tesori and Lisa Kron based on Alison Bechdel’s 2006, graphic novel that just played in The Newman and is moving to Broadway.  But when it’s floundering, it’s impossible to sit in the audience and wonder what another team of writers might have done with such great source material.