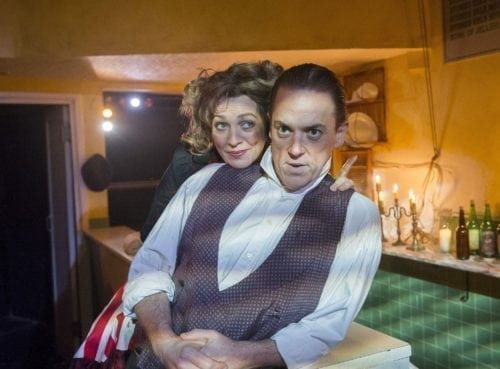 Any new production of Stephen Sondheim and Hugh Wheeler’s masterpiece, Sweeney Todd: The Demon Barber of Fleet Street, is cause for celebration, but the reports from the 2014 Tooting Arts Club’s production in London, staged inside Harrington’s Pie and Mash Shop – the city’s oldest continuously operating pie shop – sounded simply too delicious for the show not to transfer to New York.  And now it has, to the Barrow Street Theatre in Greenwich Village.  At Harrington’s, an intimate audience of 35 people watched Sweeney slit throats as they nibbled their pies, but at Barrow Street a more robust audience of 130 will get to enjoy the carnage and, yes, they’ll get to eat pies, too.  And for the record, the pies (either chicken or vegan) by former White House Executive Pastry Chef William ‘Bill’ Yosses (dubbed ‘The Crust Master’ by President Obama) are scrumptious!

But you’re probably asking yourself, “how’s the show?”  How can anyone do Sweeney with a cast of 8 and an orchestra of 3?  The answers are: “it’s incredible,” and “with imagination, that’s how!”  Reprising their roles from London, New York audiences will get to enjoy Jeremy Secomb and Siobhán McCarthy as Sweeney Todd and Mrs. Lovett thru April 9th and, starting on April 11th, Broadway veterans Norm Lewis and Carolee Carmello will assume the roles.  The other roles changing hands on April 11th will be the Beggar Woman/Adolfo Pirelli (Stacie Bono will replace Betsy Morgan), Judge Turpin (Jamie Jackson will replace Duncan Smith) and Tobias (John-Michael Lyles will replace Joseph Taylor).  Performing with both companies are Matt Doyle as Anthony, Alex Finke as Johanna and Brad Oscar as The Beadle.

Dispensing with a synopsis of the plot (if you’re reading this you already know it), the first thing you’ll notice as you enter the Barrow Street Theatre (formerly Greenwich House) is the interior has been completely reconfigured to approximate the Harrington Pie shop in London.  To say it’s unrecognizable would be an understatement.  Audience sit at communal benches and the cast performs around, about and often on top of you as the show progresses.  It’s up-close and personal, creating a thrilling atmosphere to see a show as brutal and immediate as Sweeney Todd.  As for Sondheim’s brilliant score, you might think it would have its impact lessened by being orchestrated for piano (Matt Aument), violin (Tomoko Akaboshi) and clarinet (Michael Favreau) but – amazingly – it has a new clarity and immediacy, distilled as it is down to its basic elements.  Of course, purists will miss the strings and Jonathan Tunick’s irreplaceable orchestrations.  But I would urge you to give this spare, stripped down orchestration by Benjamin Cox a chance; I suspect it will win you over as it did me.

For its part, the cast is superb.  Secomb brings a malevolent, psychotic underpinning to his Sweeney that’s as harrowing as it is exciting.  True, some of the low A’s and B-flat’s in “No Place Like London” are too low for him to project properly, but Secomb glosses over them stylishly till he’s back in his vocal comfort zone.  Balancing him nicely is the effervescence of McCarthy’s Mrs. Lovett.  She’s got nerves of steel but her love for her barber is never far from the surface.  She doesn’t have the vocal power of Patti LuPone, but she handles Lovett’s songs with humorous panache.  As Anthony, Doyle is the whole package and perhaps the best sung and acted Anthony I’ve ever seen after more than a dozen productions of this show.  His performance of “Johanna” in such tight quarters is simply spine-tingling.  For her part, Finke’s Johanna is also sublime.  It’s beautifully sung, particularly the tricky harmonics in “Green Finch and Linnet Bird” and the fast passages in “Kiss Me (Part II)” when it turns into a quartet with the Beadle and the Judge.  (For the record, the best Johanna I’ve ever seen remains Celia Kennan-Bolger in The Kennedy Center’s Sondheim Festival production.)   Oscar is wonderful as the Beadle (even if he doesn’t have Jack Eric Williams’ high B’s), Smith is appropriately scary as the Judge and Taylor is heartbreaking as Tobias.

Special praise is reserved for the vocal pyrotechnics of Betsy Morgan who not only brilliantly sings the dual roles of the Beggar Woman and Pirelli, but also is assigned all the crazy high notes in the ensemble’s transitional music.  She tosses of high C-sharp’s and high D’s (!!!) effortlessly.  It’s insane what she’s singing.  The original production had 18 people in the ensemble and here’s it’s barely 3 people.  Bill Buckhurst’s staging feels organic and unforced even though the performers and audience are sharing an incredibly tight space.  He cleverly has the cast often walking on top of the narrow tables to maximize their playing area.  The only drawback to this concept and design is it’s impossible to have a functioning barber’s chair with a chute for the victims.  There’s a staircase, upstage center, utilized for this purpose and, although it works in theory, it’s not an optimal solution.  But you can’t have everything with a concept as bold as this one and the environmental thrills and immediacy of the performances more than compensates for any minor deficits brought about due to the performing space.  But be warned, with a psychopath literally singing in your face this Sweeney Todd isn’t for the faint of heart!