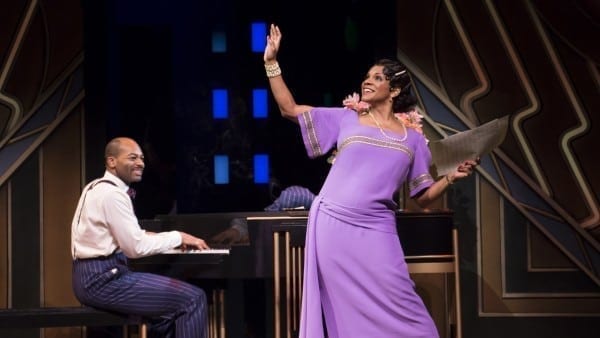 The talents involved with “Shuffle Along or The Making of the Musical Sensation of 1921 and All That Followed” are mind-boggling.  A reading of the cast list alone, including names like Audra McDonald, Brian Stokes Mitchell, Billy Porter, Brandon Victor Dixon, Joshua Henry, Adrienne Warren, Amber Iman and Brooks Ashmanskas, not to mention a creative team boasting George C. Wolfe, Savion Glover and Daryl Waters, is so astonishing it sounds like a ‘dream cast’ of wishful thinking and not an actual Broadway production.  But an actual production it is, and for much of the first act it’s as thrilling and promising as you would think it would be based on the players involved and the subject matter being produced.  But then the second act begins and the realization sets in that “Shuffle Along” doesn’t have an ending.  It doesn’t know where to go or how to get there.  It’s a stunning jolt to the system and one for which there doesn’t seem to be any reasonable explanation.

The original 1921 “Shuffle Along” was a smash hit and the first Broadway production written, produced, directed and starring African-Americans.  It had a tuneful score by Noble Sissle & Eubie Blake, contained one big hit song, “I’m Just Wild About Harry,” and had a book which is completely unusable today in 2016.  Knowing this, Wolfe wisely decided to tell the story of the making of “Shuffle Along” and while the musical is on its way to Broadway the show is terrific.  But at the top of Act 2, once “Shuffle Along” has opened and is running, the relationships between its creators fall part and there’s no where to go dramatically.  In short, there simply isn’t enough that happens to the creators and stars of the original show that’s interesting enough to sustain the second act of a contemporary Broadway musical.

With all that said, however, there’s still so much talent on-stage in this 2016 retelling that, even with its structural problems, there’s a wealth of entertainment to be had.  Lavishly produced with sumptuous sets and costumes, and possessing sensational choreography by Savion Glover, “Shuffle Along” is a fascinating anomaly that seems doomed to fail.  Perhaps Wolfe and his collaborators should have taken it out of town or waited another season to open in New York.  But then again, when could producers ever hope to assemble one of the greatest casts ever brought together in the history of the American musical theatre?