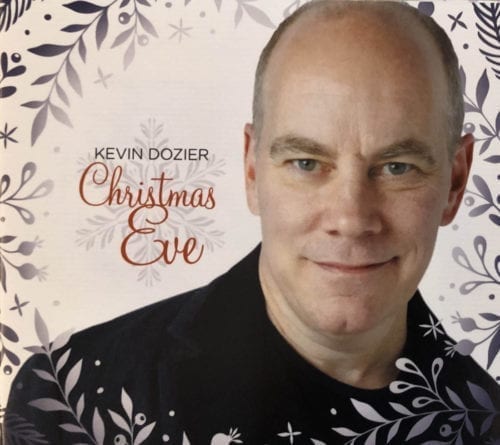 Now that the Thanksgiving leftovers are a memory and the Christmas insanity has begun, the top item on everyone’s shopping list should be Kevin Dozier’s ravishing new holiday disc, Christmas Eve.  Expertly recorded by Grammy-nominee Paul Rolnick, with beautiful arrangements courtesy of musical wunderkind Alex Rybeck, Dozier is in top form on this winning collection of holiday songs.  Christmas Eve is the perfect stocking-stuffer, but why wait for the 25th when it’s a disc you could be playing all month long.

The release of Christmas Eve, Dozier’s fourth studio album (following Love-Wise (2009), Love’s Never Lost (2013) and A New York Romance (2016)), celebrates a 10-year recording career and a ubiquitous presence in the New York cabaret community.  Possessing one of the loveliest voices on the scene, Dozier’s vibrant tenor has a warm caramel center that never sounds forced.  His bright, ringing tone is ideal for this holiday repertoire and he’s careful never to overstate the melodic line or to stray into unnecessary vocal melismas.  On the contrary, his simple approach to the material enhances its message and keeps the attention squarely where it belongs – on the lyric!

Christmas Eve has a generous helping of both traditional and contemporary holiday songs and Dozier sings them all with great warmth and feeling.  But as beautifully as he sings “I Heard the Bells on Christmas Day,” “Sleep Well, Little Children” and “The Christmas Song,” you may be drawn to some of the lesser known gems on his disc that aren’t as well known or performed.  Take the title track for instance, “Christmas Eve,” written by Dozier’s musical director Alex Rybeck (music) and the late, great Carol Hall (lyrics).  A heart-tugging reflection on Christmas from a child’s perspective, Hall’s poignant lyric “…if I’m ever lonely, I believe there’s an open door where I can still remember – could not ask for more,” resonates deeply in Dozier’s heartfelt delivery.  The song also contains what may be one of the most beautiful bridges ever written, and Rybeck’s understated, elegant instrumentation for it is perfection.  Another unexpected delight is “Home on Christmas Day” (music & lyrics by Walter Afanasieff & Jay Landers) which deserves to be a standard based on Dozier’s stirring and touching interpretation.  And it’s refreshing to hear a man sing “Grown Up Christmas List” (music & lyrics by David Foster & Linda Thompson) after so many famous divas (e.g, Amy Grant, Kelly Clarkson and Barbra Streisand, etc.) have put their stamp on it.

Perhaps the most interesting track on Christmas Eve is a medley of “I’ll Be Home for Christmas” (Walter Kent & Kim Gannon), a World War II ballad made famous by Bing Crosby, and the haunting “Goodbye for Now,” which, of course, was written by Stephen Sondheim for Warren Beatty’s 1981 film about communists, Reds.  Since their sentiments seem diametrically opposed (depending on your interpretation), the pairing shouldn’t work, but it does.  Rybeck’s arrangement cleverly melds the two melodies and Dozier’s performance finds the ache and longing in both lyrics.  It’s a union of two songs which is as obvious as it is subversive, and just the kind of bold choice we’ve come to expect from these two artists – both at the top of their game.

Upcoming holiday shows with Dozier include: