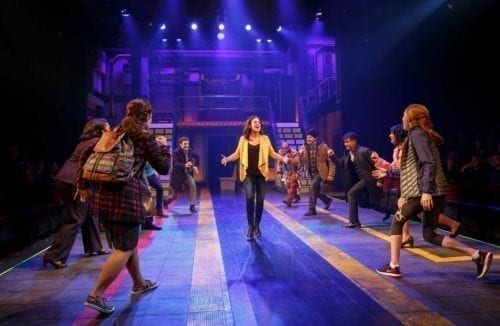 Having a brief, off-Broadway run at 59E59 Theaters in 2010 wasn’t enough for In Transit so now it’s opened on Broadway at Circle in the Square in a jaw-dropping debacle that redefines ‘vanity production.’  What was merely a cloying, irritating show six years ago is now an epic misfire as ridiculous as it is stupefying.  Did the world need an a cappella musical?  Perhaps so but, if it did, In Transit isn’t it.

With most of the action set on New York City subway platforms or inside subway cars, the Tony-wining director and choreographer Kathleen Marshall has her work cut out for her as she tries to make sense of a book whose cliches are laughable.  Jane (Margo Seibert) is an actress temping in an office while her potential soulmate Nate (James Snyder) has just lost his job on Wall Street but who still has time to pick up valuable life lessons from a sarcastic subway attendant (Moya Angela).  The obligatory gay couple, Trent (Justin Guarini) and Steven (Telly Leung) can’t get married because Trent isn’t out to his bible-thumping mother (Angela, again).  Meanwhile, Dave (David Abeles) has dumped poor Ali (Erin Mackey) who mends her heart with running marathons.  Their stories and heartache are all told thru soaring ballads and rollicking up-tempos, most with gratingly over-amplified vocals.

To be sure, the cast is game.  Seibert, so wonderful in Rocky, has a lovely voice and it’s always nice to see the under-utilized Snyder.  But Angela – who keeps her head above the rising water due to sheer talent – comes off best and gets the best song, “Keep It Goin’,” and the best outfit – a dress constructed of Metrocards, even if it’s suspiciously similar to the AmEx card dress worn by The Adventures of Priscilla, Queen of the Desert costume designer Lizzie Gardiner in 1995 when she won her Oscar.  But everything in In Transit is a sugar-cube away from a cavity in a world where the subway platforms are devoid of commuters and the cars are always empty.  Be warned: take the bus instead.