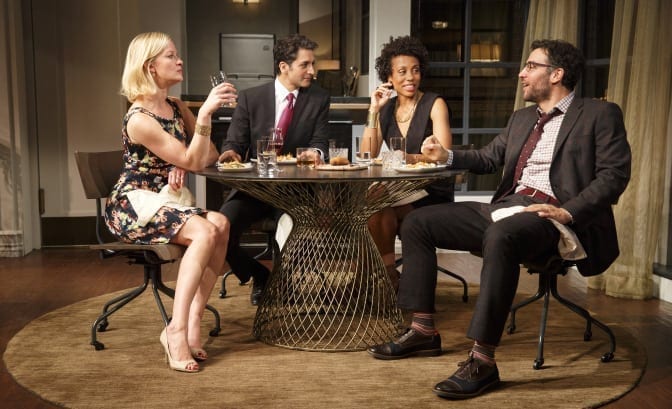 After critically acclaimed productions at Chicago’s American Theatre Company and New York’s Lincoln Center in the spring and fall of 2012, both directed by Kimberly Senior, playwright Ayad Akhtar’s Disgraced won the Pulitzer Prize for Drama in April, 2013, over Amy Herzog’s 4000 Miles and Gina Gionfriddo’s Rapture, Blister, Burn.  A gut-wrenching examination of religious identity, cultural assimilation, racial prejudice, liberal guilt, and political naiveté, Disgraced has finally opened on Broadway in a sleek, taught production directed once again by Senior.  Notable for being a well-crafted play that actually has something to say, Disgraced is filled with provocative dialogue in which people wound each another with words.  It’s a play filled with ideas and outcomes told from a refreshingly new point of view for American audiences. 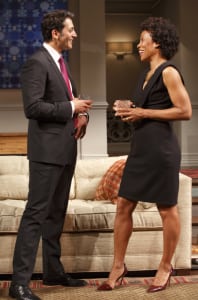 In Disgraced, Amir Kapoor (Hari Dhillon) is an ambitious, corporate lawyer working for a Jewish, mergers and acquisitions firm he hopes will one day make him a partner.  His wife, Emily (Gretchen Mol), is an up-and-coming artist who has been incorporating Islamic art forms in her work, reflecting her growing fascination with Islam in general.  Both Emily and Amir’s nephew, Abe Jensen (Danny Ashok), who’s changed his name from Hussein Malik, want Amir to attend a hearing for a local imam who’s been accused of terrorist activities but Amir resists.  In his resistance it’s revealed that Amir’s real last name is Abdullah and not Kapoor; he has concealed his Muslim origins and Pakistani heritage by pretending to be Hindu and from India instead.  When Amir finally relents and attends the imam’s hearing it backfires on him when he and his firm are mentioned in The New York Times.  The senior partners at Amir’s firm start asking him questions which set him on edge.  The situation reaches a boiling point at a dinner-party Amir and Emily have for Isaac (Josh Radnor), a Jewish art-curator who may be inviting Emily to be in his next show, and his wife, Jory (Karen Pittman), an African-American attorney who works at the same firm as Amir.  During the course of the evening, accusations are made and secrets revealed, forever changing the couple’s lives in irreparable ways. 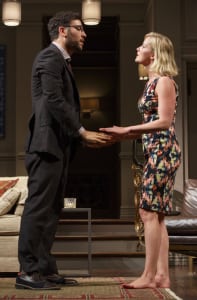 Putting aside the contrivances in evidence from that synopsis alone (e.g., the convenient inclusion of Pakistani, Caucasian, Jewish & African-American ethnicities; the curator deciding whether or not to include Emily’s art in his show just happens to be married to a lawyer from Amir’s firm, etc.), Akhtar’s writing is shrewd and compelling.  And though the tempo felt strangely off-kilter for the first ten to fifteen minutes the night I saw Disgraced, Senior’s direction is naturalistic, allowing the tension to rise methodically as the evening spirals out of control.  That initial, off-kilter feeling  is probably attributed to seeing Hari Dhillon in the role of Amir as opposed to Aasif Mandvi (The Daily Show with Jon Stewart, Oklahoma and an Obie-winner for his 1998 solo show, Sakina’s Restaurant) who inhabited the role so brilliantly in the Lincoln Center’s LCT3 production.  They are vastly different interpretations and, while I prefer Mandvi’s characterization, Dhillon’s performance grew on me steadily even if he lacks Mandvi’s take-charge charisma and self-confidence. 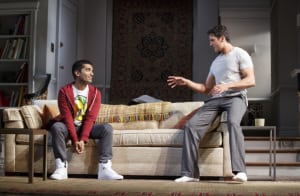 Dhillon had appeared as Amir in the London production of Disgraced at the Bush Theatre in May/June of 2013 when it was directed by Nadia Fall, as had the excellent Danny Ashok in the role of Amir’s nephew, Abe.  The only holdover from the LCT3 production to the current Broadway incarnation is Karen Pittman, who is superb in the tricky role of Jory.  Pittman’s cool, understated demeanor belies a lioness stalking her prey just below the surface.  She modulates ‘defensiveness’  with ‘anger’ beautifully, as does Josh Radnor (CBS’s How I Met Your Mother) in the role of her husband, Isaac.  Also welcome in the role of Emily is Gretchen Mol, who is fresh off her dazzling turn as Gillian Darmody in Boardwalk Empire.  Mol is a luminous presence on-stage and she ‘listens’ as intently as she engages.  She is especially good in the play’s final scene which calls for Emily to have steady nerves and a resolve of steel. 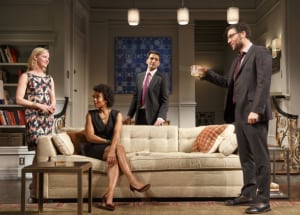 The physical production – another sleek Upper East Side apartment where no one locks the door – is gorgeous and courtesy of another superb set by John Lee Beatty, along with the perfect lighting of Kenneth Posner and the polished costumes of Jennifer Von Mayrhauser.  I suspect Akhtar never imagined he was writing a play about ‘real estate porn’ in addition to a lacerating drama about personal identity and the cost of living a lie.  As my friend said as we left the theatre, “…I’m glad I don’t know any of those people, but, boy, do I want that apartment!”  In Akhtar’s Disgraced be careful what you wish for.