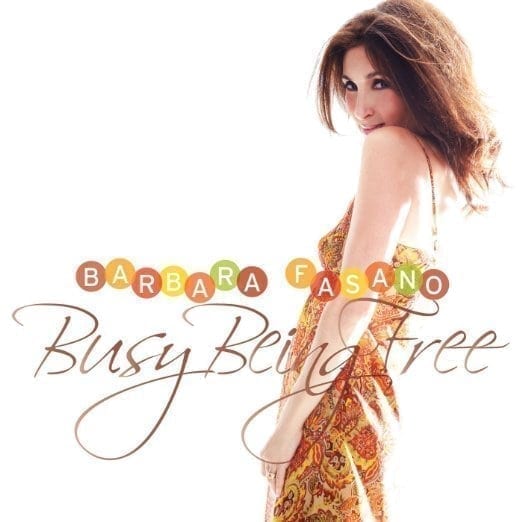 It’s rewarding to follow singers as they grow and mature, and no artist exemplifies this more than the alluring Barbara Fasano.  On the scene for more than twenty years, it’s been almost ten years since Fasano released her last recording, Written in the Stars (2006), a lush and insightful cache of Harold Arlen songs.  So it’s a major event she’s returned to the recording studio and the results, Busy Being Free (2015), are an eclectic grab-bag of musical delights as interesting to ponder as they are ravishing to hear!

Released last year before the holidays, Fasano’s selections on Busy Being Free run a seemingly disparate gamut of writers from Carolyn Leigh (“How Little We Know” with Philip Springer) and Dorothy Fields (“Remind Me” with Jerome Kern), to Joni Mitchell (“Cactus Tree”) and Nellie Lutcher (“Hurry On Down”).  She’s also honors her roots in musical theatre by including standards from Richard Rodgers, with both Oscar Hammerstein II (“If I Loved You” & “The Surrey With the Fringe On Top”) and Lorenz Hart (“Where or When”), Kurt Weill (“It Never Was You” with Maxwell Anderson) and Irving Berlin (“I Got Lost in His Arms”).  Yet in its execution, Fasano’s insightful interpretations and effortless singing pull her collection together with wit, humor and a wry streak of longing.  Her performance of Joni Mitchell’s “Cactus Tree” is especially effective and made me think of all the other Joni Mitchell songs I’d love to hear Fasano sing.  She could easily devote an entire album/disc to Mitchell’s rich catalogue of material. (Hint, hint!)

If I were forced to pick a favorite track on Busy Being Free, I’d have to insist on at least three: Vernon Duke & Ogden Nash’s haunting “Roundabout” is a study in pensive deliberation in Fasano’s capable hands; the great Jimmy Webb’s “Time Flies” will open a door into your past, and Alec Wilder & Fran Landesman’s obscure “Photographs” (a song with which I was not familiar) will surprise you on every imaginable level.  Throughout Busy Being Free you become aware Fasano is as savvy as she is sophisticated.  This is a singer who has something to say.  This is a singer who is determined to remain fiercely herself.  And this is a singer who has perfected being intoxicatingly sublime.