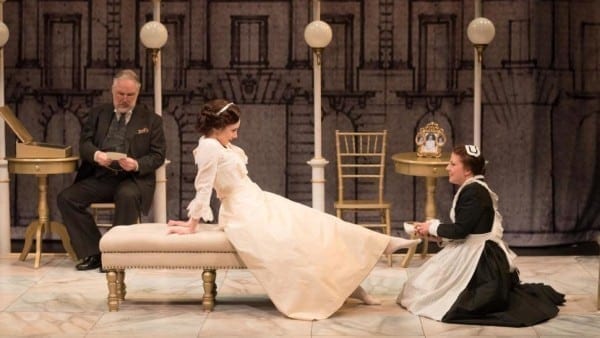 TACT and the Gingold Theatrical Group have combined forces to bring us a stylishly streamlined revival of George Bernard Shaw’s “Widowers’ Houses,” currently at the Beckett.  GTG Artistic Director, David Staller, helms this production of Shaw’s debut play with skill and an eye for detail.  The play, as is typical of Shaw’s trenchant and intuitive writing, remains as timeless today as when it premiered in 1892.  A story of a young man’s reaction to the discovery of an unsavory truth concerning his future in-laws business dealings forces him into a moral dilemma that pits love against idealism.  What what wins out?  Ah, well that’s where Shaw comes in, doesn’t it?

Jeremy Beck plays Dr. Harry Trench, the young man in question, with flair and the requisite naivety that slowly becomes realization, while Jonathan Hadley plays his friend, William DeBurgh Cokane, whose bet to Trench sets the drama in motion.  Trench’s soon-to-be fiancee is portrayed by Talene Monahon with stylish Edwardian élan, even if her delivery is occasionally too contemporary for the period.  Her stern, businessman father is assumed by Terry Layman who delivers some of Shaw’s most withering and painful truths to both Trench and the audience.  The vivacious Hannah Cheek plays a variety of supporting roles with crisp efficiency, and John Plumpis has the envious task of playing a character known as Lickcheese, whose societal and financial turn of fortune is the mirror for the entire drama.