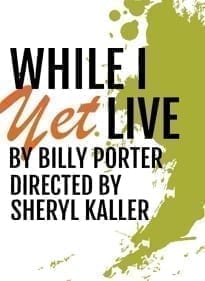 Though it needs some shaping and trimming, While I Yet Live, Billy Porter’s debut playwriting effort about growing up black and gay in Pittsburgh, is an auspicious piece of work receiving a first-rate production at Primary Stages.  Cast with a quintet of superb actresses – each with a plumb role – Porter’s play is an autobiographical homage to the women who raised him and the lives they sacrificed along the way.  Directed with sharp acuity by Sheryl Kaller (last season’s Mother and Sons and Tony-nominated for Next Fall), the first act of While I Yet Live tells the story of Calvin, Porter’s stand-in, played with assuredness by Larry Powell in a winning performance, who must leave his dysfunctional home as an act of emotional self-preservation.  Its second act charts the psychological transformation of Calvin’s mother, who must learn to overcome her fundamentalist judgment and entrenched homophobia as her physical condition deteriorates dramatically. 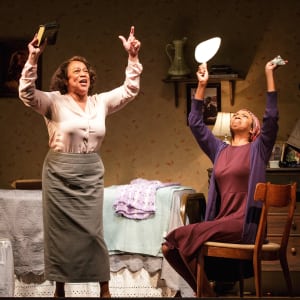 S. Epatha Merkerson & Sharon Washington in “While I Yet Live” at Primary Stages (photo: James Leynse) 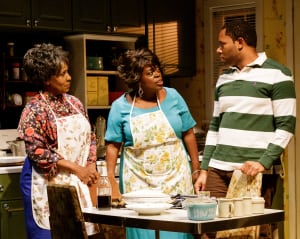 The women in Calvin’s life are: his mother, Maxine, heartbreakingly portrayed by S. Epatha Merkerson in a shattering portrayal; Maxine’s overbearing sister Delores who’s born her sister a life-long grudge, magnificently rendered by Elain Graham; their mother, Gertrude, played with no-nonsense sass by Tony-winner Lillias White; Maxine’s best friend, Eva, who’s ill with cancer and loathe to confess her secrets to Maxine for fear of being judged, a terrific Sharon Wasington; and Maxine’s daughter and Calvin’s sister, Tonya, sensationally played by Sheria Irving. 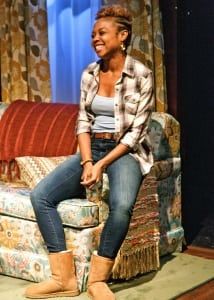 Sheria Irving in “While I Yet Live” at Primary Stages (photo: James Leynse)

The only other man in the play is Maxine’s husband, Tonya’s father and Calvin’s stepfather, Vernon, who it’s revealed early on has been sexually abusing Calvin for years – and that Maxine has known about the abuse for at least the last two years when the play begins.  Vernon is sensitively portrayed by Kevyn Morrow in a performance as fearsome as it is surprisingly sympathetic. 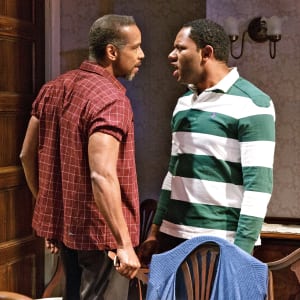 Kevyn Morrow & Larry Powell in “While I Yet Live” at Primary Stages (photo: James Leynse)

When it’s firing on all cylinders, which is most of the time, the rapid-fire exchange of familial dialogue rings with authenticity.  In their interactions together, Porter perfectly captures the give and take that’s part and parcel to growing up in a family filled with bigger-than-life personalities.  This is especially true of scenes in the second act which deal with Tonya’s resentment of Calvin for escaping to New York and leaving her to care for their invalid aunt.  Some scenes need to be tightened, the use of characters as ghosts refined and some of the preachiness in Maxine’s eleven o’clock revelations need to be lessened.  Overall, however, Porter’s written a thoughtful and moving portrait of one family’s struggle with lies, deceit, and betrayal that we haven’t seen before – at least not in the context of an African-American family dealing with the coming out of a gay son.