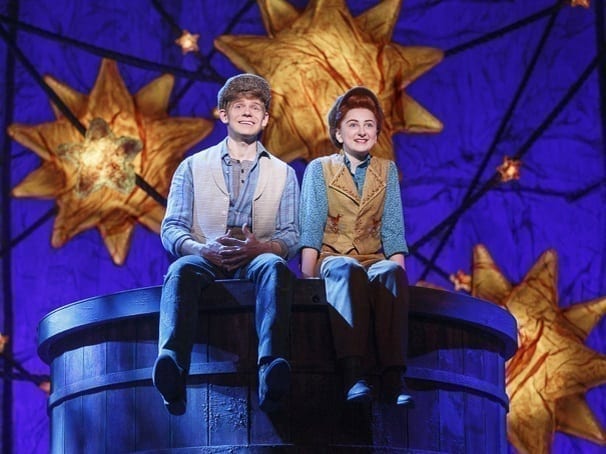 It’s always dispiriting to see a new musical that simply doesn’t work, especially when that musical boasts a terrific cast and has been given a lavish production, including a startling and sumptuous ballet which closes the musical in grand and moving fashion.  But such is the case with “Tuck Everlasting” with a score by Chris Miller and Nathan Tyson (“The Burnt Part Boys”) and a book by Claudia Shear (“Dirty Blonde”) and Tim Federle based on a popular children’s novel of the same name by Natalie Babbitt.  All the individual pieces are there, but the show lacks both a compelling book and and a memorable score.

Directed with a gentle hand by Casey Nicholaw (who also directed “Something Rotten,” “Aladdin” and “The Book of Mormon,” all currently running), “Tuck Everlasting” tells the story of a young girl, Winnie Foster, superbly played by newcomer Sarah Charles Lewis, who happens on the Tuck family who have drunk the water from a ‘fountain of youth’ and are destined to live forever.  Winnie agrees to keep the family’s secrets and must decide whether to drink the water when she’s old enough to marry Jesse Tuck (winningly played by Andrew Keenan-Bolger) or to refuse the water and lead a normal life.

A subplot involving a ‘Man in the Yellow Suit,’ played by an over-the-top Terrence Mann, who knows about the existence of the Tuck family and wants the fountain of youth for himself is insufferable and must shoulder some of the blame for the show’s failure.  The majority of the problem, however, is Miller and Tyson’s score which, while tuneful, simply isn’t memorable.  There are two pretty good songs in the show: “Time” sung by Jesse’s older brother Miles (a wonderful Robert Lenzi) and Jesse’s parents, Mae and Angus (the terrific Carolee Carmello and Michael Park), and “Everlasting.”  But they both come in the middle and end of the second act; far too late to be effective or set a musical tone for the score as a whole.

A beautiful ballet, however, enacting Winnie’s decision to refuse the water and grow from girl to woman, wherein she marries, has children of her own and then dies as part of the cycle of life, concludes the show and is deeply moving.  Some in the audience clearly didn’t appreciate the ballet, but there were many of us who did.  Additionally, the design elements of “Tuck Everlasting” are quite wonderful, even garnering a well-deserved Tony nomination for Gregg Barnes gorgeous costumes.  It would be the only Tony nomination the musical would receive.

In hindsight, considering it played an pre-Broadway engagement at the Alliance Theater in Atlanta, it’s a wonder producers made the decision to bring “Tuck Everlasting” into New York.  But such is the level of denial in the world of musical theatre.