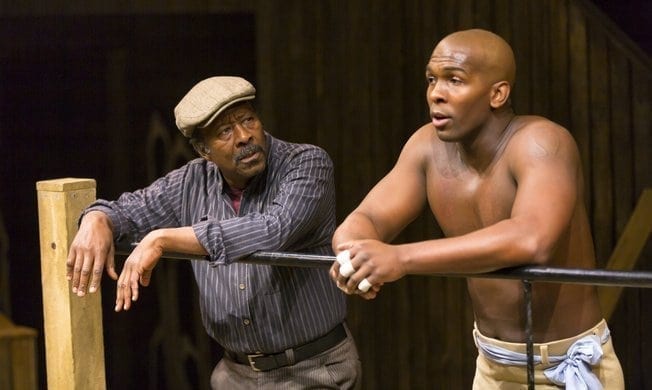 A sensational piece of theatre from every perspective, Marco Ramirez’s “The Royale” is beautifully designed, brilliantly staged and superbly acted.  Loosely based on the life of Jack Johnson, the first African-American heavyweight world champion boxer (whose life was previously dramatized in Howard Sackler’s highly successful, 1968 play and its subsequent film version, “The Great White Hope,” starring James Earl Jones and Jane Alexander), Ramirez has written a piece that’s a searing character study of man driven to be the best – no matter what the personal cost – as well as a social indictment of what it meant to be a Negro in the white man’s world of the early 1900’s.

Cleverly staged by the multi-talented Rachel Chavkin, “The Royale” is a play in which all its design elements coalesce to support and frame the cast telling the story.  The simple but effective sets by Nick Vaughan, the stylized, period costumes by Dede M. Ayite, the subtle and evocative lighting by Austin R. Smith and the non-intrusive sound by Matt Hubbs meld into the blaze of ambition and fury that Ramirez illuminates so fiercely.

All five members of the cast are remarkable for their natural intensity and their unerring sense of exactitude in what they’re trying to achieve.  As the fighter Jay, Khris Davis shows us the multiple layers of anger, despair and rage burning just under the surface of a man who’s mass of contradictions is racing to catch up with him.  And as Jay’s sister, Nina, who makes a stunning appearance late in the play, musical theatre veteran Montego Glover proves once again that woman who sing can also act, too.  But we knew that, didn’t we?