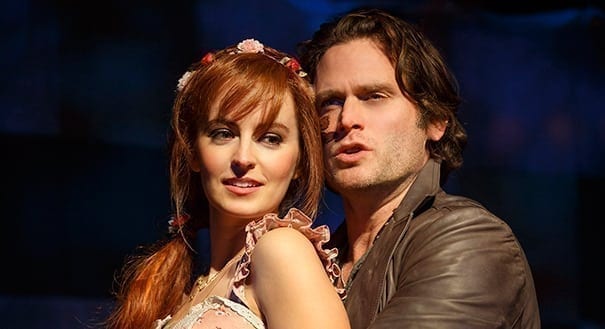 Roundabout at Laura Pels Theatre
Harold and Miriam Steinberg Center for the Theatre
February 18th thru May 29th
Opened March 13, 2016

A delicious, rollicking, delight of a musical, the Roundabout’s high-octaine revival of “The Robber Bridegroom,” starring Broadway’s definitive leading man, Steven Pasquale, is as beguiling as it is sweet.  Perhaps too sweet for some (and not sweet enough for others?), for true believers and acolytes of winsome charm, “Bridegroom” is a moonshine tonic to cure all your ills.

First seen in 1975 courtesy of the first class of John Houseman’s The Acting Company, “The Robber Bridegroom,” with book & lyrics by Alfred Uhry and music by Robert Waldman, came into New York in repertory with “Edward II,” “The Time of Your Life” and “The Three Sisters.”  It starred Kevin Kline as Jamie Lockhart and Patti LuPone as Rosamund, and stayed for a 2-week run at the Harkness Theatre.  The same production reappeared a year later at the Biltmore where it enjoyed a 5-month run starring Barry Bostwick as Lockhart and Robin Coullet as Rosamund, winning a Best Actor Tony for Bostwick in the process.    Since then “Bridegroom” has been relegated to summer stock and regional theaters where multitudes of actors and audiences have been exposed to its charms.

It’s wonderful to have “The Robber Bridegroom” back on the boards in New York, especially in this pitch-perfect production directed within an inch of its life by Alex Timbers and featuring a talented cast that zeros in on the zany lunacy of Eudora Welty’s original novella without losing their character’s humanity or pathos.  Leading the ensemble is the estimable Steven Pasquale as Jamie Lockhart, a bandit of the woods who “steals with style” and can break a heart with a raised eyebrow.  Pasquale’s swagger sends his sexiness factor off the charts, and when he sings – with what must surely be the greatest lyric baritone since John Raitt – everyone in a 5-mile radius of the Laura Pels Theatre literally swoons.  That he can also act seems downright unfair – but no one is complaining.  Pasquale’s the ‘real deal’ and anytime he’s on-stage makes whatever show it is a must-see event.

Fortunately, the rest of this “Bridegroom” cast are stars in their own right and can more than hold their own with Pasquale.  The sweet-voiced Ahna O’Reilly makes an enticing Rosamund, and the divine Leslie Kritzer is hilariously unleashed as Rosamund’s sexually frustrated step-mother, Salome.  Joining them in various antics which move the silly plot along are Lance Roberts as Clement Musgrave, Greg Hildreth as Goat, Andrew Durand as Little Harp and Even Harrington as Big Harp.  And all of this is set to a tuneful, Natchez-inspired score that’s wonderfully played by a 5-member, on-stage band led by conductor Cody Owen Stine with music coordination by John Miller.

To be sure, this high-spirited revival of “The Robber Bridegroom” is the perfect way for Roundabout to celebrate its 50th Anniversary Season.  Don’t miss it as we won’t see its like again soon…if ever!