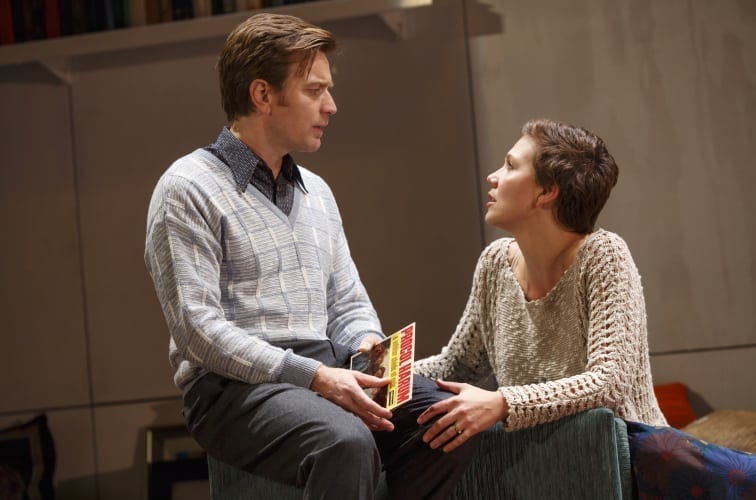 From the opening minutes of the Roundabout’s depressingly bad revival of Tom Stoppard’s The Real Thing, it’s clear the audience is in trouble.  With the exception of the charismatic film star Ewan McGregor, who’s making his Broadway debut in the play, this production is surprisingly miscast and unaccountably misdirected.  This is all the more shocking coming off Roundabout’s extraordinary season last year which opened with a stunning revival of Terence Rattigan’s The Winslow Boy followed by a riveting production of Sophie Treadwell’s rarely-seen Machinal.  What a difference a year can make. 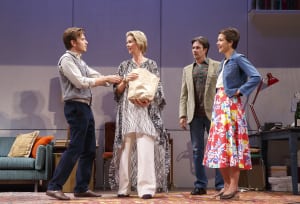 The blame for The Real Thing‘s shortcomings must be laid at the feet of director Sam Gold whose once promising career has been marred by one messy production after another, including the last two shows he’s directed for Roundabout; an uninspired Picnic and a clunky Look Back in Anger, both of which had casting issues.  If you’re going to do a play by a British playwright that’s set in London and revolves around British actors and their relationships with each other, you have to do one of two things: you either hire British actors to play the roles (as was done in the revival of 2000), or you hire American actors who can speak convincingly – and consistently – with a British accent (as was done in the original of 1984).  Unfortunately, Gold has done neither.  That a dialect coach – Kate Wilson –  is credited in the program is one of the show’s more lighthearted touches.  Of course, it also doesn’t help that the set is bland, the lighting harsh and the costumes ugly.

As Stoppard’s doppelgänger playwright Henry, McGregor, being Scottish, doesn’t have to do anything but act, which he does as well as can be expected considering the rest of the company doesn’t seem to have a clue what the play is about, again, thanks to a deficit of direction from Gold.  Henry is married to Charlotte, a stilted Cynthia Nixon, an actress starring in one of Henry’s plays opposite their friend Max, played by Josh Hamilton who confuses shouting with acting in this production.  Both Nixon and Hamilton’s British accents are as bad as they are inconsistent.  Henry is having an affair with Max’s wife, Annie, the lovely Maggie Gyllenhaal also in her Broadway debut, who’s also an actress as well as a vocal supporter of a political prisoner.  Gyllenhaal’s characterization and accent is better than Nixon’s or Hamilton’s, but she, too, simply isn’t believable as a Brit, not when today’s media is saturated with superb BBC miniseries and a plethora of Masterpiece shows on PBS. 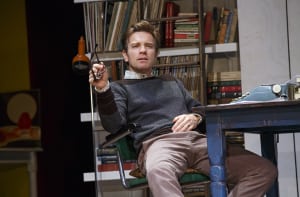 The Real Thing is about relationships between people, specifically the love and honesty couples work at within a marriage and how that changes over time due to circumstance and ideology.  Despite the fact that the audience is often viewing a play within a play in The Real Thing, the plot is relatively simple and not worth recapitulating here.  It’s Stoppard’s beautiful and literate writing about love and honesty which elevates the play to ‘art’.  The problem with Gold’s revival is none of the relationships on stage are believable or compelling.  The tempo of the dialogue is sluggish and off-kilter, and the proper tone is missing.  Gold has also made the monumental mistake of having the actors sing songs – badly, I may add – during the scene changes which is as ridiculous as it is embarrassing.  The audience doesn’t feel challenged or stimulated, they just feel trapped.