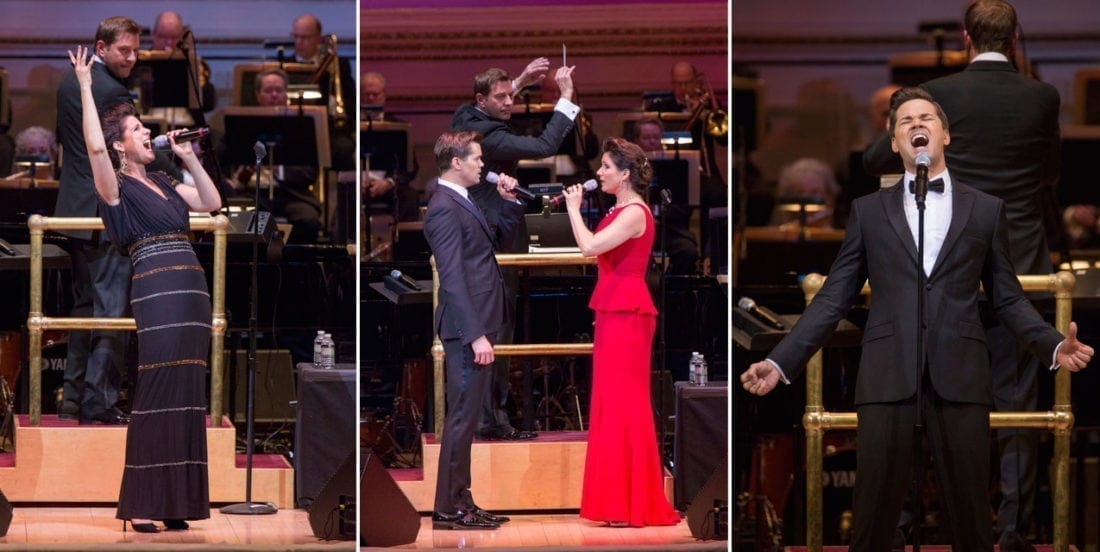 Originally programmed for the dynamic, married, Broadway couple, Marin Mazzie and Jason Danieley, The New York Pops had to recast their recent On Broadway concert when the talented Mazzie was cast in the new musical Bullets Over Broadway, which opens April 10 at the St. James.  Fortunately, the Pops secured the services of Stephanie J. Block and Andrew Rannells, two Tony-nominated stars who made a sensational – if unlikely – pairing!

Since assuming the Pop’s conductor’s baton in 2009, music director Steven Reineke has brought a renewed sense of vitality to the Pops’ programming, their playing and their performances, and their terrific On Broadway, seen on Friday, March 21, at Carnegie Hall, was no exception.  An accomplished composer and arranger himself, Reineke has an assured style on the podium and a youthful charisma that’s infectious to audiences.  His choice of Block and Rannells to join the Pops in this Broadway-themed program turned out to be an inspired choice for many reasons.

Block, a brassy belter known for her work in Wicked, The Boy From Oz, The Pirate Queen, Anything Goes, and her Tony-nominated turn as the title character in The Mystery of Edwin Drood, is also an accomplished solo performer who’s appeared in concert with many prestigious orchestras around the country.  She’s known for her powerful chest voice that she used to dazzling effect on “Don’t Rain On My Parade” from Funny Girl, “Meadowlark” from The Baker’s Wife, and “Defying Gravity” from Wicked – all staples in a belter’s repertoire but rarely as brilliantly sung as Block sings them.  She has a warm, bright sound in her middle register that grows into a controlled, Thor’s hammer as she climbs to the top of her belt.  Her ringing top notes are as thrilling as they are secure and accurate.  But Block also has a classically trained head voice employed to stunning effect in duets with Rannells such as “If I Loved You” from Carousel, “I Have Dreamed” from The King and I and, most impressively, “Move On” from Sunday in the Park with George.  It is a great instrument, and Block is a polished and classy singer, clearly at ease in front of an audience and a natural comedienne based on her rapport with Rannells.

For his part, Rannells, who became a star in the Tony-winning smash hit, The Book of Mormon, made a welcome return to musical theatre after his recent television work in the short-lived (and underrated) The New Normal on NBC, as well as his current gig as a recurring character on HBO’s Girls.  Possessing a gleaming, lyric tenor with soft, warm shadings, Rannells has an undeniable flair for comedy and his off-the-cuff exchanges with the audience garnered hearty laughs.  His opening pair of songs was from Flaherty & Ahrens poignant show, A Man of No Importance, and they showcased his range beautifully.  Singing the anthem “The Streets of Dublin,” followed by the heartfelt ballad, “Love Who You Love,” Rannells’ sweet, warm sound brought the perfect inflection to both pieces.  Additionally, Rannells gave heartfelt – and successful – readings of two standards in the tenor’s repertoire, “What Kind of Fool Am I?” from Stop the World – I Want To Get Off, and “Being Alive” from Company.  Granted, both of these songs are over-performed but Rannells’ wry, understated acting in both pieces, along with his terrific singing, more made the case for putting his stamp on them.

As always, the Pops’ playing for Reineke was appropriately lush and embracing.  Musical highlights would include their rendering of the stirring South Pacific overture with Robert Russell Bennett’s legendary arrangement, Reineke’s own arrangement of “Ragtime” from Ragtime and the “Cinderella Waltz” from Cinderella.  My only quibbles would include the occasional fumbled note in the trumpet section (that kept recurring throughout the concert) and less than effective arrangements of songs from Gypsy and West Side Story.  When you’ve got the “Overture” from Gypsy and the “Symphonic Dances” from West Side Story at your disposal – why would you perform anything else?