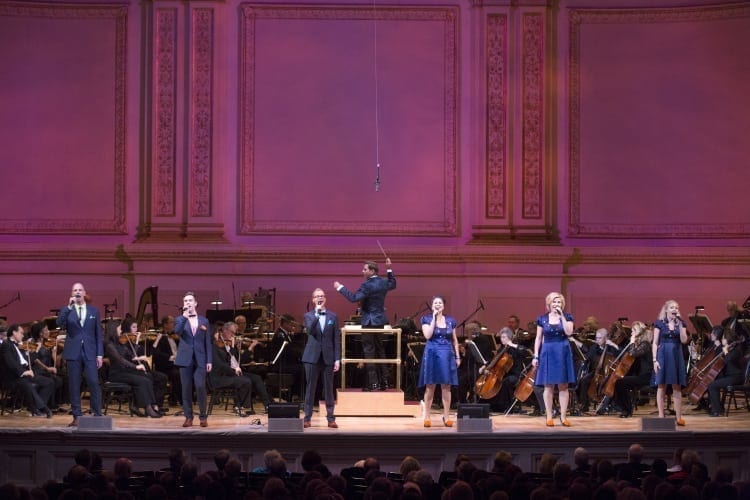 For any performer or musical group, celebrating the music of The Beatles is very tricky business.  Diehard fans and even the casual listener have John Lennon and Paul McCartney’s classic songs fixed in their minds from the original recordings to the point of obsession, with many convinced the Beatles’ interpretations are perfection the way they are and don’t need improving.  Such was the challenge facing music director Steven Reineke and The New York Pops when they decided on an evening of Beatles tunes to open their 32nd season at Carnegie Hall on October 24th.  Fortunately, they partnered with the Finnish a cappella group Rajaton for All You Need Is Love: The Music of the Beatles with results that were as innovative as they were surprising. 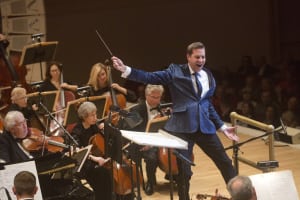 Comprised of six talented vocalists, Essi Wuorela (soprano), Virpi Moskari (soprano), Saime Hyokki (alto), Jukka Nylund (tenor), Ahti Paunu (baritone) and Jussi Chydenius (bass) on this outing, Rajaton is celebrating its 17th anniversary this fall and has a slew of successful recordings to its credit.  It’s Rajaton who brought the Beatles evening to The Pops, having previously performed it in August with the Lahti Symphony Orchestra in Finland, with orchestral arrangements by Jaakko Kuusisto and vocal arrangements by the group’s bassist, Chydenius.  Opening with a medley of early hits The Beatles performed on The Ed Sullivan Show in 1964, the first act consisted of a daring presentation of the landmark 1967 album, Sgt. Pepper’s Lonely Hearts Club Band, in its entirety.  Purists might be aghast, but a case can be made the result was a triumph.  Kuusisto’s creative and inspired arrangements for The Pops, including the famous atonal, aleatoric crescendos in “A Day in the Life,” allowed the audience to hear Lennon & McCartney’s brilliant collaborations from a different musical perspective.  Beloved melodies took on new resonance with their iconic lyrics being given a different canvas on which to be heard.  The performance of “She’s Leaving Home” was particularly effective.  Similarly, the same praise can be given to Chydenius’ intricate vocal arrangements for Rajaton, whose wonderful singing is comparable to the best of the famous close-harmony groups including The Hi-Lo’s, The King’s Singers, The Manhattan Transfer and Take 6. 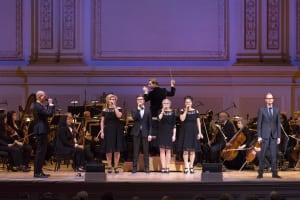 The second act of the evening was comprised of performances of many of The Beatles’ number one hits including: a heartfelt “Yesterday” by baritone Paunu, a sumptuous “The Long and Winding Road” by soprano Wuorela and a jaunty “Penny Lane” led by group’s bass, Chydenius, whose enormous, ringing voice would be the envy of any opera company or choir.  There was the occasional musical moment when arranger Kuusisto allowed the vocalists to shine to the detriment of the orchestra, most notably the fabulous piccolo trumpet solo in “Penny Lane” was a missed opportunity for one of the trumpeters in The Pops when the three women of Rajaton got to sing it instead – less effectively, in my opinion.  To be sure, Rajaton is clearly in its element when signing a cappella as evidenced by “Lady Madonna” and the group’s first encore, a spellbinding “Eleanor Rigby” which, for me, was the vocal highlight of the evening; though it’s clear they enjoy singing with a big orchestra, too, especially one as terrific as The Pops.  Rajaton’s balance and blend are superb, with their English diction – for the most part – excellent.  I left wanting to go home and peruse their catalogue of recordings on-line – all while humming The Beatles, of course.

The New York Pops: Friday, November 14, 2014 at 7:30 pm – By Special Request: An Evening with the Orchestra will feature music by Aaron Copeland, George Gershwin and Leonard Bernstein; and Friday, December 19, 2014 at 7:30 pm – Home for the Holidays, starring Kelli O’Hara and Matthew Morrison.  Both concerts will also feature Essential Voices, USA, with music director Judith Clurman.