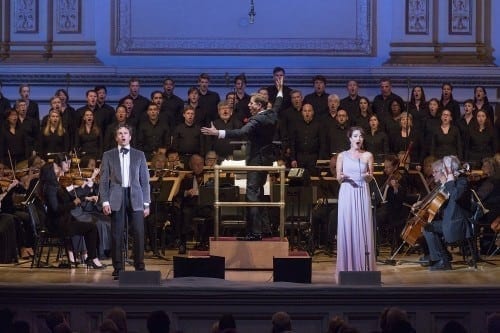 The New York Pops – My Favorite Things: The Songs of Rodgers and Hammerstein ★★★★☆

The New York Pops opened their 33rd season October 9th with a classic program entitled My Favorite Things: The Songs of Rodgers and Hammerstein.  But if you think that meant another stuffy evening of American songbook fare you’d be oh-so-very wrong.  The skillful Pops orchestra, under the ever-more assured direction of Steven Reinek, dug into the R&H cannon with gusto and their trademark lush sound to give the audience a thrilling evening of rapturous standards – all performed with a freshness that was startling.

Moving thru the songwriting duo’s oeuvre in chronological order, instead of opening with the well-known “Overture” from the Broadway production of Oklahoma with its arrangement by Robert Russell Bennett, Reineke opted for the superb, 1955 film “Overture” which segues into the “Main Title” and “Oh, What a Beautiful Mornin’,” with a gorgeous arrangement by Adolph Deutsch and orchestration by Alexander Courage.

Singing Curley’s famous opening song, and handling the Pop’s leading-man duties all evening, was handsome British heartthrob Julian Ovenden who filled in at the last minute for a previously announced Steven Pasquale.  Ovenden, who has a bright, lyric tenor (as opposed to Pasquale’s more full-bodied, dramatic baritone), may be best known for his television work on Downton Abbey, Person of Interest and Foyle’s War, but he’s equally at home in musical theatre having starred to critical acclaim in many West End productions.  His voice throbs with passion and, though we missed getting to hear Pasquale sing the “Soliloquy” from Carousel (as he just to did to much acclaim this summer at the Lyric Opera of Chicago), Ovenden acquitted himself with polish and elegance, particularly on “You’ve Got to Be Carefully Taught” from South Pacific and “Edelweiss” from The Sound of Music.

Joining Ovenden in the evening’s leading-lady duties was the beautiful Sierra Boggess who radiated glamour and talent in equal measure.  With her soaring soprano, Boggess especially excelled in a series of duets with Ovenden, including “People Will Say We’re in Love” from Oklahoma, “I Have Dreamed” from The King and I and “No Other Love” from Me and Juliet.  In addition, Boggess took “The Gentleman Is a Dope” from Allegro and “I Enjoy Being a Girl” from Flower Drug Song  and made them her own, much to the audience’s delight.

Throughout the evening, The Pops sounded utterly wonderful, particularly playing the famous “Carousel Waltz” (orchestrated by Don Walker) and the “Cinderella Waltz” (orchestrated by Robert Russell Bennett).  Throw in the luxurious support of Essential Voices USA providing excellent choral support throughout the program and you’ve got an evening of entertainment that proved positively rapturous.  Don’t miss The Pops’ upcoming concerts: “Sophisticated Ladies” – a tribute to Billie Holiday and other African-American icons starring Montego Glover, Capathia Jenkins and Sy Smith on November 13; and “It’s Christmas Time in the City” featuring Stephanie J. Block and Brian d’Arcy James on December 18-19.