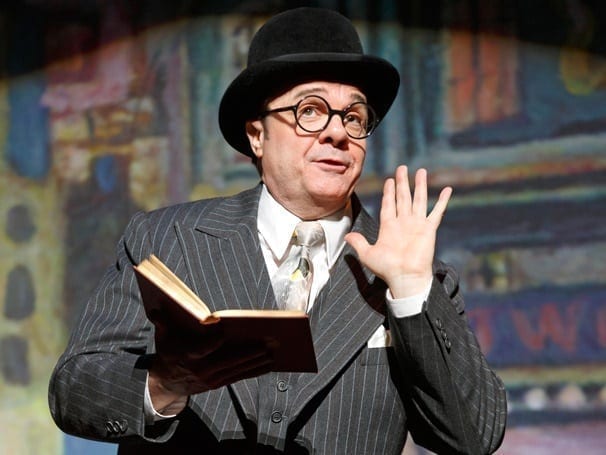 The Nance, The Big Knife and The Assembled Parties

Set in 1937 during the fading twilight of burlesque, Douglas Carter Beane’s The Nance is a riveting drama about the life of a closeted man set against the backdrop of show business.  It’s the most ambitious work by Beane to date and provides a dazzling showcase for the amazing Nathan Lane.  Directed with sharpness by Jack O’Brien, Lane plays Chauncey Miles, a former vaudevillian now portraying a flamboyant ‘Nance’ in a burlesque show run by Efram (the excellent Lewis J. Stadlen) and starring a trio of jaded strippers (the sensational Cady Huffman, Jenni Barber and Andrea Burns).  Chauncey lives with self-loathing and low self-esteem when his world is turned upside down by a beautiful, young man, Ned (the wonderful Jonny Orsini) who comes into his world but not his heart.  Chauncey feels unworthy of being loved and The Nance heartbreakingly charts the disintegration of his relationship as burlesque is shuttered by Mayor LaGuardia.  All of Lane’s comedic and dramatic skills are put to use in The Nance as Beane and O’Brien intercut scenes of real life with vintage burlesque numbers.  It’s a dazzling tour-de-force for Lane, and a marvelous period piece, marred only by inconsistencies in Beane’s writing of Chauncey, a self-proclaimed conservative who Beane unaccountably betrays by giving him speeches and actions that contradict both the times and the person we know Chauncey to be.

Following the wonderful, recent revivals of Clifford Odets’ Awake and Sing! (1935) and Golden Boy (1937), Roundabout has miscalculated with a deadly dull mounting of Odets’ The Knife (1949) starring a charm-free Bobby Cannavale as a movie star struggling with the evils of Hollywood and the dictates of his conscience.  The Knife is badly directed by Doug Hughes despite a breathtaking set by John Lee Beatty and a raft of zesty supporting performances.  Cannavale acts nothing like a movie star and the usually superb Marin Ireland is miscast and adrift as his unhappy wife.

MTC has a hit on their hands with Richard Greenberg’s moving new comedy-drama, The Assembled Parties.  Despite the clunky title, Greenberg’s story of a fractured Upper West Side, Jewish family told twenty years apart is an absorbing, hilarious examination of the ties that bind us and pull us apart.  Headed by sisters-in-law Jessica Hecht and Judith Light, along with close family friend Jeremy Shamos, The Assembled Parties is a character study that plays like chicken soup for the soul.  Expect multiple Tony nominations all around.