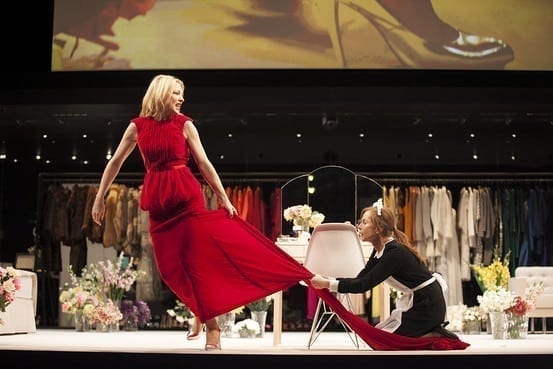 First staged in Paris in 1947, Jean Genet’s The Maids, an absurdist exploration of identity, servitude, and social class, is a tricky play to get right.  This was made evident again by the Sydney Theatre Company’s (STC) production which just concluded a short, albeit sold-out, engagement (August 6-16) at New York City Center as part of the 2014 Lincoln Center Festival (LCF).  Directed by Benedict Andrews using a new translation by Andrews and Andrew Upton, The Maids was a sell-out due to the luminous presence of Australian film star Cate Blanchett and French film legend Isabelle Huppert who portrayed Genet’s downtrodden domestics, Claire and Solange, respectively.  But an box-office success doesn’t always result in an artistic triumph as STC’s The Maids proved. 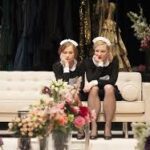 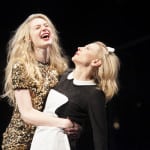 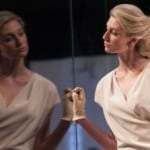 Following her critically lauded stage appearances in STC’s Uncle Vanya in 2012’s LCF and A Streetcar Named Desire in 2009 at BAM, not to mention her Oscar-winning performance in Woody Allen’s Blue Jasmine, Blanchett’s presence in The Maids guaranteed STC the kind of attention and box-office other theatre companies can only dream about.  And rightly so.  Blanchett is a phenomenal actress and her performance in The Maids was a heart-breaking, riveting portrait of a sibling driven to the edge of madness.  Matching her hammer for tongs was Elizabeth Debicki (seen recently as Jordan Baker in Baz Luhrmann’s ill-advised, 2013 remake of The Great Gatsby) who made a smashing American stage debut as Claire and Solange’s ‘Mistress’.  Unfortunately, the casting of Huppert and a new translation by Andrews and Upton (Blanchett’s husband) ended up rendering The Maids a bit of a mess.  An interesting mess, to be sure, but a mess nonetheless.

Revered in French cinema, Isabelle Huppert’s accent rendered her performance as Solange almost completely unintelligible.  This writer strained for the first 40-45 minutes of the piece trying to understand what she was saying and it was only towards the end of the play that she became only slightly easier to understand.  She was certainly on the same wave-length as Blanchett in terms of their characterizations and acting choices, but her inability to master and enunciate her dialogue in English severely undermined the production as a whole.  How director Andrews thought Huppert and Blanchett could pass as sisters since they look and sound nothing alike is anyone’s guess.  Additionally, Solange has a long and complicated soliloquy at the end of The Maids that simply eluded Huppert’s abilities.  As for the new translation, Andrews and Upton’s contemporary additions and liberal use of the “c” word were as vulgar as they were unnecessary.  Genet uses role-playing as a device for Claire and Solange to search for their identities in a seemingly futile existence of physical and emotional slavery.  The temptation to pepper the dialogue with crude profanity may be tempting, but it’s also short-sighted and flies in the face of the literary style Genet employed.

Though not a new directorial device, Andrews use of video throughout The Maids was provocative and added to the tension of the sister’s continuing attempts to “kill” their Mistress during their role-playing scenes together.  Designed and operated by Sean Bacon, the brutal close-ups of Blanchett and Huppert drove home their emotional devastation, especially as contrasted by Debicki’s youthful face, still unsullied by time and social position.  The sleek, glass-walled set and fashionable couture by Alice Babidge, atmospheric lighting by Nick Schlieper and sound design (all three actresses wore body mic’s) by Luke Smiles all enhanced the ambiance Andrews was striving to achieve.  Sadly, as the gap between the have’s and the have not’s of the world continues to spiral out of control, Genet’s observations about ownership, fantasy and poverty are as timely today as they were 70 years ago.