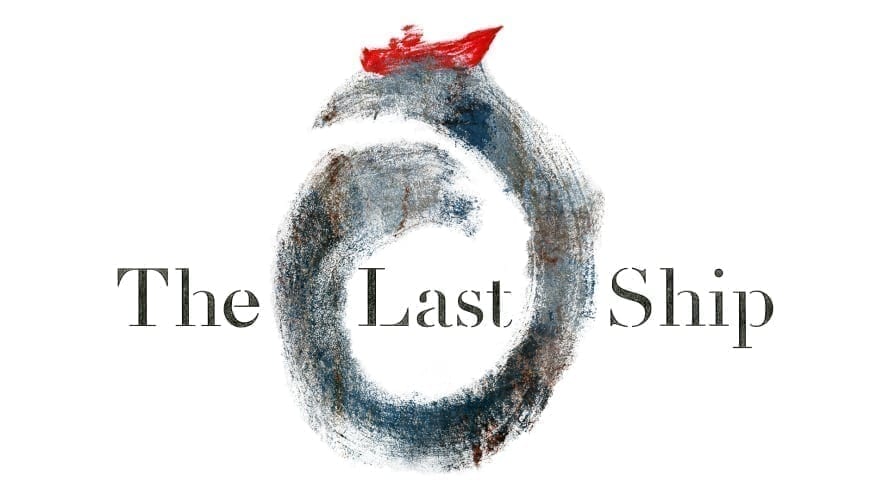 The most remarkable thing about The Last Ship, a new musical which owes its score and, indeed, its very existence to pop-singer Sting, is how unbelievably ridiculous its book is, even though it’s attributed to two acclaimed writers, John Logan and Brian Yorkey.  Logan, who’s an over-achiever in multiple mediums with Penny Dreadful on Showtime, Oscar-nominations for Gladiator, The Aviator and Hugo, and a Tony-winner for Red, as well as Yorkey, who won both a Tony and a Pulitzer for the over-rated Next to Normal, should know better.  It’s so ridiculous, in fact, it’s impossible to imagine Logan and Yorkey sitting in a darkened theatre watching rehearsals and not raising a red flag (or a white one, in this case).  And this after The Last Ship previewed over the summer in Chicago where its decidedly mixed reviews said the same thing: fix the book!  Sadly, for whatever reason they didn’t or couldn’t which leaves a potentially interesting new musical sitting forlornly in dry-dock at the Neil Simon on Broadway. 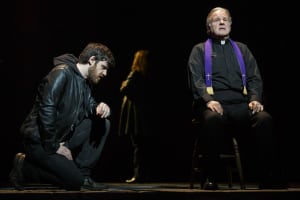 Inspired by Sting’s autobiographical, third studio album from 1991, The Soul Cages, which was written following his father’s death in 1989 when he was plagued with writer’s block, The Last Ship is set in Sting’s hometown of Wallsend in Newcastle.  It wants to tell two stories simultaneously, stories that are inextricably linked due to their location and circumstance, but which are otherwise unrelated to each other.  The first story is a love-triangle in which Gideon Fletcher (a persuasive Michael Esper) – who escaped to a life at sea 15 years earlier unaware he was about to become a father – returns to find his girlfriend, Meg Dawson (the lovely Rachel Tucker), now partnered with a terrific guy, Arthur Millburn (a compelling Aaron Lazar), raising his son, Tom (Collin Kelly-Sordelet, in a strong debut), without him.  Arthur continually asks Meg to marry him but she resists.  Gideon’s reappearance stirs up old feelings and forces Meg to choose between a childhood love and an adult reality.  The second story revolves around the closing of the local shipyard, a victim of 1980’s economics (ships are built more cheaply in Korea and Japan) and the blue-collar, union-worker’s resistance to accepting new jobs working for a salvage operator instead of a ship builder.  Gideon’s father worked in the shipyard before becoming disabled in an industrial accident, and wanted Gideon to work there, too.  But Gideon fled his father’s dreams – and physical abuse – only to return to a community out-of-work and filled with angry resentment. 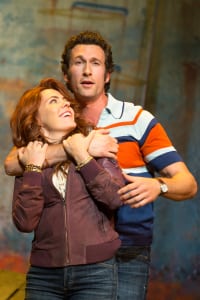 But here’s where The Last Ship flounders.  The local priest, Father O’Brien (the reliable Fred Applegate, who can’t help bringing comic relief to the grimness that surrounds him) gets the cockamamie idea of stealing from his church’s ‘rebuilding fund’ to finance the construction of a new ship at the shipyard to give the workers something to do and regain their pride.  (Really?!  Does this priest have any idea how much money it would take to actually build a ship like the one portrayed in this show?)  The problem is the shipyard’s already been sold to a salvage entrepreneur for whom Arthur works.  Well, since it’s a musical, the workers decide to storm the yard, take it over (they feel it’s ‘theirs’ after all) and start building their ship – even though they’re trespassing and breaking the law.  Somehow, magically – again, because this is a musical – the new owner doesn’t have them arrested and they build their ship even though they have no one paying for it and no one has a clue what they’ll do with it once it’s built.  Even the shipyard’s foreman, Jackie White (a commanding Jimmy Nail), wonders aloud who the buyer is and what the ship’s to be used for – but to no avail.  There are sea-chanteys to be sung and beer steins to be clinked together and Steven Hoggett’s pretentious, Once-esque choreography to be danced, so who wants to bother with those kinds of unpleasantries.

Flash-forward 2 1/2 hours of your life later, Father O’Brien – who’s spent the middle half of the show dying of some unspecified malady, yet watching the ship being built from his hospice bed – finally dies just before the ship is to be launched on her maiden voyage.  This provides the company with another opportunity for a production number in the bar (more clinking of beer steins) before they put his coffin on the new vessel to give him a much-deserved burial at sea.  Meg finally decides to choose the steady Arthur over the unemployed Gideon (no surprise, considering Arthur is played by the dashing Aaron Lazar) but – in a tearful fit – allows young Tom to join Gideon on the maiden voyage of the S.S. Father O’Brien.  Gideon promises to have Tom back by ‘the spring’ (whatever that means) and it seems that the son, like the father, is drawn to the sea to seek his future.  But where is the ship going?  We don’t know.  Who is sailing the ship since there’s no apparent crew, only the ship builders on board?  We aren’t told.  What will the shipyard workers do for jobs and money when they get back?  It isn’t clear. 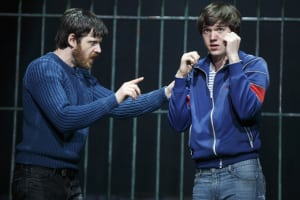 What is clear is the talented, hard-working cast does their best to sell this nonsense and almost pulls it off through sheer grit and determination.  Michael Esper, especially, is incredibly charismatic and makes us root for Gideon even though every line out of his mouth raises more questions than it answers.  There are several lovely songs in Sting’s tuneful score, notably “August Winds,” hauntingly sung by Rachel Tucker, and “What Say You, Meg?,” which the aforementioned Aaron Lazar sings beautifully with his creamy, lyric baritone.  But there’s also a surplus of those barroom sea-chanteys and the entire score seems to be written in 12/8 time which grows wearisome after the first hour.  Wearisome, too, is the dark, grimness of the productions design by David Zinn (sets & costumes), Christopher Akerlind (lighting) and Brian Ronan (sound).  Though artfully and professionally executed, did no one suggest using video projections to facilitate providing an actual representation of the ship itself?  The absence of any visible ship, even a digital one, leaves a hole with the audience almost as big as the absence of the ship’s sheer feasibility.  Even Titanic had a ship on-stage.  Ironically, the ship in both shows meets the same fate.