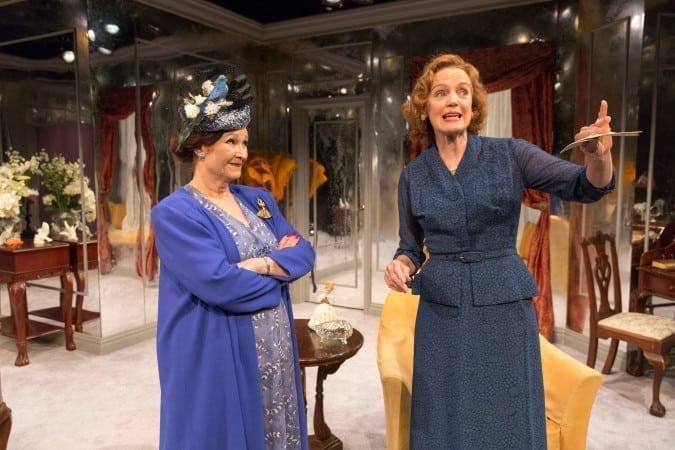 Thank god for the resourceful and indefatigable Mint Theater Company! How else would we ever get to see so many lost gems by so many forgotten writers; writers – it should be pointed out – who were often wildly popular and celebrated in their day.  A case in point is The Mint’s current, sparkling production of George Kelly’s “serious comedy,” The Fatal Weakness.  Having previously seen and enjoyed Kelly’s The Show-Off (1924) at the Roundabout in 1992 (starring Boyd Gaines and Pat Carroll), The Torch Bearers (1922) at Drama Department in 2000 (starring the divine Marian Seldes and Faith Prince), and The Mint’s own Philip Goes Forth (1931) just last year, I was especially eager to see The Fatal Weakness (1946), Kelly’s last Broadway play and one with a plum role for “a woman of a certain age.”

Perfectly embodying the hallmarks of “the Kelly Play,” (the program notes define these as “trenchantly honest, ‘serious comedies’ examining middle-class morals and manners”), The Fatal Weakness’s central character is Mrs. Ollie Espenshade – a woman in her mid 50’s who finds her 28 year-old marriage at a crossroads when she discovers her husband has fallen in love with another woman.  A hopeless romantic who cries at the weddings of strangers, over the course of several months Ollie proceeds to untangle her feelings about her husband, her marriage her daughter’s marriage and – perhaps – a future alone, all in regal and often hilarious style.  Full of witty social commentary laced with stinging barbs, Kelly, who was also Grace Kelly’s uncle, championed feelings above ideas and literate dialogue over lightweight banter, and The Fatal Weakness, though not a masterpiece, is further proof of his terrific writing which holds up on its merits decades later. 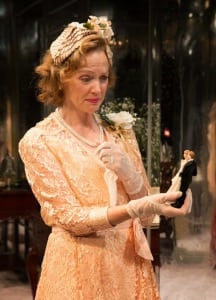 Essaying Ollie Espenshade for The Mint is one of their regulars, Kristin Griffith, who knows a good part when she sees it and ends up delivering the goods in grand fashion. Ollie is a tricky role because, while she’s often quite funny and dithering, at her core she’s sad and lonely.  And her character really transforms over the course of the play’s three acts, which fly by in director Jesse Marchese’s streamlined production. Griffith’s nuanced and subtle performance walks this delicate line beautifully; she finds the perfect blend of Billie Burke and Greer Garson in her lighter-than-air portrayal. The audience wants Ollie to get what she wants – whatever that may be. 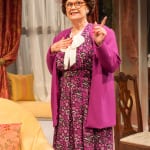 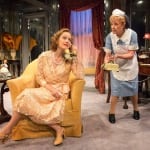 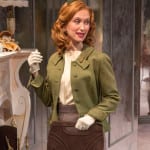 Aided and abetted in uncovering her husband’s romantic dalliance is Ollie’s well-connected (some would say busybody) friend, Mabel Wentz, played with delicious elan and crackerjack timing by Cynthia Darlow, a real pro who knows her way around a raised eyebrow and a withering retort.  Mabel makes appearances in all three acts of The Fatal Weakness and you can feel the audience collectively smile and settle back when Darlow strides onto the stage because every utterance out of her mouth will be a gem.  So too, the rest of the supporting cast is terrific!  Patricia Kilgarriff is the quintessential Irish maid, lingering at doorways and shooting furtive glances across the room when something untoward strikes her ear.  Victoria Mack, in the play’s most difficult – and underwritten – role, plays Ollie’s unsympathetic daughter Penny with just the right note of disapproval and self-righteousness. 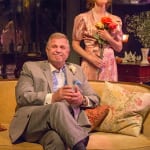 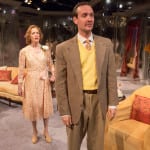 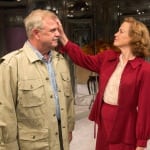 Cliff Bemis, as Ollie’s put upon husband, also navigates treacherous water as Paul Espenshade.  He must remain likable in his infidelity and Bemis manages that with grace in the face of an impossible situation.  And, finally, the handsome Sean Patrick Hopkins plays Penny’s husband, Vernon.  He only has one scene with Ollie, but it’s a critical one and Hopkins manages to convey the frustration of a son-in-law who’s trying to not say too much or too little in the face of mounting confusion about his own marital problems.  Hopkins’s understated approach is spot-on, thanks in large part, no doubt, to the steady and precise direction by Marchese whose work here gets an unqualified rave.

Lastly it must be highlighted, as it frequently is in reviews of shows at The Mint, how amazing the sets (Vicki R. Davis), costumes (Andrea Varga), wigs (Gary Arave), props (Joshua Yocum), sound (Jane Shaw) and lights (Christian DeAngelis) are on what must be a shoestring budget and a prayer. Much of the success for this revival of The Fatal Weakness can be attributed to these hard-working designers and artists whose scrupulous attention to detail does not go unnoticed by appreciative fans.