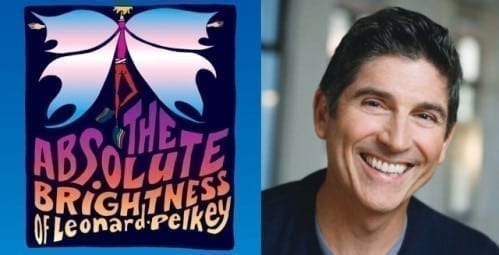 The Absolute Brightness of Leonard Pelkey ★★★★★

A beautiful gem of a performance-piece, The Absolute Brightness of Leonard Pelkey pulls together author and performer James Lecesne’s gifts as storyteller, actor, advocate and activist to dazzling effect.  Neither showy nor flashy, it pulls off the enviable feat of being quietly understated while also delivering an emotional punch that leaves audiences thinking and talking about what they’ve just seen.  It’s what truly great theatre should be, but so rarely is.

Adapted from Lecesne’s Absolute Brightness, a 2008 young adult novel published by Harper Collins, and first seen at Provincetown’s Afterglow Festival in September, 2014, The Absolute Brightness of Leonard Pelkey is many things.  A who-done-it mystery combined with a shrewd character study of small-town life saturated with everyday fears and longings, Lecesne’s deft monologue examines the denizens of a small, New Jersey shore town as they deal with the disappearance of 14-year old Leonard Pelkey, a flamboyant presence unashamed to be himself and unafraid to be gay.  Our primary narrator thru Leonard’s story is Chuck DeSantis, a weathered, Jersey detective with an accent to match who doesn’t suffer fools gladly and is determined to get at the truth surrounding Leonard’s disappearance.  Along the way we meet, and Lecesne effortlessly morphs into: Chuck’s brash, loud-mouthed colleague Marty Branahan; Ellen Hertle, the owner of the local beauty salon and Leonard’s aunt; Ellen’s shy but introspective daughter Phoebe; Buddy Howard, a fey, British drama school owner who saw and encouraged Leonard’s talent; Gloria Salzano, a mob widow whose sharp eye discovers several important clues to assist the investigation; Marion Tochterman, a friend and customer of Ellen who goes with her to the morgue to identify Leonard’s body; Otto, an older German man who runs a clock repair shop who befriended Leonard; and Travis Lembeck, a local kid who bullied Leonard. 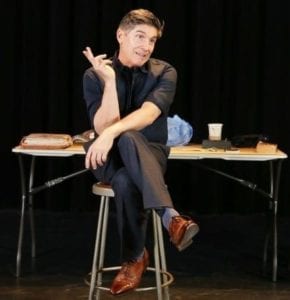 Of course the one person we never meet or see is Leonard himself, but that’s the magic of Lecesne’s artistry as a performer and shrewdness as a writer.  Slowly and methodically, through the course of meeting all the people who Leonard touched and transformed, we get to know and care for Leonard, which makes the revelations at the play’s end all the more heart-wrenching.  Lecesne’s previous work includes his 1995 solo show, Word of Mouth, which won Drama Desk and Outer Circle Critics Awards, as well as Trevor, his short film which won an Oscar the same year for Best Live Action Short and led to the founding of The Trevor Project in 1998, the only nationwide 24-hour suicide prevention line for LGBT and Questioning youth, of which Lecesne is a co-Founder. 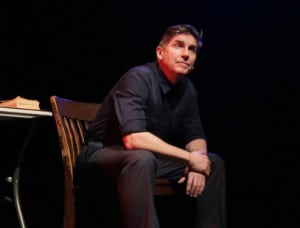 But there’s no preaching in The Absolute Brightness of Leonard Pelfrey, just superb story-telling that opens a window onto the human condition.  Using a spare staging courtesy of director Tony Speciale (CSC’s Unnatural Acts), a minimum of props and projections by Matthew Sandager, and lovely and unobtrusive music by Tony-winner Duncan Sheik (Spring Awakening), Lecesne spins his tale the old-fashioned way.  He simply tells his story.  But the results are extraordinary, indeed.