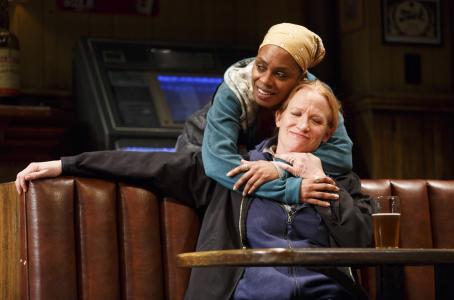 If ever a new play was at the right place at the right time it’s Lynn Nottage’s Sweat, now ensconced at Studio 54 following a successful run at The Public Theater last fall and, before that, productions at the Oregon Shakespeare Festival and Arena Stage in Washington, D.C. in 2015.  To be sure, it’s wonderful Nottage is finally represented on the Great White Way, but I was less convinced by Sweat than most critics so my opinion is definitely in the minority.  I think it’s a good play but I don’t think it’s a great one, and I was both surprised and disappointed it transferred to Broadway when Nottage’s far better Intimate Apparel and Ruined did not.

Capitalizing on the political strife roiling the country, the anti-immigrant sentiments espoused by the new administration, and the continuous depletion of blue-collar jobs throughout the country, Sweat is a portrait of unionized factory workers in Reading, Pennsylvania, watching their American dreams spiral down the drain.  Their way of life is over for these working-class Americans, they just don’t know it yet.  It’s a dissection of friendship, loyalty, and race as filtered thru a plant closing which shatters lives and extinguish dreams.

Sweat opens in 2008 on a parole officer, Evan (Lance Coadie Williams), meeting separately with Jason (Will Pullen) who is white, and Chris (Khris Davis) who is black.  The men are being released on parole for an unknown crime that happened eight years earlier and the action flashes back to 2000 where their story unfolds.  The real action of Sweat  takes place in a bar where a core group of factory workers meet after their shifts to knock a few back and live their lives.  Stan (James Colby) owns the place, Oscar (a quietly powerful Carlo Alban) suffers in silence as his bar-back, and Cynthia (a superb Michelle Wilson), Tracey (the hardworking Johanna Day) and Jessie (Alison Wright) are the regulars who hold court in a banquette.  Brucie (the wonderful John Earl Jelks) shows up from time to time to borrow money from his wife Cynthia and his son Chris, as well as Chris’ friend Jason whose mother is Tracey.  The three women are best friends whose primary past-time seems to be boozing it up and complaining about their life in the factory as union workers on the shop floor.

But change is coming, and not just whether Cynthia or Tracey is going to be chosen as the new supervisor.  The changes Nottage details in painful detail (after doing extensive interviews with laid-off workers in Reading, PA) involve cutbacks, layoffs, relocations to Mexico and the disintegration of lifelong friendships.  The growing anger and frustration in Nottage’s characters is palpable and, when it comes to a boil, an act of violence occurs that changes the fates of those involved irrevocably.  As the story comes full circle, it’s clear these are the same blue-collar workers who voted for Trump in the last election.  It hasn’t dawned on them yet how misplaced their confidence was and remains.  It’s an American tragedy and we are the witnesses.