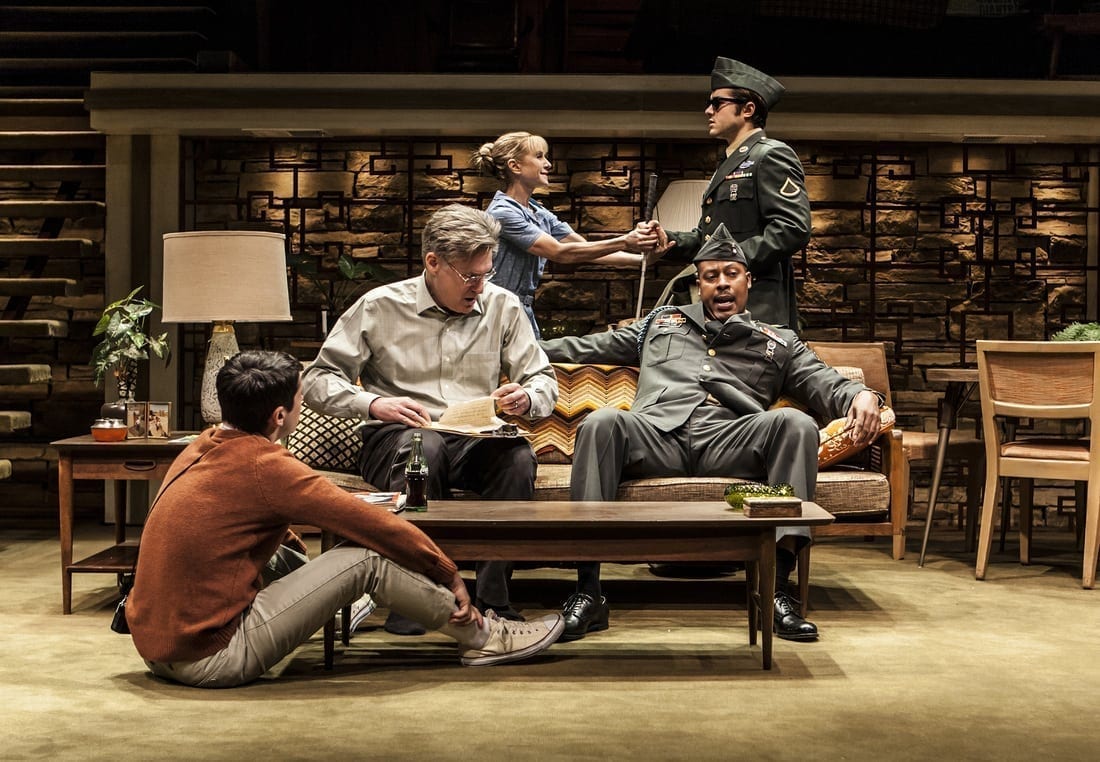 Watching David Rabe’s brilliant yet disturbing drama Sticks and Bones today, it’s impossible to imagine how shocked audiences must have been 40 years ago when it was first staged at The Public and on Broadway.  And though it won several Tony Awards in 1972, including Best Play, it was challenging material that remained ‘unpopular’ during it’s short run.  Decades later in the harrowing new revival of Rabe’s black comedy by The New Group, not much has changed.  Sticks and Bones  remains both provocative and shocking, which is as surprising as it is sad.  America may think it’s learned a lot sending young men off to fight and kill in the intervening decades, but, in actuality, we’ve learned nothing.  To his credit, Rabe‘s prescient foretelling of war’s psychological devastation was more accurate than he could have known.  As for Sticks and Bones, well, it was way ahead of its time. 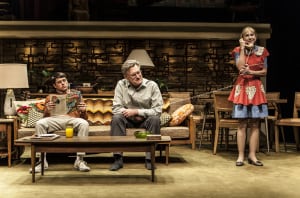 But perhaps its time has come thanks to The New Group and director Scott Elliott who have assembled a top-notch cast to bring this play out of the shadows and back to the stage.  Sticks and Bones plot is relatively simple; it’s Rabe’s inspired twist that gives it a unique perspective.  A family is waiting for the return of their eldest son from the Vietnam war.  But this isn’t any family.  It’s a parody of the ‘perfect,’ all-American family, The Nelsons, known to the country from The Adventures of Ozzie and Harriet, which ran on ABC from 1952 to 1966 following an earlier life on the radio.  The Adventures of Ozzie and Harriet was created by band leader Ozzie Nelson and his singer-wife Harriet Hilliard, and also starred their two real-life sons David and Rick, the latter – as Ricky Nelson – became one of the top teen idols of the late 50’s and early 60’s.  Wildly popular, the episodes were often based on real-life incidents that had happened to the Nelson’s, and 1950’s America was enthralled with a show where the simplest of problems could easily be solved in a half an hour.  The Nelson’s quickly became an idyllic representation of what many American’s assumed every family should be – but that kind of manufactured perfection was hard for many and impossible for most. 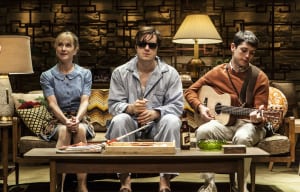 In Sticks and Bones,  Ozzie is played by Bill Pullman (The Goat, or Who is Sylvia?, Oleanna, Peter & Jerry), in a revelatory performance of depth and nuance, and Harriet is portrayed by the wonderful Holly Hunter (Crimes of the Heart, The Wake of Jamey Foster, The Miss Firecracker Contest) who should be required to come back to the New York stage more frequently than she does.  Their guitar-struming, sunnily disposed son Rick is played with acute indifference by Raviv Ullman (Russian Transport), and their pragmatic, family priest, Father Donald, is realized by none other than Richard Chamberlain, who became a television star in 1961 on Dr. Kildare and headlined innumerable miniseries in the 1980’s.  Ozzie, Harriet, Rick and Father Donald are all waiting for the arrival of David, played by Ben Schnetzer (Pride, The Book Thief) in a dazzling tour-de-force, who’s coming home from the fighting in Vietnam.  What they don’t know, but we soon learn, is that David is coming home blind.  When he’s delivered to them at their house by Sergeant Major, a spot-on Morocco Omari, it’s clear that David is troubled by more than just blindness but, since they’re Ozzie & Harriet, they decide they’ll be able to handle anything and will restore their son to health thru love, sunshine and the occasional song plucked by Rick on his trusty guitar. 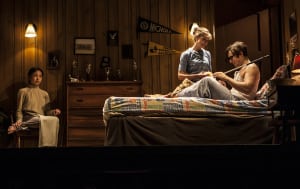 As time passes and David’s mental condition deteriorates, Rabe explores what happens to the idyllic American family when life doesn’t go as planned.  The scales fall away exposing anger, fear, bigotry, self-righteousness and hatred.  Slowly but surely, Ozzie and Harriet’s relationship begins to fray under the strain of caring for a son they don’t understand and don’t love anymore.  David stokes their dysfunctional fire by encouraging them to step over the threshold of mental stability by letting their darkest desires and ugliest recriminations loose, all the while being shadowed by a Vietnamese girl, Zung, played with lovely, silent mysteriousness by Nadia Gan.  Zung represents David’s guilt in abandoning the girl he loved when he left Vietnam because it was more expedient and he knew his uptight, religious family wouldn’t be able to handle him bringing home ‘a yellow dog’ as a wife.  David has seen things and committed atrocities that embody the worst nightmares for Ozzie and Harriet, and they simply can’t cope with the new reality that David is foisting on them with an eager vengeance.  To reset their equilibrium, Ozzie, Harriet and Rick embark on a course of action that’s as horrifying as it is necessary. 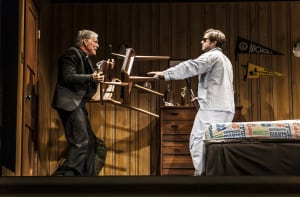 The performances in this revival are superb.  In dark monologues filled with self-reflective angst, Pullman plumbs the depths of Ozzie’s soul with thoughtful, incisive delivery that illuminates a good man’s struggle with evil and self-doubt.  For her part, Hunter’s physical manifestation of busyness includes the endless shuttling of beverages and snacks, cleaning and vacuuming, but we’re also seeing ‘the perfect housewife’ falling apart in front of our eyes.  Even her faith can’t save Harriet as she watches her son, David, retreating into oblivion and her perfect family collapsing in on itself.  She begs Father Donald to ‘talk some sense’ into David but their priest gets a rude awakening from a veteran who doesn’t have time for pious counseling.  Chamberlain lends his role the requisite stature and eloquence, and turns on a dime when challenged with malevolent relish.  It’s nice to see him on-stage agin in a role that allows him to flex his acting muscles in something substantial. 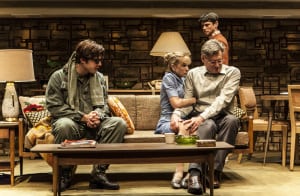 As Rick, the adorable Raviv Ullman is the collective conscience of both the family and the nation.  When anything gets too ugly or too intense, Rick simply goes upstairs to study, out to the kitchen for another piece of fudge, or – as we learn later – for a drive in the family car to bang some piece of tail he’s picked up from the wrong wide of the tracks.  He’s homespun goodness wrapped up in a molotov cocktail waiting to explode.  As for Ben Schnetzer’s shellshocked David, he’s already lit his fuse and he’s burning brightly – we’re just waiting for his bomb to go off.  Wisely, Schnetzer doesn’t overplay the ‘blindness’ metaphor, nor does he overplay the ‘guilt’ metaphor.  He is as heartbreaking as he is terrifying.  No wonder Harriet is drawn to him like a moth to a flame.

To be sure, at three hours, Stick and Bones is too long and would benefit from some careful and judicious trimming.  I think it could be an even more powerful piece at a shorter length, without sacrificing any of the wonderful build-up of emotion and dysfunction that is key to its being.  But even as it is, Stick and Bones is a haunting, provocative piece of writing that anyone who cares about the theatre should see.  Rabe has written an eviscerating condemnation of society and its reaction to war, and The New Group’s fantastic production and cast make you feel every aching moment of it.