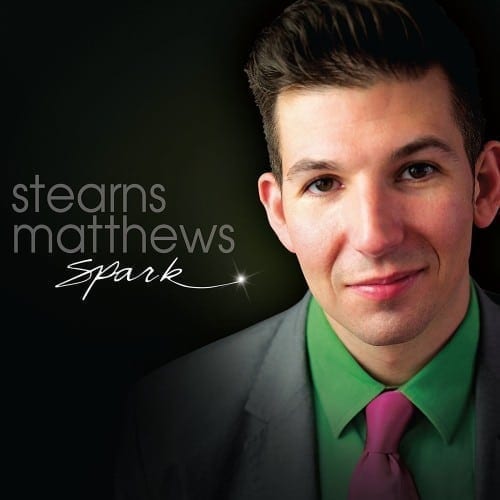 In a smashing recording debut, singer Stearns Matthews has put together a terrific collection of songs in Spark, an apt title for a disc that continues to surprise you even after multiple hearings.  Beautifully produced by the estimable Paul Rolnick for Zevely Records, Matthews has wisely chosen accompanist, musical director and arranger Christopher Denny to help guide him through his first outing in the studio.  The results, in a word, are sensational.

Matthews possess a light, but flexible, lyric tenor that soars off into the stratosphere on the mere hint of an orchestration.  He can put real heft behind it, as he does on Stephen Schwartz’s “The Spark of Creation,” where it swells to dramatic intensity.  Or he lets it whisper like a trailing vine, as he does on Rodgers & Hart’s “My Romance” which he builds into a three-act play, the way a young Barbra Streisand did before she became so self-conscious.

It’s an eclectic disc, to be sure, but why not?  Matthews’ random taste appears to be an essential part of his charm as a singer and as a performer.  (In other words, if it strikes his fancy – he’ll sing it.)  There are inspired choices, like the haunting “Drift Away” from Scott Frankel & Michael Korie’s brilliant musical, Grey Gardens, and John Bucchino’s adorable “My Alligator and Me” which Matthews sings with an earnestness that’s without guile or sentimentality.  Other songs are a bit more curious, such as “Raindrops Keep Falling On My Head” (of all the great Bacharach & David songs out there, why this one?) and Roger Miller’s shopworn “King of the Road.”  But even these chestnuts he sings with warmth and a sense of purpose.  You know a singer is doing something right when, the minute you hear his voice, you start compiling mental lists of all the other songs you’d like to hear him sing.

Denny’s arrangements, as one would expect from an artist of such impeccable taste, are gorgeous and lush.  They support the timbre of Matthew’s voice while gently lifting and guiding him where he wants to go in each selection.  They are spare when Matthews only needs a guide wire, such as on Kander & Ebb’s under-appreciated “My Own Space,” and they’re more fleshed out when Matthews wants to cut loose, as he does on Don Gibson’s “I Can’t Stop Loving You.”  Someone spent a lot of money on an orchestra for this recording – complete with strings! – and the results are worth every penny.  Matthews has a terrific voice and a serious talent.  But he was smart enough to surround himself with the best and the proof is in the eleven tracks that comprise this auspicious Spark!