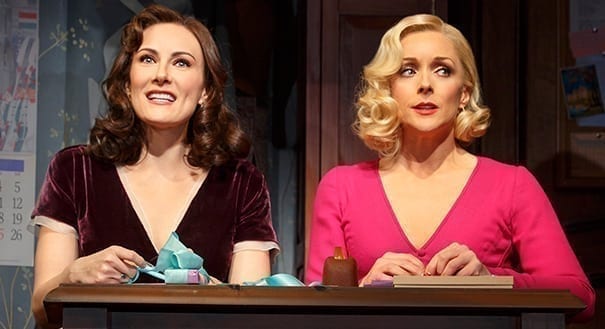 Divine, decadent and delirious!  What puny adjectives to describe the Roundabout’s incandescent new revival of Bock & Harnick’s glorious musical, “She Loves Me.”  A veritable Faberge egg of a score, wrapped around an enchanting story that’s been the basis for multiple film variations, there’s nothing like seeing “She Loves Me” live and in-person to reaffirm your belief in love and humanity.  And, like his glorious, 1993 revival (also at Roundabout), Scott Ellis’ current revival is a sumptuous valentine for musical theatre audiences.

Set in Budapest in 1934, “She Loves Me” is the timeless story of the Maraczek Parfumerie and its employees who search for love in between waiting on customers and wrapping packages.  Newest to arrive as a clerk is the young and pretty Amalia Balash (a wonderful Laura Benanti) who gets off on the wrong foot with the senior clerk, Georg Nowack (the perfect Zachary Levi), when he loses a bet with Mr. Maraczek (a blustering Byron Jennings) that Balash can’t sell a customer a leather, candy box.  She does, of course, and he fumes, but they’re both love-struck even if they don’t know it yet.  The rest of the shop includes Ladislav Sipos (a terrific Michael McGrath) whose only concern is retaining his position, Arpad Laszlo (the fantastic Nicholas Barasch) who sees advancement from being a delivery boy in his future, as well as a pair of feuding lovers: Ilona Ritter (the delicious Jane Krakowski) and Steven Kodaly (an ultra-smooth Gavin Creel), who has his hand in multiple cookie jars around town.

The only caveats for this writer are that, occasionally, both Benanti and Creel use gestures and employ line-readings that are too contemporary.  To be sure, they get the laugh, but they’re not ‘period’.  Additionally, the orchestrations have been altered detrimentally in the “Finale” with Amalia and Georg.  As the strains of “Dear Friend” are heard the strings rise to a climax and – unaccountably – those string parts have been removed which is a great shame.  But these are minor quibbles that most people won’t even notice.  Overall, on David Rockwell’s sumptuous jewel-box of a set, and wearing Jeff Mahshie’s gorgeous costumes, this dream cast is an utter joy to watch.  As we all know, the show itself is a masterpiece – every song is a gem – and, thankfully, all the stars align to make this “She Loves Me” a welcome addition to the pantheon of previous, memorable productions.