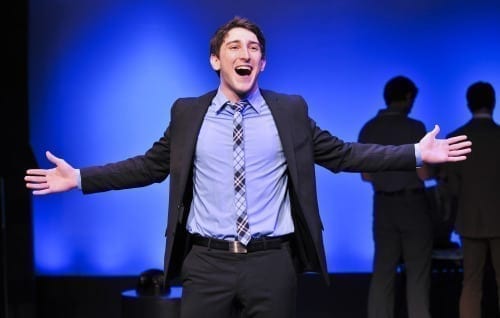 York Theatre’s ‘Musicals in Mufti’ series describes itself as “musical theatre gems in staged concert performances,” and their current production of Julius Epstein & Stephen Sondheim’s Saturday Night fits that description perfectly. The only thing better than seeing it done ‘in concert’ would be to see Saturday Night in a full production, especially with the talented, exuberant cast The York has assembled for this all-too-brief run. 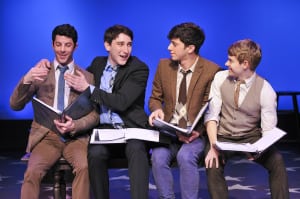 The origins of Saturday Night are now legendary. Commissioned by designer/producer Lemuel Ayers and based on Julius & Philip Epstein’s play Front Porch in Flatbush, Saturday Night was the first musical score written by a young Stephen Sondheim in 1954.  The show was supposed to open the next year on Broadway but its capitalization fell short and, in August of 1955, Ayers died at age 40 bringing Saturday Night to a halt.  Flash forward to the late 1990’s when Sondheim finally saw Saturday Night produced, first at London’s Bridewell Theatre, then at Chicago’s Pegasus Players and finally in a sublime production at New York’s Second Stage in early 2000.  The Second Stage production, directed & choreographed by Kathleen Marshall, starred David Campbell, Lauren Ward, Christopher Fitzgerald and Andrea Burns, and produced a superb cast recording on Nonesuch that has kept the show’s music alive and prospering with a new generation of musical theatre performers.

If casting is 95% of the battle (and Geoff Josselson is credited at The York), this Saturday Night has already won the war.  (Though it’s hard to imagine any young performer working today who wouldn’t give anything to be in this particular Sondheim show!) In the lead roles of Gene and Helen, the handsome Ben Fankhauser (Davey in Newsies) and the lovely Margo Seibert (Adrian in Rocky) are wonderful.  Together they make “So Many People,” the show’s most beautiful ballad, a heartfelt gem.  Gene’s merry band of brothers includes: Matthew Bauman as Ted, Greg Kamp as Artie, scene-stealer Jared Loftin as the penny-pinching Ray and Jeremy Greenbaum as Dino; together their harmonies – both singing and acting – are spot-on.  As ladies-man Bobby, Andrew Keenan-Bolger is terrific, and as Mildred, the girl who all the guys must share, Dana Steingold is a delicious treat.

In the secondary leads of married couple Celeste and Hank, the supremely talented Lindsay Mendez (Dogfight) and Matthew Scott (Sondheim on Sondheim) are a delight.  Both have superb voices and they turn “I Remember That,” a song where each reminisces about their first date together, into a comic two-act play.  It’s easily the most charming song in Sondheim’s score and Mendez and Scott bring a genuine warmth to it that’s moving.  (Note: though many people think Sondheim’s “I Remember That” is an homage to Lerner & Lowe’s “I Remember It Well” from Gigi, Sondheim actually wrote his song before Gigi was written.  It’s possible Lerner & Lowe heard Sondheim’s tune in one of many backer’s auditions that were done for Saturday Night, but it’s also possible that “I Remember It Well” in Gigi is a reworking of a song with the same title Lerner had written with Kurt Weill for Love Life in 1948, a show that was never recorded but, by his own admission, was an early influence on the young Sondheim.) 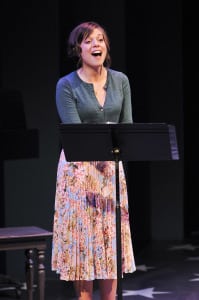 Rounding out The York cast in a variety of supporting roles are Olli Haaskivi as Gene’s put-upon cousin Eugene, Michael Thomas Holmes as Mr. Fletcher, Kenita Miller as Florence, Lance Robers as Clune and the invaluable Jim Stanek as Mr. Fisher.  Stanek also plays the Male Vocalist who gets to croon Sondheim’s pastiche to Rudy Vallee, “Love’s a Bond” which he does with flair and style. 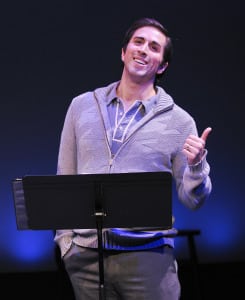 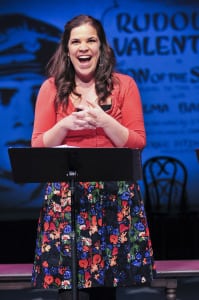 The York’s ‘Mufti’ production also boasts swift yet simple staging by director Stafford Arima (who uses some rolling music stands ingeniously) and musical supervision by Sondheim specialist, Paul Gemignani.  Special mention should be made of Mark Mitchell’s excellent piano accompaniment and Greg Joseph’s percussion; they  magically replace an entire orchestra in a tiny space.  There’s a sweetness and lightness to the music in Saturday Night unlike anything else in Sondheim’s canon.  It’s a show that makes you smile from start to finish and this fresh-faced cast embodies its spirit perfectly.  It’s been almost 15 years since New Yorkers have had the chance to see Saturday Night.  Don’t let this one pass you by! 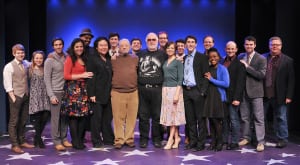