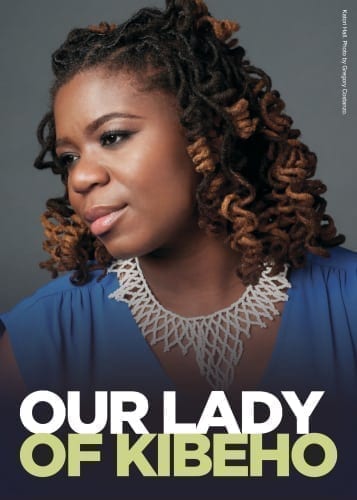 Katori Hall’s Our Lady of Kibeho is currently on view as part of the Signature Theatre’s Residency Five series productions.  Directed by Michael Greif (Rent) with a top-notch cast, it’s a powerful and potent alchemy of the theatrical arts, combining an effective blend of emotion-filled storytelling, music, set design, lighting and special effects that can only be appreciated on-stage and in real time.  Hall takes as her subject the incidence of an apparition of Mary to three students of a village school in Kibeho, Rwanda in 1981 and 1982, and illuminates the process the Roman Catholic Church uses to prove or disprove matters of official apparitions of Mary.   Well known incidents of Marian apparition include Our Lady of Fatima and Lourdes, but several other apparitions were verified but are little known, including this particular incidence of revelation in continental Africa. 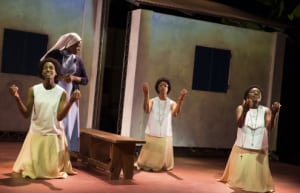 The lead roles of the first girl to “see” the mother of God, Alphonsine Mumureke, and the priest in charge of her school, Father Tuyishime, are strongly portrayed by the charismatic Nneka Okafor and Owiso Odero.  Without their riveting portrayals the production would be less focused and not as powerful.  A weak link of the production, however, is the key role of Father Flavian portrayed by T. Ryder Smith.  Flavian is a Vatican emissary whose assignment brings him to Africa to assess the claims of an official Marian apparition, but Smith employs a sketchy Italian accent which becomes a distraction in an otherwise unassailable production.   The process of evaluating the apparition is complicated by the cynicism of the local second-in-command at the girls’ school, Sister Evangelique, a skillful Starla Benford  in a challenging, multiple-layered role, as well as the local Bishop portrayed by Brent Jennings.  Benford is effective and heart-breaking as a nun whose faith is brought into question in an obvious echo of John Patrick Shanley’s Doubt: A Parable in a bit of role reversal where the priest and nun are both conflicted with the truth. 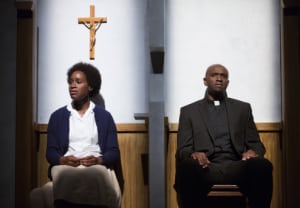 Credit must be given to Greif for his seamless production and also to Michael McElroy for his contributions of original music and musical direction.  The girls at the school often sing in lilting choral arrangements within the context of the play, though the show is clearly not a ‘musical’ in the traditional sense.   The program cites Dawn-Elin Fraser as dialect coach whose work is admirable, though she apparently never had time to assist Smith with his role.   Also of note is the fluid set design of Rachel Hauck which allows for smooth transitions as the story progresses. 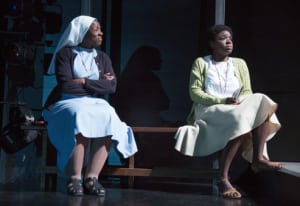 Signature deserves credit for offering its state-of-the-art facility to produce first-rate productions for its resident playwrights.  Hall takes  a difficult story and creates a moving portrait of a difficult and complicated spiritual journey.  Our Lady of Kibeho‘s large cast effectively transport the audience to Rwanda where the horrors of that country’s internal conflicts are foreshadowed in this harrowing story of fear, faith and fate.