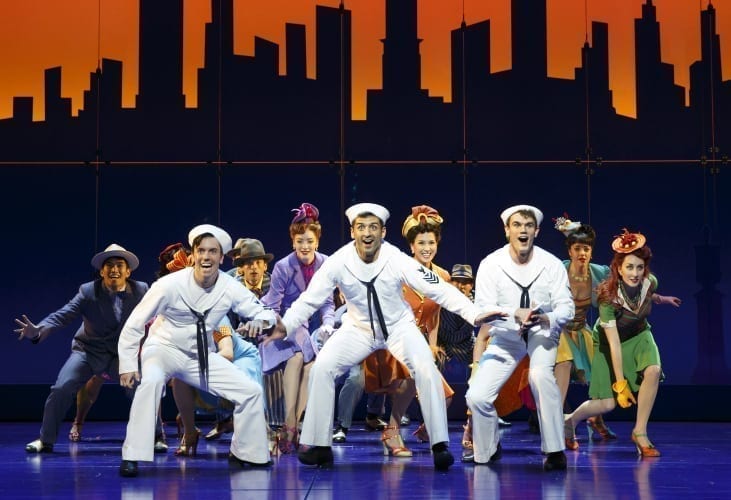 Fantastic, sensational, incredible…what puny adjectives to describe the mind-blowing revival of On The Town that has swept into the Lyric Theatre!  Boasting an amazing 28-piece orchestra expertly led by musical director James Moore, this stunning revival, cunningly directed by John Rando and ingeniously choreographed by Joshua Bergasse, is so breathlessly wonderful – so life-affirmingly good – that it leaves jaded theatre critics scratching their heads in amazement and searching for new adjectives to heap praise on everyone involved.  So let’s get started! 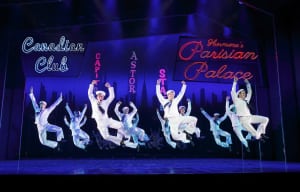 First produced in 1944 when WWII was still raging across the globe, Leonard Bernstein and Comden & Green’s glorious score is filled with soaring melodies, jazzy harmonies, complicated rhythms and dazzling orchestrations.  Along with Wonderful Town (1953) and his masterpiece with Stephen Sondheim, West Side Story (1957), On The Town stands as a cornerstone of the American musical theatre, with songs such as “New York, New York,” “Lonely Town,” “I Can Cook Too” (with a lyric by Bernstein), “Lucky To Be Me” and “Some Other Time” immediately entering the lexicon of the great American songbook. 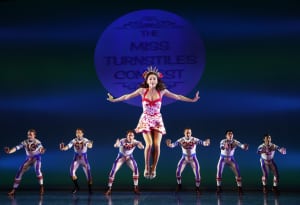 Megan Fairchild & the men’s ensemble in “On The Town” (photo: Joan Marcus)

It’s story is simple: three sailors – Gabey, Ozzie & Chip – leave their ship on a 24-hour shore leave looking for love and adventure in New York City.  Gabey spots a poster bearing the image of Miss Ivy Smith, who’s just won the monthly ‘Miss Turnstiles’ title for the IRT subway line, and the three sailors spend the rest of their day looking for her.  Gabey finds her at Carnegie Hall, of course, but complications ensue, including Ozzie falling in love with Claire DeLoon (an anthropologist studying primitive man) at the Museum of Natural History and Chip falling in love with Hildy Esterhazy (a voluptuous, taxi-driver with a libido in over-drive).  They all end up in Coney Island before returning to the Brooklyn Navy Yard to re-board their ship, just in time to watch three new sailors begin their 24-hour shore leave.

On The Town‘s previous revivals, in 1971 with Donna McKechnie, Phyllis Newman and Bernadette Peters (directed and choreographed by Ron Field) and in 1998 with Perry Layton Ojeda, Jesse Tyler Ferguson and Lea DeLaria (directed by George C. Wolfe and choreographed by Keith Young with Joey McKneely), didn’t connect with audiences, resulting in short runs for each.  But this new revival, which fills the enormous space at The Lyric (formerly The Foxwoods, The Hilton, etc.) with style and flash, seems destined for a long, healthy run and multiple awards come Tony time. 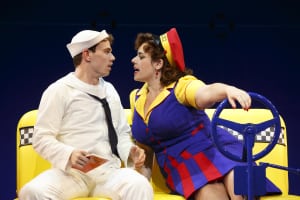 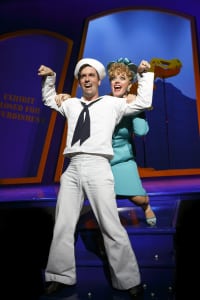 Deciding who to nominate among the exemplary cast – each one a legitimate triple-threat –  will be a challenge, but let’s start with Tony Yazbeck, who plays Gabey.  With his dark hair and chiseled physique, Yazbeck (Chicago, Gypsy and A Chorus Line) has been a star on the rise for years but comes into his own as a leading man in On The Town.  His singing is glorious and we’re fortunate his character gets to sing both “Lonely Town” and “Lucky To Be Me” – two of the loveliest ballads Bernstein ever wrote.  Yazbeck’s acting is superb as he balances Gabey’s ‘aw-shucks’ naivety with a smoldering sex appeal that comes pouring out of him in Bergasse’s gorgeously staged ‘dream ballet’ in the second act.  His dancing is breathtaking – combining the masculinity of Gene Kelly with the grace and class of Fred Astaire.  He is truly a star.

Yazbeck’s two shipmates are stellar, too.  As the fresh-faced Chip, Jay Armstrong Johnson (The Most Happy Fella, Sweeney Todd) is a giddy delight.  Utterly adorable and oozing charm, Chip meets his match in the raucous incarnation of Hildy, played to the hilt by the luscious Alysha Umphress (American Idiot, On A Clear Day…, Priscilla…).  Umphress breaks into the starring ranks with her sassy turn, knocking it out of the park singing “Come Up To My Place” and “I Can Cook, Too” as she uses every feminine wile in her arsenal to seduce the helpless Chip.  As Ozzie, Clyde Alves (Bullets Over Broadway) is a revelation.  With terrific comic timing, a beautiful voice and sensational dancing, he holds his own against the Claire of Elizabeth Stanley; together they turn their duet, “Carried Away,” into a show-stopper of epic proportions.  For her part, Stanley (Million Dollar Quartet, Cry-Baby, Company) nails every laugh and sings Bernstein’s difficult ‘soprano role’ with panache.  Resembling a young KT Sullivan, Stanley is a continuing scene-stealer in a cast stuffed with showoffs.  In the tricky role of Ivy Smith, the lovely New York City Ballet dancer Megan Fairchild makes an impressive musical-theatre debut.  Though she’s still growing as an actress, her dancing – as one would imagine – is thrilling.  Like a young Leslie Caron or Cyd Charisse, watching Fairchild whirl about en pointe and throw herself into Yazbeck’s arms is like watching a vintage MGM film before your very eyes. 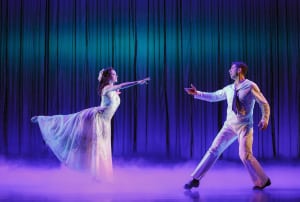 The supporting roles, too, are filled by Broadway veterans who are grabbing their roles and shaking new life into them.  As the workman who opens the show with the classic line, “I feel like I’m not out of bed yet,” Phillip Boykin’s ringing bass-baritone immediately assures the audience they’re in for a helluva ride.  Stephen DeRosa plays a handful of character roles – each with a savvy hilarity that will make you smile.  Michael Rupert (Falsettos, Sweet Charity) relishes the role of Pitkin, Claire’s fiancee-professor who chases the sailors and girls across the city claiming ‘he understands’ Claire’s fascination with Ozzie.  Veteran ham Jackie Hoffman also plays a handful of character parts but finds lunacy in her over-the-top Maude P. Dilly, Ivy’s voice-teacher who does her best to keep Ivy from Gabey so she can keep working at her job as a hoochie-coochie dancer out on Coney Island.  But it’s Allison Guinn who almost steals the show as Hildy’s obtrusive roommate, Lucy Schmeeler.  Between Guinn’s comic sneezing and shameless pratfalls, they may need to invent a new award for her.

Director Rando keeps everything moving seamlessly and cinematically.  Moving the sailors and their girls around the city is aided mightily by Beowulf Boritt’s brilliant projections which allow taxi rides and subway trips to happen magically.  The cast’s dashing to and fro is also facilitated by Jess Goldstein’s period-perfect costumes and Jason Lyons’ sumptuous lighting.  The dancing deserves special praise in that it’s effortlessly performed and perfectly ‘together’.  Bergasse’s choreographic language has a muscularity and sexiness that his dancers execute brilliantly and the audience is treated to one visual treat after another in watching Bergasse paint his pictures in movement and dance.

Some lines have been tweaked here and there, with Robert Cary & Jonathan Tolins being credited with “additional material.”  There’s a running gag throughout On The Town with a girl named Flossie and Flossie’s friend (riotously played by Holly Ann Butler and Lori Ann Ferreri) who engage in a running banter about Flossie’s boss.  At one point, Flossie and her friend are switched out for two guys who are obviously gay but saying the same things as the girls.  It’s smart and funny and shows a contemporary sense of humor that’s in keeping with the spirit of the show itself. 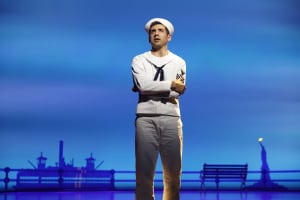 Tony Yazbeck in “On The Town” (photo: Joan Marcus)

So it’s the combination of a stellar cast, led by Yazbeck, a glorious score brimming with wonderful songs, a decadent 28-piece orchestra and the artistry and vision of a director and choreographer who understand exactly what makes On The Town a masterpiece – and then execute it brilliantly.  If you care about the musical theatre don’t miss this superb production of a classic show.