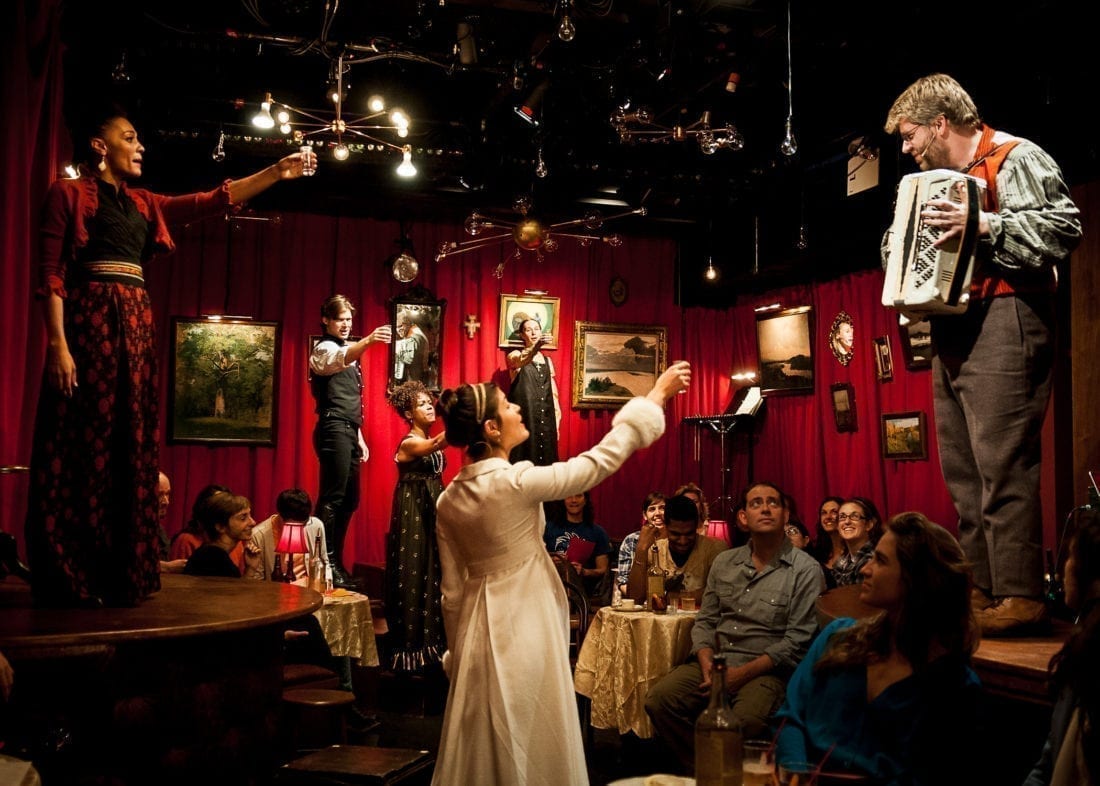 Natasha, Pierre and The Great Comet of 1812, Murder Ballad and Moonlight & Love Songs

Interactive musicals are all the rage, but an old-fashioned love story convinces more!

It’s the summer of ‘interactive musicals’ but I’m in the minority where two critically acclaimed shows are concerned.  While I appreciate the hard-working casts and design-laden creativity of Natasha, Pierre and The Great Comet of 1812 and Murder Ballad, I find less to applaud in their overrated scores.  Having grown up on Rodgers & Hart, Cole Porter, Irving Berlin, Frank Loesser, Kander & Ebb and Stephen Sondheim, I’m spoiled for choice, but the meandering, repetitive music of both Dave Malloy, who wrote Natasha…, and Juliana Nash, who wrote Murder Ballad, wore on my nerves after just a few minutes.  There’s craft at work, to be sure, and as a trained musician I recognize what both these composers are doing.  I “get it” – I just don’t like it.  Additionally, both shows employ ‘stream-of-consciousness’ lyrics that are laden with exposition and contain no rhyming schemes.  But perhaps this lack of sophistication and ‘common man’ content are what non-musical audiences are responding to in these shows.  To be sure, both Natasha… and Murder Ballad are triumphs of style over substance.  Rachel Chavkin has directed Natasha…, a caffeinated adaption of a portion of Tolstoy’s War and Peace, within an inch of its life in an expanded Russian cabaret setting (dinner included) that dazzles the eye.  Similarly, Trip Cullman has directed Murder Ballad, a noir love triangle (unbelievable as it may be) that ends in violence, in a bar where some of the audience sit directly in the action of the performers.  Both of these shows are ‘events’ and are allowing audiences to experience theatre in a new way.  I just wish their scores were as accomplished as their presentations.

As the first entry in this year’s GAYFEST NYC festival, Scott C. Sickles’ touching Moonlight & Love Songs benefited from resourceful actors, despite limited production values.  The excellent Gerald McCullouch (CSI) and Nick Bailey (Hit the Wall) were utterly convincing as Harry and Jim, a middle-aged architect who falls for a beautiful college boy with a secret, as were Kathryn Markey as Harry’s well-meaning sister and Christine Verleny as Jims cancer-ridden mother.  Sickles should rethink his use of film references (he doesn’t need them), but he writes sharp dialogue and opts for the more interesting ending in Moonlight, in which McCullouch’s presence lifted the entire production.  GAYFEST NYC concludes with Gross Indecency: The Three Trials of Oscar Wilde and The Loves of Mr. Lincoln.