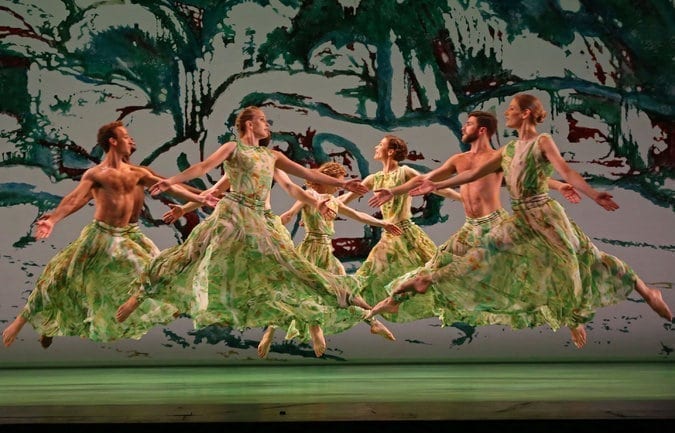 The world premiere of the Mark Morris Dance Group’s production of Acis and Galatea took place at the University of California, Berkeley, this past April and was subsequently seen in Boston in May before being presented in New York as part of Lincoln Center’s 2014 Mostly Mozart Festival, August 7-9.  A charming fusion of opera, theatre and dance, director/choreographer Morris has skillfully combined storytelling with movement and music to stage a “pastoral” that charms as earnestly as it entertains. Handel’s buoyant score, arranged by no less than Mozart (!) seventy years after it was written, proves a melodic delight and gave the four primary singers: Thomas Cooley (Acis), Yulia Van Doren (Galatea), Isaiah Bell (Damon) and Douglas Williams (Polyphemus), a serious workout in terms of projection and diction since they were performing in the David H. Koch Theater (formerly known as the State Theater), designed for dance and not for un-amplified singing. 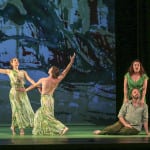 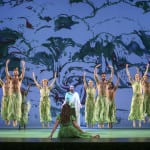 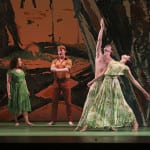 For the most part, Cooley and Van Doren fared well in the lead roles though both were under-powered from time to time in terms of their vocal support and visual characterization.  Bell fared better vocally, particularly with two of the score’s more deceptively difficult arias, “Shepherd, what art thou pursuing” and “Would you gain the tender creature.”  The star of this production (as I suspect he is in every production in which he appears) was Douglass Williams singing the role of Polyphemus.  Williams, a strapping, handsome, god-like presence who sings with powerful authority and dominates the stage with his magnetic personality, was particularly delicious in his recitative at the top of Act II, “I rage I melt,” followed by the aria “O ruddier than the cherry.”  Morris staged both of these to allow the monster Polyphemus  to interact with the dancers in ways both salacious and frisky, then allowed him to lounge about on the stage doing some work-out stretches before wrecking havoc upon the romance between the semi-divine nymph Galatea and Acis, the shepherd whom she loves. 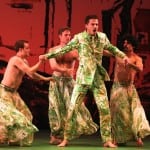 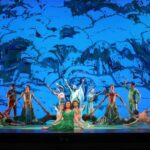 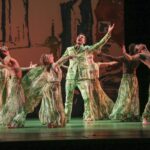 Throughout Acis and Galatea, Morris’ choreography put the emphasis on pairs of lovers romping bucolically which both propelled the story narrative and kept the piece spinning forward at a brisk clip.  The 18-member company danced energetically and beautifully, wearing diaphanous, flowing skirts designed by Isaac Mizrahi.  Despite some initial, questionable tuning, the 30-member Philharmonia Baroque Orchestra played well for music director Nicholas McGegan, but it was the glorious 18-voice Chorale whose choral work was about as close to perfection as we’re ever likely to hear.