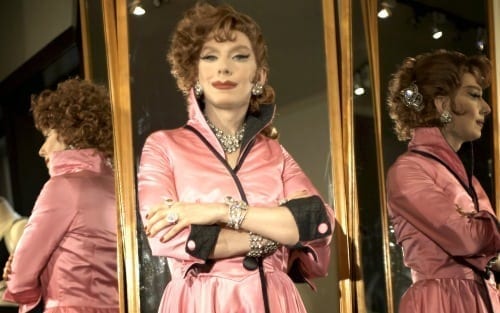 Lypsinka! The Boxed Set & The Passion of the Crawford
Soundtracks created by John Epperson
Engineered by Alex Noyes
Directed by Kevin Malony

Shattering!  Cataclysmic!  Divine!  What puny adjectives to describe the goddess of show business, Lypsinka!  A singular creation of glitz, glamour and gorgeousness, Lypsinka – a.k.a. John Epperson –  has finally returned to New York after an absence of almost a decade to grace us with three shows running in repertory: Lypsinka! The Boxed Set (2000), The Passion of the Crawford (2005) and John Epperson: Show Trash (2004).  Individually they’re each a terrific entertainment, but together, as The Trilogy, they’re quite simply life-changing. 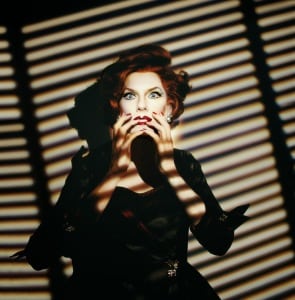 Lypsinka! The Boxed Set is a showcase for Epperson’s particular genius at channeling women on the verge, bringing them to life before our eyes with an intuitiveness that’s as dazzling as it is hilarious.  He makes it look effortless, but don’t be fooled.  What Epperson does takes meticulous work and practice on a scale that can’t be appreciated by mere mortal actors.  To watch his artistry is mesmerizing in its totality of lip-synch, character study and physical embodiment.  That Epperson changes from woman to woman in the span of a nanosecond makes his accomplishment all the more breathtaking.  There is simply no one else on the face of the earth who can do what Epperson does, which makes any appearance by Lypsinka an event to be devoured and cherished.  The Boxed Set is a particular jewel in his crown because of the spectrum of women he brings together as a comment on femininity, entertainment and show-business madness.  Epperson has a knack for selecting choice tidbits of grande dame over-acting and self-indulgence which he strings together into brilliantly edited soundtracks.  Whether it’s a film sound-bite featuring Bette Davis in Mr. Skeffington, Judy Garland in I Could Go On Singing, Gloria Swanson in Sunset Boulevard, Faye Dunaway in Chinatown, Piper Laurie in Carrie or Elizabeth Taylor in BUtterfield 8, or a vocal cut from a singer like Shirley Bassey, Fay McKay, Ethel Merman, Penny Fuller, Frances Faye or the great Dolores Gray (Epperson’s heroine and Lypsinka’s icon), Epperson manages to celebrate the magnificence of these women while also acknowledging the camp value of such moments.  It goes without saying that technical elements for Lypsinka’s performances, specifically sound (by Matt Berman) and lighting (by Mark Simpson with Jeremy Owens), must be of the highest level in order to create the proper illusion and for her ‘magic’ to work.  Happily, all these elements align in this current incarnation of The Boxed Set to dizzying, delirious effect. 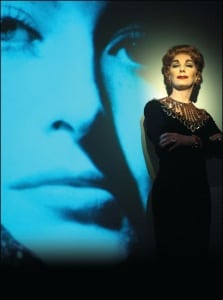 Lypsinka in “The Passion of the Crawdford” (photo: Francis Hills)

As one would imagine, the high-voltage actress Joan Crawford always features prominently in Epperson’s creations, including The Boxed Set.  Fortunately, back in the 1960’s and 70’s the publicist/writer/historian John Springer did a series of interviews with movie stars at The Town Hall in New York, including Myrna Loy, Lana Turner, Bette Davis and Joan Crawford.  That interview with Crawford, which occurred on April 8, 1973, serves as the cornerstone for Epperson’s The Passion of the Crawford, which is lip-synched in its entirety by Lypsinka as Crawford and Steve Cuiffo as Springer (w/ Scott Wittman playing Springer at select performances).  It’s a delicious, jaw-dropping ‘chat’ containing Crawford’s views and opinions on her career, Hollywood, politics and changing styles.  Epperson is particularly brilliant at embodying Crawford, complete with the furtive downcast glances and darting eyes to express her pleasure or displeasure with whatever Springer is saying to her.  Several times Springer reaches over to ‘touch’ Crawford and Lypsinka recoils in horror – and appropriately so.  Goddesses are for worshiping, not for touching!  The evening is capped by several ‘dramatic’ readings Crawford did, notably one on Hollywood Palace in 1967 from a stupefying poem by Milton Geiger called “The Dreamer” about Alice in Wonderland and Little Boy Blue that has to be heard to be believed. 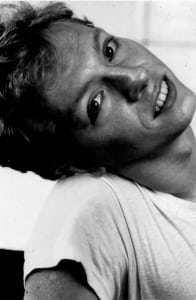 The third show in The Trilogy‘s triumvirate may be the most telling and revealing of anything Epperson has ever done.   Entitled John Epperson: Show Trash, it’s a charming window into Epperson’s childhood growing up in the tiny town of Hazlehurst, Mississippi, and it’s being seen for the first time in New York in this production.  As a man sans make-up and gown, Epperson makes a compelling and delightful host.  An accomplished pianist and singer, he’s a natural storyteller and, aided by still photographs and home movies from his childhood, he weaves a sweet and fascinating tale of growing up gay, lonely and smitten with the glamour of show business.  His story of how he managed to transport himself to New York and create the mesmerizing persona that is Lypsinka, all while carving out a life for himself, could serve as a template for so many of us who made the same journey, albeit from different circumstances and without high-heels.  On the way to superstardom, there’s heartbreak and sadness coupled with triumphs and joys, and through it all Epperson battles – and continues to battle – with the burden of living with a creation as attention-grabbing as Lypsinka.  It’s a lovely combination of cabaret show and personal memoir that’s given added pathos because of all those friends and lovers we’ve lost over the last three decades who aren’t here to share it with us.