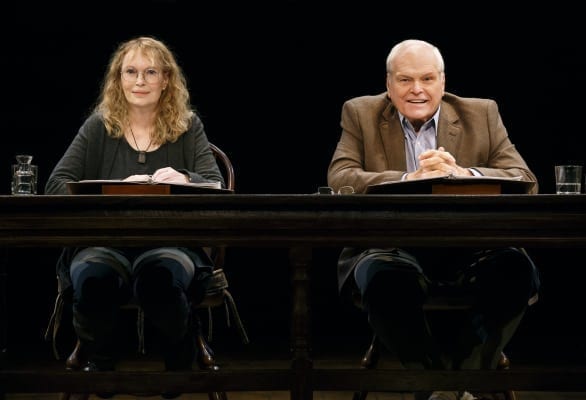 For some reason (no one’s quite sure why), A.R. Gurney’s epistolary, two-hander, Love Letters, is back on Broadway for another go-around at making the bridge & tunnel crowd chuckle and the matinee ladies tear-up with a rotating cast of stars to read the humorous and heartbreaking letters of Melissa Gardner and Andrew Makepeace Ladd III.  Seen in New York in 1989, first at The Promenade before moving to The Edison on Broadway, Love Letters charts the relationship of Melissa and Andrew over the decades and has become a sure-fire staple of community theaters, regional theaters and even the retirement home circuit.  It’s formula is almost fool-proof but practically all of its success hinges on the critical casting of the two actors who sit at a table and read letters to each other for 90 intermission-less minutes.  Some of the pairings have become legendary, such as Elaine Stritch & Jason Robards or Elizabeth Taylor & James Earl Jones; while others have become fodder for jokes, such as Larry Hagman & Barbara Eden, or Tab Hunter & Joyce DeWitt.

In this current revival, efficiently directed by Gregory Mosher and modestly designed by John Lee Beatty (sets), Jane Greenwood (costumes), Peter Kaczorowski (lights) and Scott Lehrer (sound), the opening night pairing of Mia Farrow and Brian Dennehy was a safe, in not particularly inspired, choice.  At the beginning of the piece when both characters are young children, both actors seemed a bit rushed with Farrow missing some possible ‘laughs’ and Dennehy making no discernible attempt at sounding ‘youthful’.  They both improved as the play progressed turning in solid performances that hit the marks even if they didn’t provide the needed spark Love Letters requires to soar.   The one exception to this would be Farrow’s portrayal of Melissa in the final twenty to thirty minutes of the play.  As her character grows more and more emotionally unstable, needy and psychologically unhinged, we are reminded what a terrific actress Farrow can be.  Watching her descent into the abyss was as heartbreaking as it was thrilling.  And one must give Farrow credit for an especially brave performance in light of the public spotlight that’s been cast on her and her family’s trials and tribulations over the years.

Despite the fact it was a finalist for the Pulitzer Prize, I don’t think Love Letters has aged particularly well or is, in fact, a great play.  It’s charming and allows two performers the chance to stretch their acting muscles a bit.  But in this day and age of e-mail, text messaging and Instagram, the idea that people would communicate with each other using paper, pen and stamps seems a quaint proposition, indeed.  Many will find that sad (including myself), but that’s the age we live in now and Love Letters has the unintentional consequence of making ‘older theatergoers’ pine for an earlier era of correspondence.  Whether that’s a good thing or a bad one will be left up to future audiences.