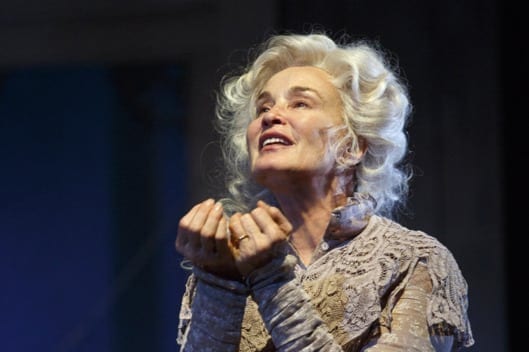 Even though the last revival of “Long Day’s Journey Into Night,” directed by Robert Falls and starring Brian Dennehy, Vanessa Redgrave, Philip Seymour Hoffman and Robert Sean Leonard, was only 13 years ago, the stirring, new revival of “Night” which just opened at the Roundabout feels vibrantly alive and boasts fantastic performances from an acclaimed cast of seasoned veterans.  Directed with an assured sense of pacing and style by Jonathan Kent, this “Long Day’s Journey Into Night” boasts Gabriel Byrne and Jessica Lange as James and Mary Tyrone, and Michael Shannon and John Gallagher, Jr. as their sons James, Jr. and Edmond.  Joining them is Colby Minifie as their maid, Cathleen.  Set on a wonderfully austere set designed by Tom Pye with evocative lighting courtesy of Natasha Katz and period perfect costumes by Jane Greenwood, Eugene O’Neill’s gripping, heartbreaking drama of a family coming apart at the seams has never felt more devastating or more timely.

When it was written in 1942, O’Neill put “Long Day’s Journey Into Night” into a safe at Random House and left instructions it wasn’t to be published until 25 years after his death.  But upon O’Neill’s detain 1953 his third wife Carlotta Monterey transferred the rights of the play to Yale and it was published and first produced in 1956.  It has been haunting audiences ever since.

The cast of this current revival is superb.  Byrne is ideal as the aging, alcoholic actor who needs to be centerstage whether in the theatre or his own home.  Lange is tremendous as a fragile matriarch battling a long-held addiction to morphine while trying to hold her family together.  Shannon finds new layers as the Tyrone’s oldest son, exhausted from battling his father and living in fear his younger brother will not survive him.  For his part, Gallagher is solid as the younger brother, Edmund, but he seemed slightly tentative in his monologues in Act 3 and Act 4 as the play progressed.  But even that’s a minor quibble.

A word to the wise: opportunities to see a masterpiece like “Long Day’s Journey Into Night” don’t come very frequently, especially in a production as thoughtfully and skillfully rendered as this one.  Don’t miss it.