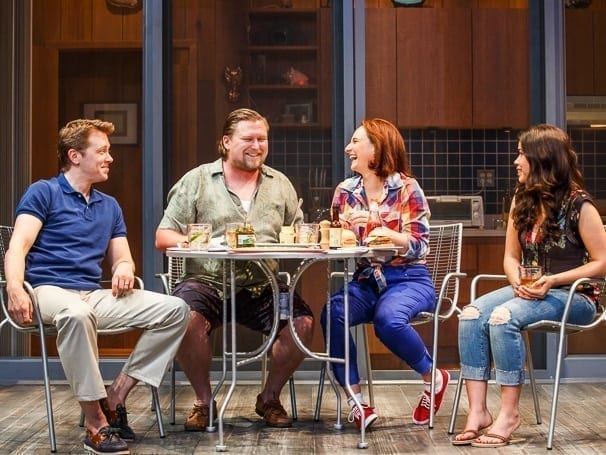 The ghosts of the 1991 Manhattan Theatre Club cast of Terrence McNally’s Lips Together, Teeth Apart loom large over the flaccid, tepid revival of the play that opened at Second Stage last week.  Its original stars, Nathan Lane, Swoosie Kurtz, Anthony Heald and Christine Baranski (who won a Drama Desk), inhabited the roles of Lips Together‘s two couple – Sam & Sally Truman (Lane & Kurtz) and John & Chloe Haddock (Heald & Baranski) – with savvy comic timing and understated subtext, making McNally’s play seem far better than it was.  Unfortunately, the Second Stage company – which is miscast across the board – is out of their depth.  You know you’re in trouble when the best thing you can say about a production is that the set (here by Alexander Dodge) is terrific.

Written as the AIDS crises was spiraling out of control and set in the Fire Island Pines of 1990, McNally takes the unusual approach of examining the epidemic from the perspective of two heterosexual couples grappling with their own fears, prejudices, homophobia and troubled marriages.  The couples are spending the July 4th holiday weekend at the house of Sally’s brother, David, who has recently died of AIDS and left the house to her.  Joining Sally (America Ferrera of Ugly Betty fame), who dabbles as an artist, and her husband Sam (Michael Chernus), who owns a construction company in New Jersey, are Sam’s sister Chloe (Tracee Chimo of Bad Jews fame), a housewife and community theatre devotee, and her husband John (Austin Lysy), who’s the admissions officer of a private prep school in Connecticut.  Chloe and John have three children while Sally and Sam are still trying to have a child in spite of Sally’s multiple attempts to carry a child to term.  We learn early on that Sally and John have had a one night stand, as well as the fact that both Sam and Chloe know about the tryst but are determined to ignore it.  Lastly, it’s revealed Sally is once again pregnant but hasn’t told Sam, and that John is ill with advanced and inoperable esophageal cancer and hasn’t told anyone.  Oh, and no one will get into David’s beautiful swimming pool because they’re afraid they’ll get AIDS. 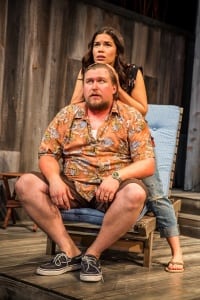 As the weekend unfolds, there’s a running plot line in which Sally grows increasingly concerned about a swimmer she’s seen swim too far out into the ocean.  When she doesn’t see the swimmer return her anxiety mirrors her growing concerns about her pregnancy, her affair with John and her inability to process the loss of her brother.  The lovely Ferrera doesn’t seem to inhabit Sally with the gravitas necessary to anchor her character’s pivotal role in McNally’s quartet of antagonists.  She has several nice moments, and makes more of an impression in an impassioned lashing out at Sam and John in an ‘eleven o’clock outburst,’ but – overall – Sally needs more presence and passion. 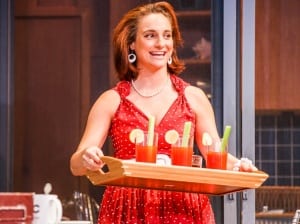 Conversely, chatterbox Chloe – freed from the restraints of her children – provides an endless, running commentary of her inane thoughts, questions about the group’s food and beverage needs and various other anecdotes, all peppered with French phrases and exclamations.  The talented Chimo throws herself into the role with gusto and she gets some modest laughs.  But she’s working too hard, resulting in a performance that’s arch and overbearing.  Chloe’s non-stop talking is a defense mechanism she uses to keep her world spinning forward.  What’s missing in Chimo’s performance is the heartbreaking subtext that needs to lay beneath the surface.  It’s not what Chloe says, it’s what she’s not saying that give her an inner life.  But there’s little evidence of any inner life here. 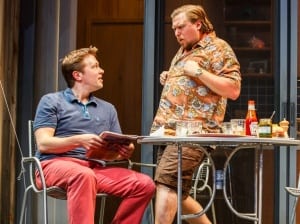 This is true for the other performers in Lips Together as well.  And if Chimo’s working too hard, then Ferrera, Chernus and Lysy aren’t working hard enough.  The cast’s delivery feels listless and disconnected.  There’s no sense of believability or naturalism.  Part of this is the fault of the usually reliable director, Peter DuBois (Sons of the Prophet, Jack Goes Boating, etc.), whose work here appears slack and uninspired.  Of course, it doesn’t help that McNally has his characters frequently address the audience in ‘asides’ that break the fourth wall.  Why write meaningful dialogue that ‘reveals’ feelings when you can have your actors turn to the audience and ‘tell’ them their feelings instead?

At more than 2 1/2 hours with two intermissions, Lips Together, Teeth Apart is too long.  I don’t think the play is necessarily ‘dated,’ but this revival serves neither the play nor the performers to any advantage.  It’s worth noting back in 2010, Megan Mullally quit a production of Lips Together, Teeth Apart directed by Joe Mantello for Roundabout after trying to have her c0-star, Patton Oswalt, replaced.  Ironically, Mullally is now on-stage with Nathan Lane in McNally’s It’s Only A Play, a box office hit but an even worse play than the one from which she bolted.

Did I mention Alexander Dodge’s set is great? 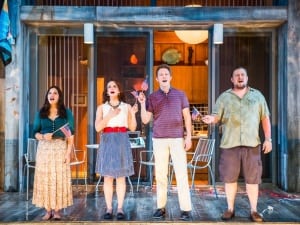 (Note to McNally: any character who’s obsessed with musical theatre and has performed in as many shows as Chloe would recognize the “Overture” to Gypsy playing on the sound system of the gay, next-door-neighbors – she would never mistake it for the the “Overture” to Annie, particularly when she claims she’s desperate to do Gypsy later in the show.  Neither would she agree with Sally that Irving Berlin’s famous lyric is “…there’s no business like the show business.”  That entire plot point is just ridiculous.)