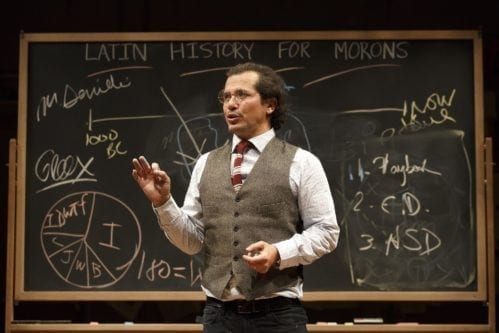 Written and Performed by John Leguizamo
Directed by Tony Taccone

It’s hard to think of another performer in history who’s mounted a succession of solo stage productions with the dramatic scope and cultural impact of John Leguizamo.  Starting off-Broadway with Mambo Mouth in 1990, and Spic-O-Rama in 1992, before moving to Broadway with  Freak in 1998, Sexaholix in 2001 and Ghetto Klown in 2011, Leguizamo has proven time and time again there’s nothing he can’t do.  He returns to his off-Broadway roots at The Public this spring with the shrewdly titled Latin History for Morons which follows his patented blueprint of sociological autopsy by hilarious personal insight.

Ostensibly structured as a lecture by a professor, Latin History for Morons is merely a sly way for Leguizamo to tell us stories about life with his teenage children who are smarter and cooler than him.  What he tries to teach them and what they ultimately teach him is framed thru a prism of historical anecdotes about the various Latino peoples of the world.  Woven throughout these anecdotes, shrewdly directed by Tony Taccone on a clever set by Rachel Hauck, is Leguizamo’s quest for the perfect Latino hero for his son to incorporate into a school presentation.  Unsurprisingly, his son rejects each of his suggestions.  Throughout it all, Leguizamo gives us what has become his specialty – that of an observer of life who can spin even the worst humiliation into comic gold.