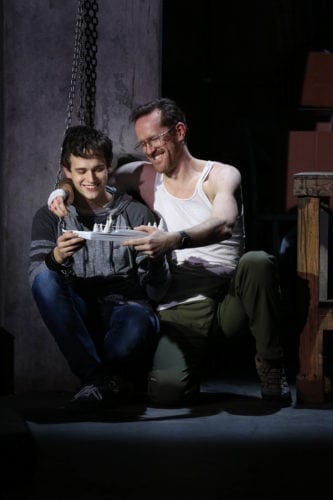 Even for a composer drawn to the dark themes of Cabaret, Chicago, The Kiss of the Spider Woman and The Visit, John Kander’s new story and score for Kid Victory will pose a challenge to audiences unwilling to make a leap of faith with him and his collaborator, lyricist and book writer Greg Pierce.  Following their first collaboration, the rather tepid, 3-part chamber musical The Landing in 2013, also at The Vineyard, Kid Victory explores the psychological ramifications of what happens to a young man, Luke, who’s been kidnapped and held captive for more than a year by his handsome history teacher, Michael, only to be released back to his devout, Christian parents in small-town middle America.  And what if both Michael and Luke were gay and Michael maintained a kind of psycho-sexual hold over Luke?  And what if Luke had fallen in love with Michael, even though he knew his captor was dangerously mentally ill?  And what if everyone in the town sang and danced about it?  Well, that’s Kid Victory and it’s both dazzling and disjointed. Much of it works surprisingly well, but some of it is as wince-inducing as you’d imagine it might be.

Whatever Kid Victory‘s shortcomings, if you love cutting edge musical theatre you’ve got to applaud Kander & Pierce, as well as director Liesl Tommy who helmed an earlier incarnation of the show at the Signature Theatre in Arlington, VA, for taking huge risks and daring to delve into uncharted territory.  Boasting a stellar cast, the performances are first-rate, especially newcomer Brandon Flynn who gives a bravura performance as Luke and Jeffry Denman who is scarily frightening as his captor, Michael.  Ironically, in a bold choice, Flynn never sings a note as Luke.  Everyone around him sings, often inhabiting his thoughts and feelings, but his is a gut-wrenching, physical performance that will haunt you.  Denman, one of the premiere song and dance men working today, plays against type as Michael and his unexpected harrowing turn is a revelation.  Luke’s parents, Eileen and Joseph, are convincingly portrayed by veterans Karen Ziemba and Daniel Jenkins.  Dee Roscioli gets laughs as shop owner Emily who befriends Luke and gives him a job and a safe place to process his feelings.  And as Suze and Andrew, Laura Darrell and Blake Zolfo offer two potential romantic interests for Luke.

The style of Kander’s music is, like the show, eclectic but you certainly hear his ‘voice’ in the music and it’s thrilling to know that, at the age of 90, he’s still rolling the dice and challenging the status quo.